To wear, or not wear, face masks vs COVID: The zigzag road PH is taking | Inquirer News

To wear, or not wear, face masks vs COVID: The zigzag road PH is taking 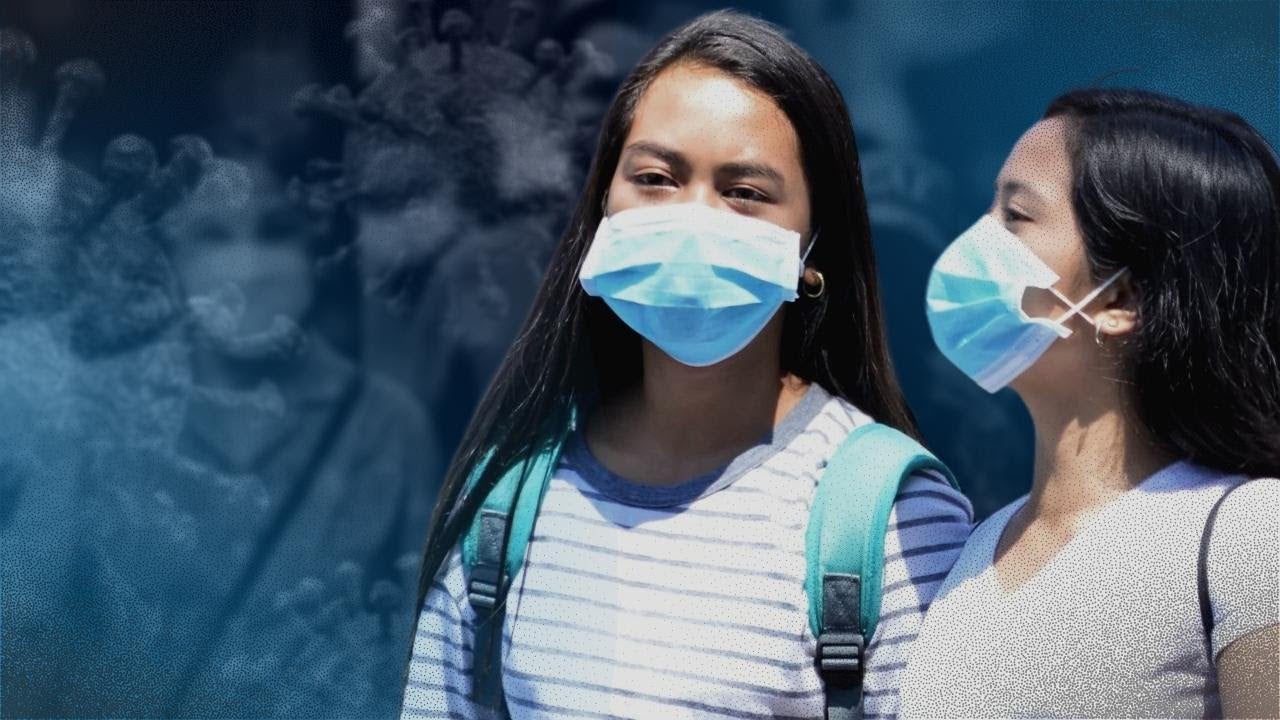 MANILA, Philippines—Last August, the Philippine health department expressed concern and hostility toward a local government’s move to make wearing of face masks against COVID-10 optional. Around a week later, it seemed to warm up to almost the same idea—which might be soon implemented nationwide.

The same resolution, however, emphasized that senior citizens and immunocompromised individuals are “highly encouraged” to continue wearing face masks.

But Vergeire clarified that the policy is not yet in effect until the Office of the President issues the EO—which would serve as the legal instrument or the go-signal for enforcement.

“We had a meeting earlier with the President and until it is articulated through a form of a policy coming from the Office of the President, that’s the time that it has become official,” she said in Filipino in an interview over One News PH.

“We will not yet implement [the proposed face mask mandate] [because] the Office of the President has yet to release the policy (EO),” she added.

Following the announcement, several health experts have expressed concern about the recommended policy—with some pointing out “mixed messages” from the DOH, which they worry could confuse the public.

Last August 31, Cebu City Mayor Michael Rama issued and signed an EO that gave city residents the discretion to wear, or not to wear, face masks in open spaces.

Through EO No. 5 series of 2022—or “An order declaring the use of face mask within the territorial jurisdiction of the City of Cebu as non-obligatory, but a measure of individual self-preservation and protection”—wearing of face mask in open spaces in the city is no longer required.

However, the wearing of face masks remains mandatory in hospitals, clinics, and other medical facilities. The order also stated that the local government will leave it at the discretion of business establishments and building managers whether to require the use of face masks.

Similar to the IATF proposal, the order issued weeks ago emphasized that the use of face masks is still mandatory for persons who are immuno-compromised, sick, or have flu-like symptoms and who were also “strongly advised” to stay at home and seek immediate medical consultation.

In June, Cebu Gov. Gwendolyn Garcia also signed an order lifting the requirement to wear face masks outdoors—a move that was immediately and initially frowned upon by the Department of the Interior and Local Government (DILG) and DOH.

That same month, DOH recommended that wearing face masks remain enforced until the end of 2022.

The DOH likewise expressed the same concern over the EO issued in Cebu City. It expressed worry that other local governments would follow the example.

“That is one of our worries. We know that when these kinds of (policies) by some local governments continue, other (local government units) may follow suit, and that would be really disastrous for all of us,” Vergeire told reporters last September 2.

Vergeire added that the people must first build a “wall of immunity” before local governments implement or allow the optional wearing of face masks outdoors.

Days after, last September 5, Rama signed EO No. 6, which included supplementary provisions to his EO No. 5, introducing some changes to his previous policy.

Among the amendments included in the latest order stated that the voluntary use of face masks in the city’s open spaces will be under a “trial and observation period” from September 1 to December 31, 2022.

READ: Cebu City’s non-obligatory use of face mask: Trial only

The DOH also said that it was unaware of the local government’s “trial period” for implementing the non-obligatory use of face masks in Cebu City.

However, in just a few days, the DOH seemed to have changed its tune on the mandatory wearing of face mask when it welcomed the IATF’s recommendations and policy.

Among those who noticed the health department’s confusing stance on the COVID safety policy was health reform advocate and former special adviser to the National Task Force on COVID-19 Dr. Tony Leachon.

In a Twitter post last September 7, Leachon pointed that out and said: “Secretary OIC Vergeire was against the Cebu City lifting of face mask mandate outdoors but yielded to the IATF despite the 11.6% positivity rate, low booster rate…”

“Are there any health experts in the current IATF? Making the recommendation and saying it is not yet a policy will confuse the public amid projections of COVID cases increasing,” he added.

Adding to the confusion was the health department’s recent graphics or visual aids, which reminded the public the need for protection against COVID by wearing masks outdoors. 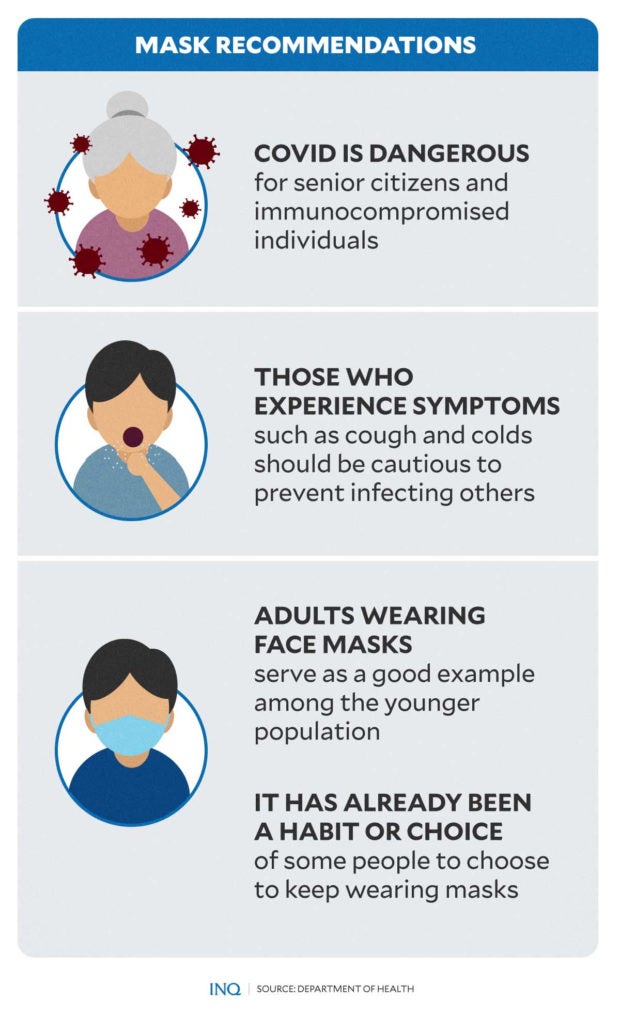 “Whether required or not, there will be people who will continue to wear face masks anywhere,” the visual aid said in Filipino. “There are many reasons why, including the DOH’s goal that is based on science and advice from health experts.”

Among the reasons cited by the DOH for continued wearing of face masks were:

Despite the explanation that the IATF recommendation—the mandatory wearing of face masks amid the COVID-19 pandemic—won’t be policy until an EO from the Office of the President was issued, experts said the graphics uploaded by the DOH might confuse some people.

“Surprisingly, the DOH based on their website has released infographics supporting the use of face masks. It’s quite counterintuitive,” Leachon told INQUIRER.net.

“IATF’s recommendation is to liberalize our mask-wearing mandate and make mask wearing outdoors voluntary across the country—and yet DOH released posters/reminders on the importance of masking,” he added.

“I think DOH doesn’t want blood in their hands.”

Last September 8, Vergeire announced that the DOH wanted to retain the mandatory wearing of face masks amid the COVID-19 pandemic.

“The position of the DOH is for us to continue on masking, but there were several data that were presented also that led to this decision,” Vergeire said when interviewed on ABS-CBN News Channel.

“So having said that, we needed to balance between the health and economy, and what we have compromised would be, this will be done among low-risk individuals and in low-risk settings,” she said.

“So meaning this will only be done outdoors, in settings where it is not crowded, in settings where there is good ventilation, and this will be done among low-risk individuals — meaning not the senior citizens, not those with comorbiditt, not the children, and definitely not those having symptoms with COVID-19,” added Vergeire.

However, Malacañang clarified that the optional mask rule outdoors is not yet final.

According to Angeles, the lifting of the mandatory mask mandate will be piloted by the last quarter of this year, “provided there’s an improvement in the COVID-19 booster vaccination coverage.”

In a recent interview, Vergeire said that the optional mask rule policy might be implemented “soon” or “maybe in a couple of days after the EO is released.”

“It’s going to happen,” she said, adding that Marcos had already instructed the drafting of the EO “asap (as soon as possible).”

However, infectious disease expert Dr. Rontgene Solante believes that it is not yet time to make optional the wearing of face masks.

He also explained that the mandatory use of face masks throughout the COVID-19 pandemic—even with the cases going down or trends going down—has helped reduce the number of infections in the country.

“We focused on protecting the population both indoor and outdoor and for me, it (wearing of face mask) will be the last policy that should be relaxed,” he said.

According to data from the DOH, the positivity rate from September 4 to 7 is 11.9 percent, far exceeding WHO’s moderate and low classifications. 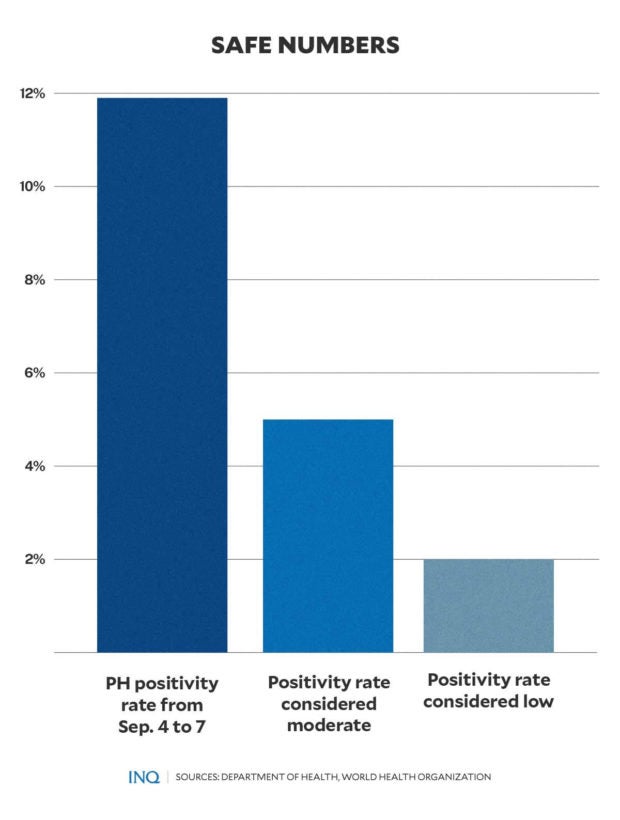 “It basically also gives the impression to a lot of Filipinos that there is really no need to vaccinate. You should not be afraid of COVID-19. So what will happen to our booster campaign?” Limpin said.

Due to low booster rate coverage, Vergeire announced that the DOH will not reach its target of inoculating 50 percent of the country’s population with COVID booster shots in the first 100 days of the Marcos administration—or by October 8.

“Right now, our booster doses is really at 23 percent, it is at 18 million. The numbers are really anemic. When we look at this, we really cannot reach the 50 percent during the first 100 days,” she said. 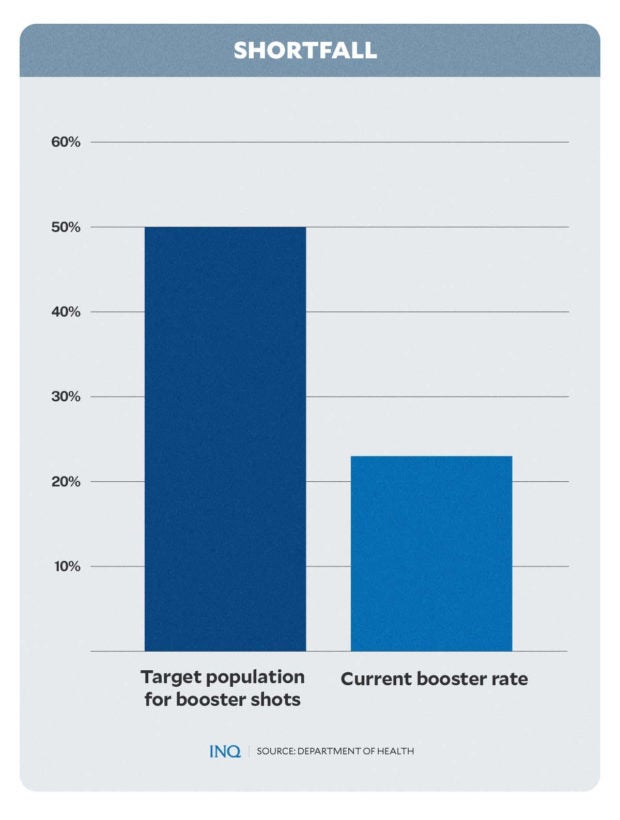 A total of 18,611,351 booster doses have also been administered across the country.

“The messaging is very confusing because the government itself does not know what it wants,” Leachon told INQUIRER.net.

“I’m sorry about this comment. The government has not been transparent with their communication process and when the time comes for real talk they have to make radical counterintuitive moves making the execution difficult,” he added.

Leachon urged government officials and the health department to admit that the mandate to make wearing of face masks optional is to help open up and boost the country’s economy. 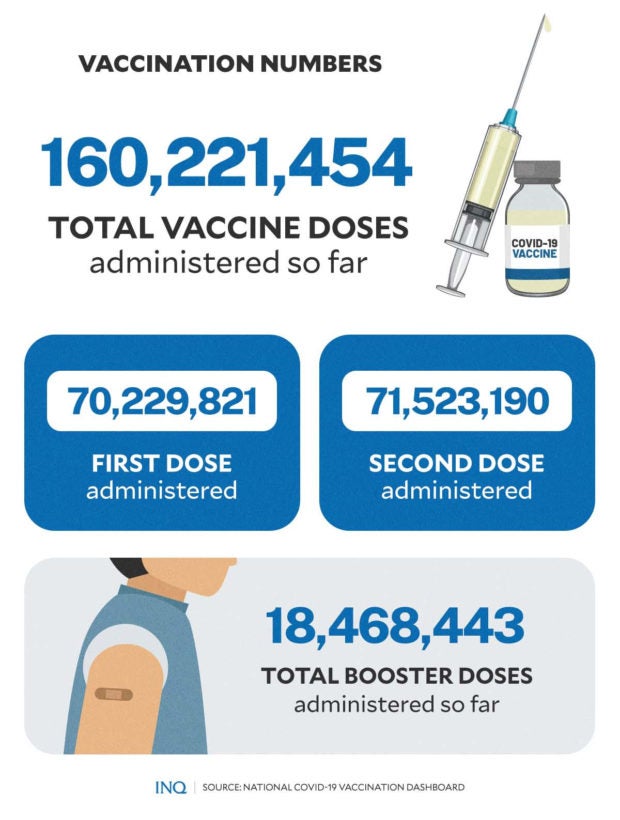 “All they need now is admit that we need to resort to measures to perk up the economy but at the same time, our leaders are requesting support to protect the people,” he said.

READ: Biz groups back optional use of face masks outdoors

Angeles had pointed to the improving tourism demand in countries that have already eased face mask rules.

“Because tourism is front and center in efforts to revive the economy, this matter is being taken seriously,” she said.

In a statement last Friday (September 9), Tourism Secretary Christina Frasco lauded the IATF recommendation, stating that the Philippines is at a “grave disadvantage” and has to embrace more lenient regulations like top Association of Southeast Asian Nations (Asean) countries.

At a House hearing of the committee on health last September 7, Vergeire said the government’s pandemic response was headed in the direction of “slowly shifting to a new normal,” or treating COVID-19 as “endemic.”

READ: Face mask to be optional when outdoors nationwide

With confusing messages thrown by officials on the recommended mandate on wearing of face masks, Leachon—citing German theoretical physicist Albert Einstein—said “If you can’t explain it to a six-year-old, you don’t understand it yourself. “

“This is perhaps the biggest communication lesson in the pandemic. We often talk about capturing the hearts and minds of people in our roles as communicators in public health, but we have continued to struggle in this aspect,” he added.

RELATED STORIES:
Quarantine flip flop unleashes pandemic of confusion, frustration
Unending mutation of the COVID virus brings a new creature: BA.2.75
The uncertainty of treating Omicron as sign of pandemic end game
Understanding ‘long COVID’ and how to prevent it