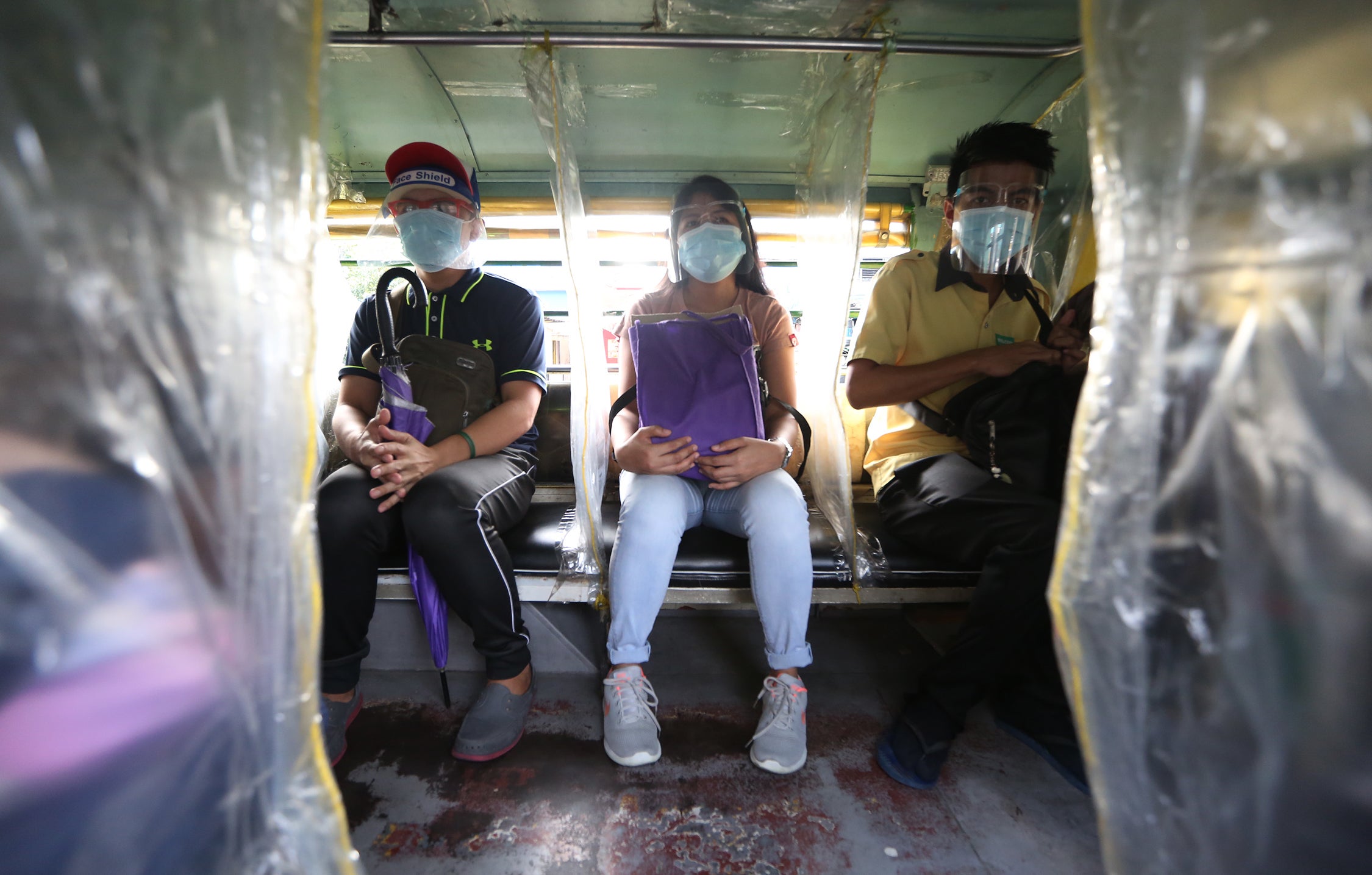 MANILA, Philippines—Two days ago, on Sept. 7, the government backpedaled and surprised the public by deciding to postpone the implementation of localized lockdowns as Metro Manila shifts to general community quarantine (GCQ).

Metro Manila was supposed to shift to GCQ starting Sept. 8 to 30, as the government imposes what officials termed as “granular” lockdown with a four-level alert system which will determine businesses and activities allowed certain areas.

Under the new lockdown system, local government units will only restrict the movement of residents in small areas—either a specific building, street, zone, village, and other places where there are high cases of COVID-19.

Instead, Metro Manila and other areas will remain on modified enhanced community quarantine (MECQ) status until Sept. 15

The decision, however, was met with criticism by small business owners and some government officials, too.

Was it wise to extend MECQ?

Amid rising COVID-19 cases in the country, paired with threats of the more transmissible Delta variant, some said Metro Manila is not yet ready for the lenient GCQ and a new lockdown system.

However, the flip-flop on quarantine status caused confusion and frustration among business owners and workers.

The last time Metro Manila was placed on MECQ, from April 12 to May 14, 2021, the country’s unemployment rate was 8.7 percent in April and 7.7 percent in May, according to Philippine Statistics Authority’s (PSA) labor force survey (LFS).

PSA explained that employment rate in April dropped to 91.3 percent from 92.9 percent in March when ECQ and MECQ were imposed in Metro Manila and nearby areas.

The unemployment rate in Metro Manila alone last April was 14.4 percent for individuals aged 15 years old and over who were active in the labor market.

Although unemployment rate eased in May, there were still 3.73 million Filipinos who were left jobless.

READ: More Filipinos employed in May but jobless number—3.73M—still high

According to PSA, these sectors suffered drastic cuts in employment in April 2021: 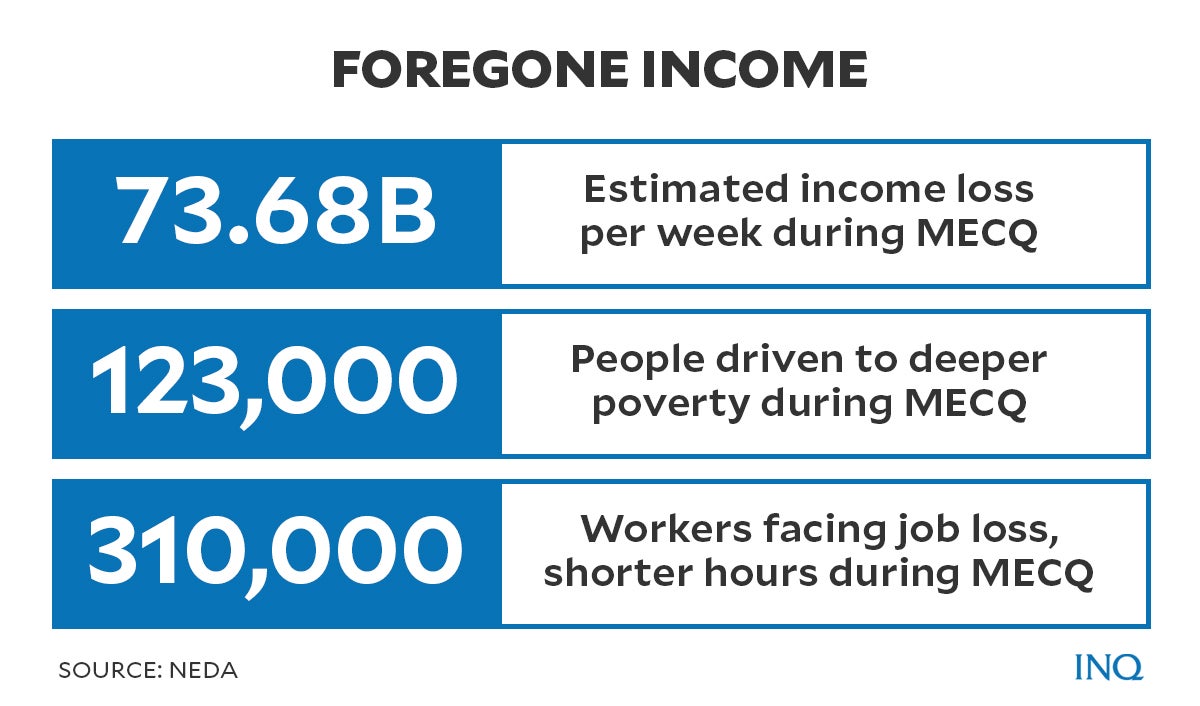 Meanwhile, in May, the following sectors had lower employment rates compared to those in April including: 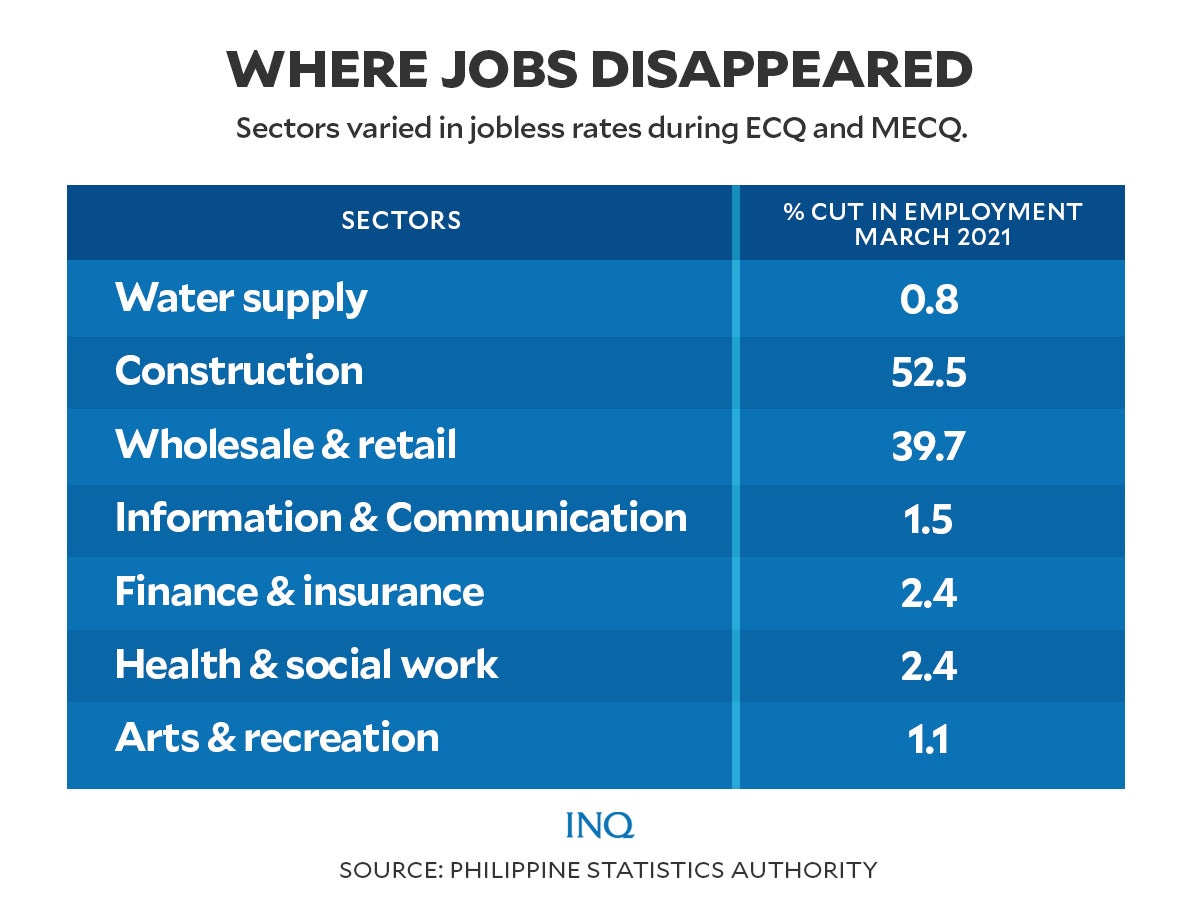 In 2020, the International Labour Organization (ILO) estimated that at least one-fourth of the Philippines’ total labor force, or at least 10.9 million workers, was likely to face displacement due to the pandemic.

This can take the form of income declines, reduced working hours or complete joblessness.

ILO’s report on COVID-19’s impact on the Philippine labor market said at least 7.8 million workers, the most in unemployment figures, were at risk of displacement due to the pandemic in these sectors: 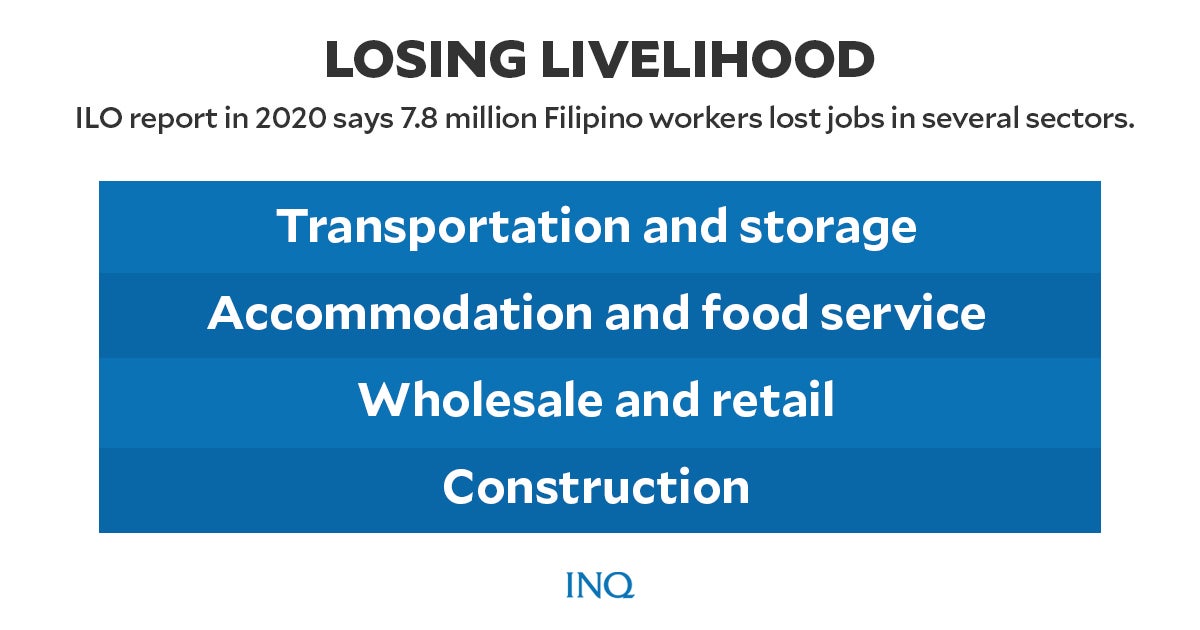 The first two sectors—including arts, entertainment, and recreation—had been tagged by ILO as high risk and were “least likely to remain operative” due to quarantine restrictions. These were also likely to suffer from sharp slumps in demand during the pandemic, ILO said. 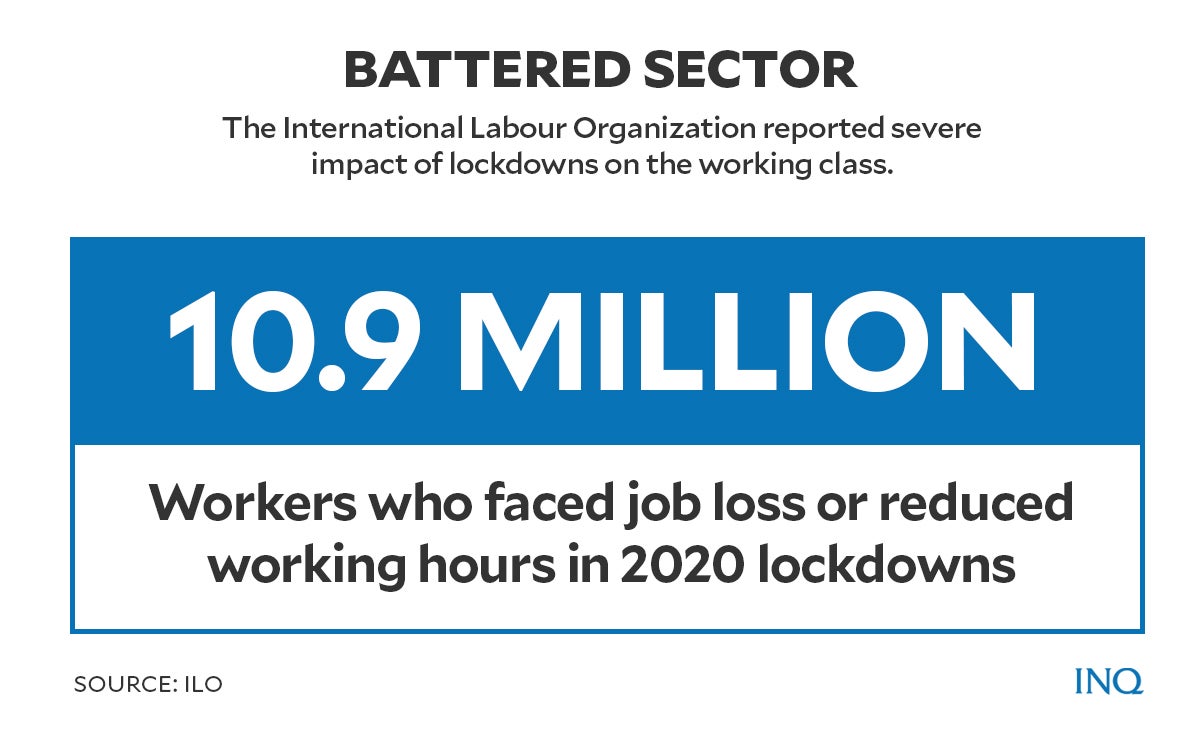 The organization also listed several sectors that were at medium risk of job displacements or suspension of operations:

ILO said these sectors may still recover after a transition period.

“In other words, our imposition of quarantine does not come without costs — there are severe economic costs, and that is why our position is to manage this risk so that we can open the economy at the appropriate time,” said Socioeconomic Planning Secretary Karl Kendrick Chua.

READ: Neda: It may take up to 2023 before PH economy returns to pre-pandemic output 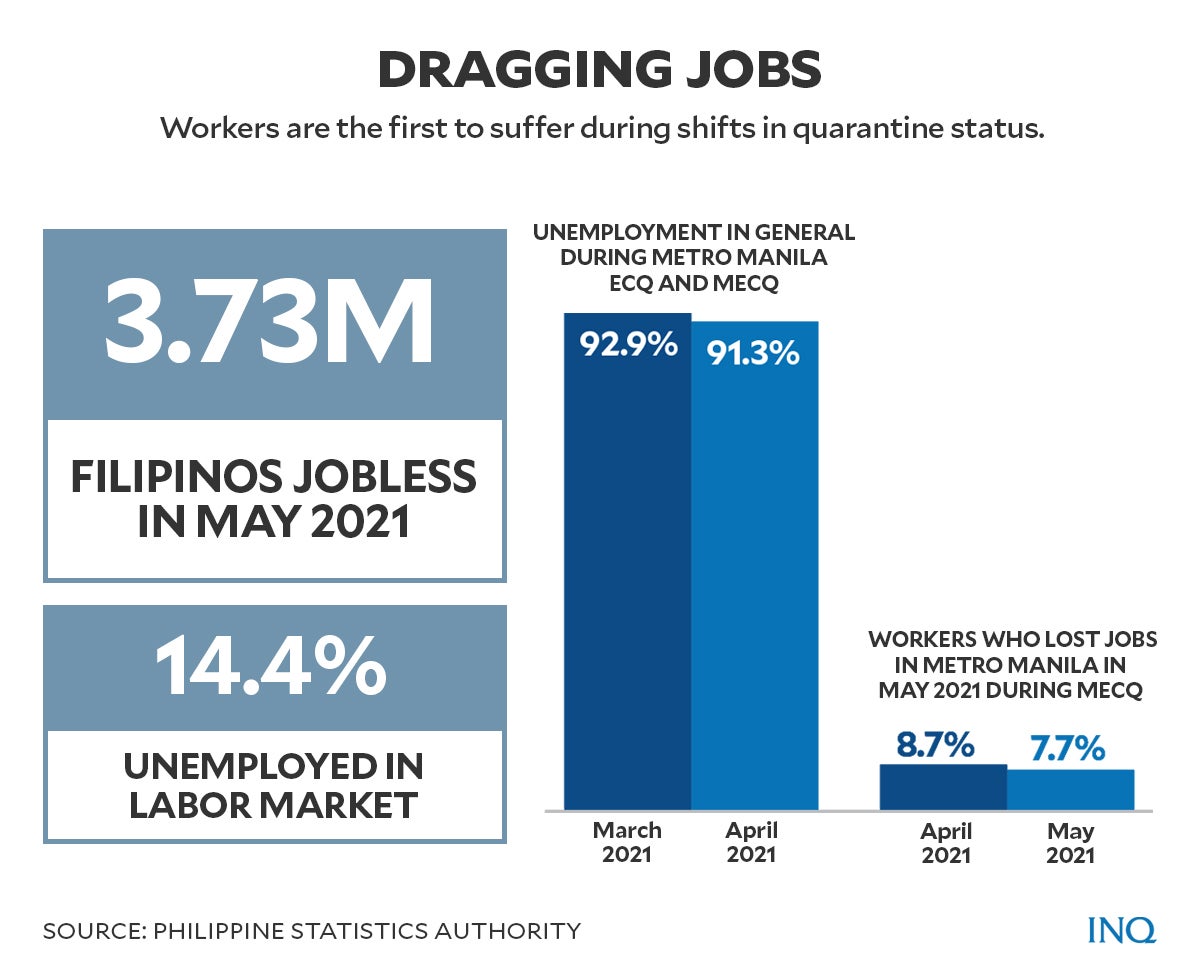 Based on guidelines issued by the Inter-Agency Task Force (IATF) for the management of emerging infectious diseases, the following businesses are prohibited to operate under MECQ: 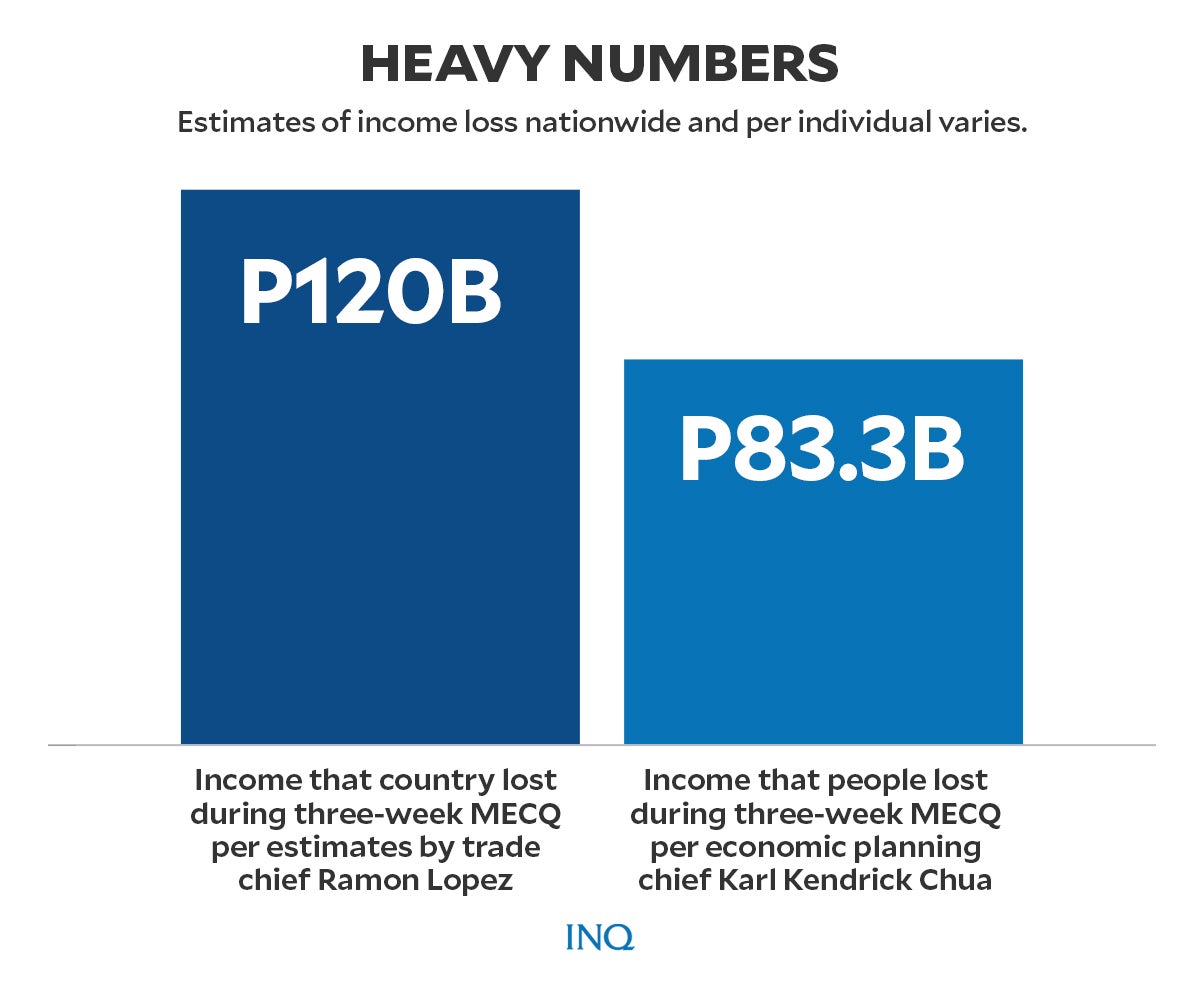 Other businesses and sectors are allowed to operate with 50 percent of workers on site and 50 percent working from home.

In a now-deleted viral Facebook post, business owner Inchang Mendoza shared her frustrations after the government suddenly announced the reimplementation of MECQ.

According to the post, her store staff already had general cleaning and bought kilos of meats to prepare for the expected shift to GCQ on September 8.

Smaller businesses in the country, according to studies, suffered heavier during the pandemic.

In a paper published last February, the Tokyo-based Asian Development Bank Institute (ADBI) said at least 75 percent of micro, small, and medium-scale (MSMEs) enterprises in the Philippines did not survive the first few weeks of the pandemic and were forced to close for good.

In a survey conducted from March to April 2020, ADB senior economist Shigehiro Shinozaki and statistician Lakshman N. Rao found that “education, construction, accommodation and food services (represented by tourism), and manufacturing were the hardest hit sectors in sales and revenue.”

“By region, MSMEs in the NCR were more likely to have no sales than those in the provinces,” the study said.

“However, MSMEs with declining revenue were more evident outside the NCR. Provincial MSMEs cut employees more than those in the NCR,” the study added. 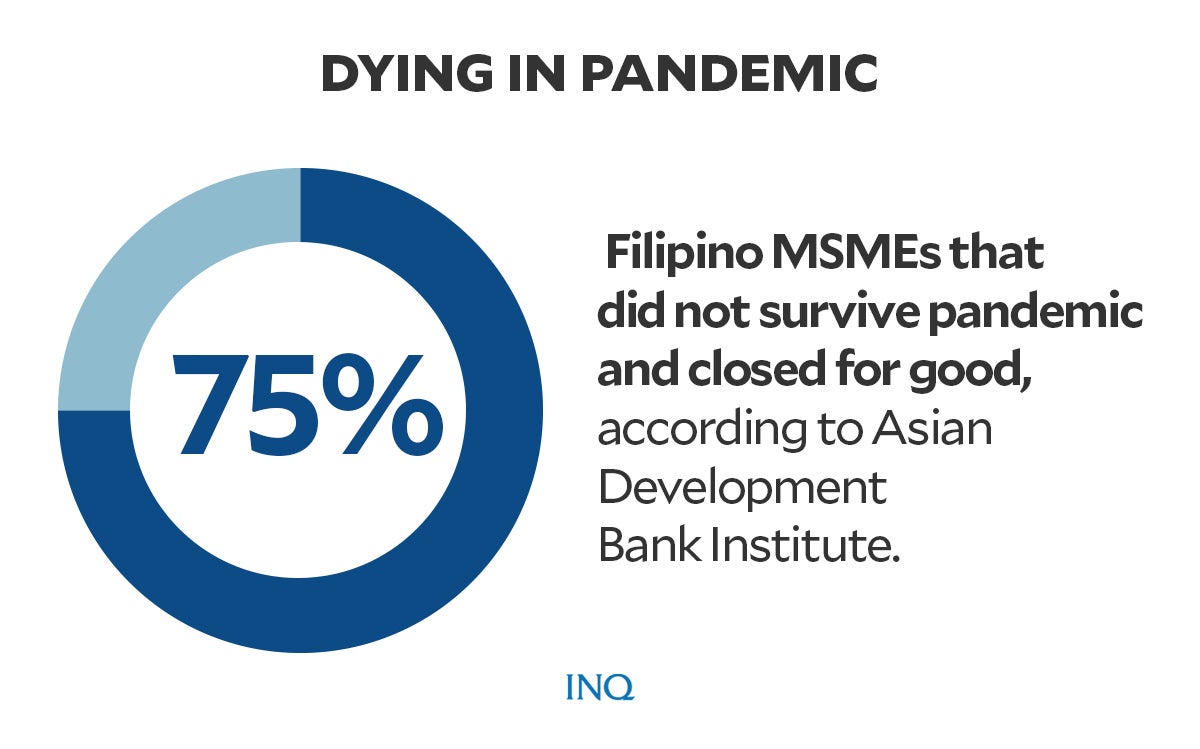 Shinozaki and Rao likewise noted that young firms, that are operating for only five years or less, were immediately hit by the lockdowns in 2020—causing zero sale and business closures.

Last month, the Department of Health (DOH) said more individuals in Metro Manila were able to receive jabs of vaccine against coronavirus despite the ECQ, which was supposed to prevent people from going out.

According to Health Undersecretary Myrna Cabotaje, the daily average of administered shots increased from 151,000 during the pre-ECQ period to 168,000 during the ECQ implementation.

The increase was attributed to the public’s growing acceptance of vaccines out of fear of the more contagious coronavirus variant, Delta, and local government efforts to scale up injections.

However, Dr. Rafael Castillo, dean emeritus and lead faculty for research of the Fame Leaders’ Academy, said the government is “sabotaging its own efforts to curb the current outbreak [of COVID-19 cases]” by imposing lockdowns amid the ongoing vaccine drive.

“[W]e’re conducting mass vaccinations in a not too well-organized manner, with hundreds and thousands congregating, making these vaccination centers superspreader venues,” said Castillo, who also writes a column for the Inquirer.

Vaccine czar Carlito Galvez Jr. on Sept. 9 said the government has administered a total of 37,176,513 doses of COVID vaccines.

Over 15 million Filipinos are also now fully vaccinated against COVID, he said.

Under MECQ, all residents are required to observe minimum public health standards at all times. This includes wearing a mask and face shield, physical distancing, frequent sanitation, and other health protocols.

The movement of people in MGCQ areas is limited to accessing essential goods and services, work in offices or industries, and other activities permitted to continue.

Persons below 15 years old, senior citizens or those over 65 years old, those with immunodeficiency, comorbidity, or other health risks, and pregnant women are required to stay home at all times.

“Local government units may relax the minimum age range down to fifteen (15) years old, depending on the COVID-19 situation in their respective jurisdictions,” IATF said.

Meanwhile, individual outdoor activities like outdoor walks, jogging, running, or biking are allowed only within the general area of residences or within the barangay, subdivision, or village — still observing health and safety protocols.

Any gatherings outside of residences shall be prohibited.

“Gatherings at residences with any person outside of one’s immediate household shall likewise be prohibited,” the implementing agency stated.

“However, gatherings that are essential for the provision of health services, government services, or humanitarian activities authorized by the appropriate government agency or instrumentality shall be allowed,” it added.

Aside from these guidelines, the national and local government — alongside the health department — are encouraging people to get vaccinated against coronavirus.

Amid the criticisms that following the government’s abrupt decision to retain MECQ instead of pushing through with the new lockdown system, NTF Against COVID-19 spokesperson Restituto Padilla, Jr. admitted that the government lacked preparation.

“Maybe next time, as a lesson learned by the government, the guidelines should be prepared before making announcements,” he said, speaking in Filipino.

Still, Padilla said the government’s last-minute decision could be seen in a “positive light.”

“It is possible [that there was a lack in preparation]. [Another reason] was the call of the health workers to delay [the implementation of new lockdown system],” he said.