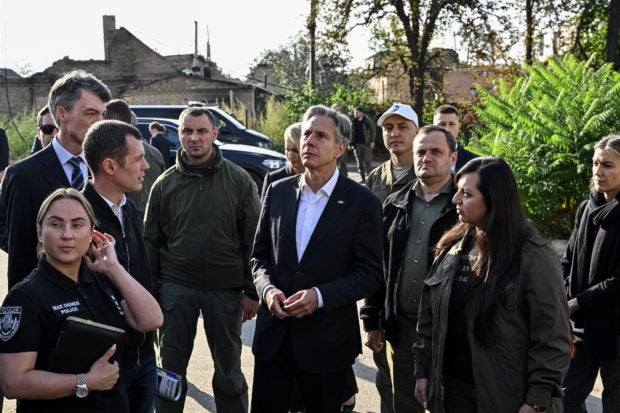 KYIV – Ukraine on Thursday hailed a lightning counteroffensive it said had recaptured swathes of its territory in the east and south, as U.S. Secretary of State Antony Blinken visited the country to pledge further aid.

Ukrainian President Volodymyr Zelensky said in a video address that Kyiv’s forces had “liberated dozens of settlements” and reclaimed 1,000 square kilometres (385 square miles) of territory in the east and south since Sept. 1.

Zelensky also posted a video in which Ukrainian soldiers claimed to have captured the eastern town of Balakliia near Kharkiv, the second largest city in Ukraine.

Video posted to a popular Ukrainian news aggregator appeared to show the Russians left trucks, artillery and ammunition boxes behind.

Vitaly Ganchev, a local pro-Russian official, told Russian state TV that Russian forces had fought off a Ukrainian attempt to encircle and capture Balakliia, which he said remained in Russian hands.

Reuters could not independently confirm the battlefield accounts.

Earlier, Ukrainian Brigadier General Oleksiy Gromov said troops had advanced up to 50 kilometres (30 miles) behind Russian lines and recaptured more than 20 villages in the Kharkiv region.

Blinken told reporters before leaving Kyiv: “We did get a comprehensive update on the counteroffensive and, again, it’s very early but we’re seeing clear and real progress on the ground, particularly around Kherson, but also some interesting developments in the Donbas in the east.”

Blinken pledged U.S. support for “as long as it takes”.

If the gains are confirmed and held, it would be a serious blow for Russia, which Western intelligence services say has suffered huge casualties. It would also represent a big boost for Ukraine, which is keen to show its Western backers that it can change the facts on the ground by force and deserves continued support.

This week’s surprise counteroffensive in the Kharkiv region saw Ukrainian forces make a sudden and deep thrust behind Russian lines.

Ukraine has for weeks been talking about a big counteroffensive in the south around Kherson. Western military analysts believe Russia may have left itself exposed in other areas as it rushed to reinforce the south.

Blinken announced $2.2 billion in new foreign military financing to Ukraine and 18 other countries at risk of future Russian aggression. Approximately $1 billion will go to Ukraine. The United States also announced a separate $675 million in weapons to the country.

The Kharkiv region borders Russia and its main city, Kharkiv, has for months been struck by Russian missiles after Moscow failed to take it in the early stages of its Feb. 24 invasion.

“We are scared … You can’t get used to it, never,” local resident Olena Rudenko told Reuters.

Kyiv is under pressure to demonstrate progress on the ground before winter sets in, amid threats by Russian President Vladimir Putin to halt all energy shipments to Europe if Brussels goes ahead with a proposal to cap the price of Russian gas.

Russia has confirmed fighting in the Kharkiv region area but has not confirmed any territorial losses, though unverified social media accounts run by Russian military experts have suggested Moscow did suffer setbacks and would need to urgently reinforce.

Heavy fighting was also reported on Thursday in areas near the Russian-held Zaporizhzhia nuclear power station in southern Ukraine after Kyiv warned it might have to shut down the plant to avoid disaster.

Putin said on Wednesday that Russia would not lose what he calls its “special military operation” in Ukraine, an exercise he has described as an attempt to preemptively protect his country’s security against an expanding NATO.

Asked about the war’s progress, Putin said: “We have not lost anything and will not lose anything.”