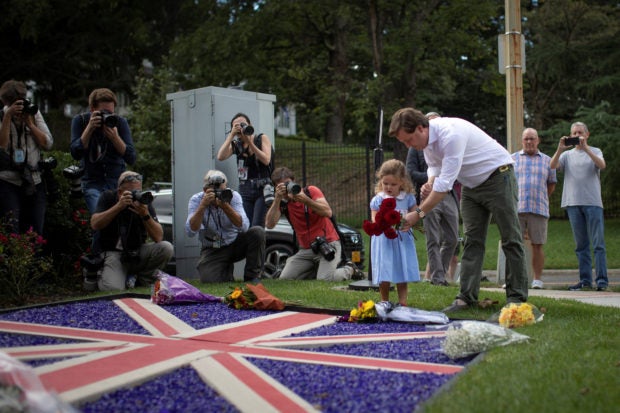 Edward Rodgers helps his daughter, India, lay flowers following the announcement of the death of Queen Elizabeth, at the British Embassy in Washington, U.S., September 8, 2022. (REUTERS)

LONDON  – As world leaders paid tribute to Queen Elizabeth on her death aged 96 on Thursday, ordinary people in Britain and around the globe paid their own respects to a woman who had been the face of her nation for more than 70 years.

On a rainy London night, thousands gathered outside Buckingham Palace, in central London, some laying floral tributes outside the black iron gates. There were similar scenes outside the queen’s Windsor Castle home.

Portraits of Elizabeth were posted on billboard screens in central London’s Piccadilly Circus and the city’s Canary Wharf financial district, and also across the Atlantic in New York’s Times Square. Flowers were laid outside the British Consulate General in New York.

In Washington, the U.S. flag was lowered to half staff to mark the passing of a monarch whose legacy President Biden said “will loom large in the pages of British history, and in the story of our world”.

Her death was also marked in European cities.

In Berlin, flowers and candles were laid outside the British Embassy, while in Venice “God Save the Queen”, the British national anthem, was played outside the Italian city’s Festival Buildings.

Read Next
Ukraine claims to have taken back dozens of communities as Blinken visits
EDITORS' PICK
Smart, TNT launch more powerful and value-packed Double GIGA+ 50 offer
Pagasa: No tropical cyclone expected in the next few days
House energy committee chair Arroyo bats for cheap electricity
NDRRMC confers posthumous award on 5 fallen Bulacan rescuers
Having confidential funds not a DepEd norm – Pimentel
Motorcycles, smartphones, and cash prizes up for grabs in TNT’s ‘Tuloy Ang Saya’ Raffle in Mindanao
MOST READ
Sharon Cuneta ‘turned away’ at Hermes boutique in Seoul, welcomed by LV
Marcos in Singapore for F1 Grand Prix – source
Having confidential funds not a DepEd norm – Pimentel
WATCH: Coleen Garcia dances with Billy Crawford in France’s ‘Dancing with the Stars’
Don't miss out on the latest news and information.