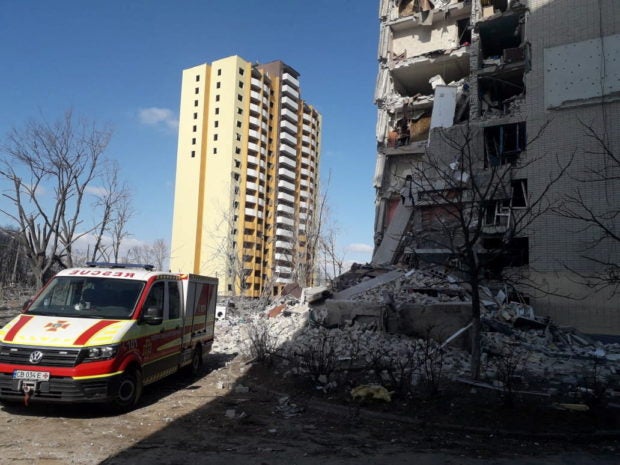 A residential building damaged by shelling is seen, as Russia’s attack on Ukraine continues, in Chernihiv, Ukraine, in this handout picture released March 17, 2022. Press service of the State Emergency Service of Ukraine/Handout via REUTERS

WASHINGTON — U.S. Secretary of State Antony Blinken on Thursday said a U.S. citizen was killed in Ukraine amid the ongoing Russian invasion.

“I can confirm that an American citizen was killed. I don’t have any more details for you than that,” Blinken told reporters in a press briefing.

Blinken’s confirmation came after police in the Ukrainian city of Chernihiv said earlier on Thursday that an American was among those killed by Russian shelling.

Viacheslav Chaus, governor of the region centered on the front-line city of Chernihiv, said 53 civilians had been killed there in the past 24 hours. The toll could not be independently verified. Russia denies targeting civilians.

Russia has assaulted Ukraine from four directions, sending two columns toward Kyiv from the northwest and northeast, pushing in from the east near the second biggest city Kharkiv, and spreading in the south from Crimea.