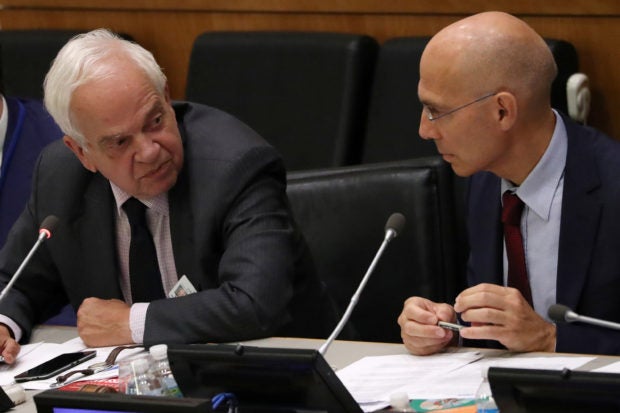 FILE PHOTO: Canadian Minister of Immigration John McCallum speaks with Assistant High Commissioner for Protection Volker Turk (right) at an event on “Mobilizing a ‘Whole of Society’ Approach to Refugees” during the 71st Session of the United Nations General Assembly in the Manhattan, New York, U.S., September 20, 2016. REUTERS/Andrew Kelly/File Photo

GENEVA — The United Nations General Assembly on Thursday approved the appointment of Austria’s Volker Turk as the next U.N. High Commissioner for Human Rights.

Turk’s most immediate challenge will be grappling with the follow-up to a report on China’s Xinjiang region published by his predecessor minutes before her departure.

The report found that China’s “arbitrary and discriminatory detention” of Uyghurs and other Muslims in its Xinjiang region may constitute crimes against humanity.

“It is China’s hope that Mr Turk will lead the office in strictly abiding by the principles of objectivity, impartiality … and non-politicization,” China’s Deputy U.N. Ambassador Dai Bing told the General Assembly.

Deputy U.S. Ambassador to the United Nations Lisa Carty said Turk “must serve as an independent, impartial, and unwavering voice for human rights issues around the world.”

“The high commissioner must be willing to call out human rights violations and abuses wherever they occur,” she said.

The high commissioner plays a critical role in speaking out against the backsliding of freedoms at a time when autocracies are gaining influence at the expense of democracy.

Other candidates for the job included career diplomat Federico Villegas from Argentina, and Senegal’s Adama Dieng, who previously advised Guterres on genocide prevention.

“The Secretary-General missed a key opportunity to build the legitimacy and authority of the next High Commissioner,” Lynch said.