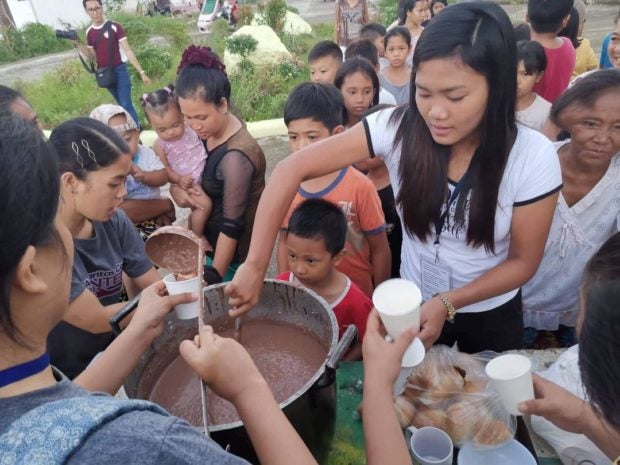 FILE PHOTO: Children line up for Mingo meals in Panitan, Capiz, that was recently hit by the floods. CONTRIBUTED PHOTO

ILOILO CITY — A nutrition program under former vice president Leni Robredo’s Angat Buhay organization is aiming to feed more than 200 children, and improve their learning capacities in an Iloilo town.

On Saturday, the Angat Bukas Convergence Program for Nutrition and Education announced it wants to feed Mingo meals (instant meals made from rice, mung beans, and moringa) to 230-260 children from all 60 barangays of Janiuay town.

They will be monitored by the Janiuay local government for six months before, during, and after the feeding program.

Produce from local farmers in the province will also be used for in-school feeding programs for Kindergarten to Grade 3 learners with parent groups and local volunteers to serve as cooks.

READ: Group fights malnutrition one ‘mingo’ meal at a time

This project was previously implemented by the Office of the Vice President (OVP) under Robredo in the neighboring town of Lambunao together with the Negrense Volunteers for Change (NVC) Foundation, which partners again with the now-private Angat Buhay.

Genuino added that they would also seek to start a CLH in Janiuay town, and all CLHs will now be refocused on literacy and numeracy tutorials as learners begin to return to in-person learning.

“Angat Buhay has four pillars—education, nutrition and health, community engagement, and disaster relief and rehabilitation. Our focus in Iloilo province is [on] education and nutrition and health. We’ve created Community Learning Hubs where learners have access to Wi-Fi and tutorials on how to use computers,” said Genuino.

“We have done this in the pandemic to help print modules, conduct research, and now our focus is to convert them into tutorial centers because they are starting to go back to school. So, what they need is support, especially in literacy and numeracy,” she added.

Congressman Defensor said he is looking to replicate the program with the non-government organizations in the neighboring towns of Maasin and Badiangan.

He also mentioned that Angat Buhay and its private partners have committed to building new classrooms in January.