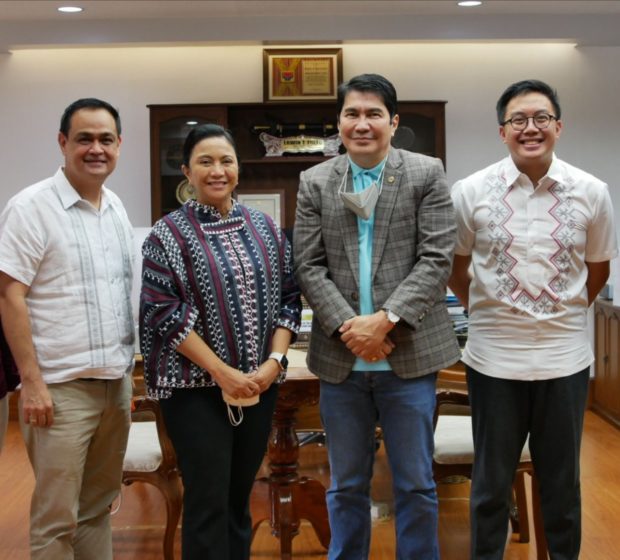 Former vice president Leni Robredo and officials of her Angat Buhay non-government organization are meeting with Social Welfare and Development Secretary Erwin Tulfo to discuss the group’s possible contributions, including the timely delivery of information in calamity-stricken areas. (Photo from DSWD)

MANILA, Philippines — Officials of the Angat Buhay non-government organization (NGO), including former vice president Leni Robredo herself, met with Department of Social Welfare and Development (DSWD) Secretary Erwin Tulfo to discuss how their group can help the government.

In a post on her official Facebook page, Robredo shared pictures uploaded by Tulfo, which showed the former vice president and then the current DSWD secretary discussing several things.

Tulfo’s post said that Robredo’s organization vowed to help the government through the speedy transmission of information on areas hit by calamities.

“We met with DSWD Secretary Erwin Tulfo today to present the programs of Angat Buhay and to explore possible areas of collaboration. We look forward to working with the Department of Social Welfare and Development in uplifting the lives of our fellow Filipinos,” Robredo said.

(Mrs. Robredo presented that their volunteers would continue helping in the provinces by providing quick information to the DSWD about areas hit by calamities so that the appropriate aid would be delivered immediately.)

The DSWD released another statement and a set of photos about the meeting.

(Atty. Robredo and Angat Buhay Executive Director Raffy Magno presented to Secretary Tulfo the programs and assistance that they can possibly provide through Angat Buhay.)

(Secretary Tulfo thanked Angat Buhay for its offer, especially their promise to give quick information to DSWD about provinces and areas where calamities would hit so the agency would make that provision of assistance.)

After stepping down as vice president at the end of her term last June 30, Robredo vowed to focus on fighting disinformation while transforming the support base she got in the previous presidential elections into a non-government organization.

During the 2022 national elections, Robredo ran against eventual winner President Ferdinand Marcos Jr.  Although she lost, Robredo developed a huge support base which became the grounds for establishing the Angat Buhay NGO.

Since its inception and registration with the Securities and Exchange Commission, Robredo’s Angat Buhay has engaged in several projects — from response to the Northwestern Luzon earthquake that hit several provinces in the Cordillera Administrative Region, Ilocos Region, and Cagayan Valley.

Last August 14, Robredo and the NGO turned over several housing units in Albay to several beneficiaries in Guinobatan town.