MANILA, Philippines — The Securities and Exchange Commission (SEC) has approved the registration as a business entity of Angat Buhay Foundation, an organization formed by former Vice President Leni Robredo and launched on Friday.

At the launch of the nongovernment organization (NGO), Robredo said that the corporate name of the program is Angat Pinas Inc., because there is already a registered Angat Buhay entity.

She, however, said that the program’s name will still be “Angat Buhay.”

(When we were registering the foundation, it was not approved at first because there is already an entity named Angat Buhay that had been registered long ago.)

(The approved corporate name is Angat Pinas Inc., but the program will still be called Angat Buhay.)

Robredo said the approval came in time for the launching of the foundation.

(This just came at the right time because our corporate existence has just been approved, so we can start our foundation already.)

An NGO must be registered with the SEC as a business entity to be legal.

Among the key advocacy programs of the foundation are education, health, food security and nutrition, and disaster risk response.

For the education side, Robredo said that existing community learning hubs established when she was still Vice President during the pandemic will be converted into remedial centers.

These centers will focus on teaching reading and math, she said. 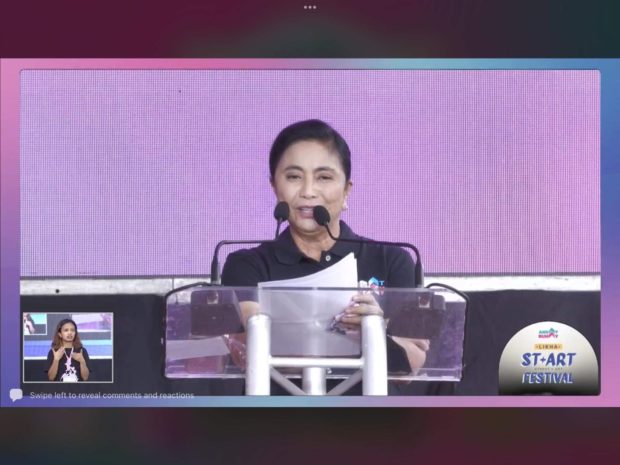 Former Vice President Leni Robredo during the launch of her Angat Buhay program, of which she will sit as chairperson. Screengrab from livestream

The foundation was launched in a two-day street and art festival in Quezon City, and was meant to continue her “Angat Buhay” program, which she initiated as vice president in the past six years.

To fund the foundation, Robredo said visitors might get some of the artworks and memorabilia gifted to her by her supporters during her 2022 presidential run in exchange for any donation.

The foundation was conceived after her unsuccessful presidential bid in the May 9 elections, aiming to transform her “largest volunteer network” into a nongovernment organization.

Robredo said she and her former chief-of-staff, Boyet Dy, will serve as chairperson and board member of Angat Pinas Inc., respectively.