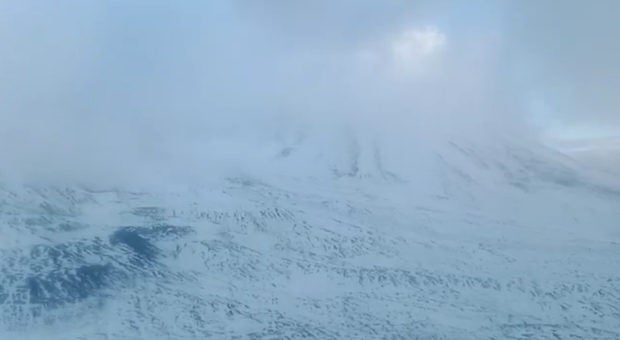 A view from a rescue helicopter shows the Klyuchevskaya Sopka volcano following an accident involving a tourist group of climbers on the far eastern Kamchatka Peninsula, Russia, September 4, 2022, in this still image taken from video. Press service of Kamchatka search and rescue team/Handout via REUTERS TV

Earlier local authorities said six people had been killed and six more were believed to be stranded from the party of 12, which included two guides.

The party of 12 set off to climb the 4,754-meter (15,597-foot) volcano on Tuesday but ran into trouble on Saturday when some of the group fell to their death at almost 4,200 meters, authorities said.

One person is thought to have a broken leg, they added.

Rescuers attempted to reach them on Sunday but had to turn back as severe winds prevented their helicopter from landing.

“They were scheduled to land at an altitude of 3,300 meters, but due to gale force winds at 30 metres per second (67 miles per hour), they failed to do so, although two attempts were made a few hours apart,” rescuers said.

Temperatures on the mountain can reach as low as minus 14 Celsius (7 Fahrenheit) overnight.

Tatyana Yukhmanova, a representative from the local civil defence authority, said that rescuers will try to reach the group again tomorrow if weather conditions allow.

Klyuchevskaya Sopka is the tallest of over 160 volcanoes whose snowy peaks tower over Russia’s Kamchatka Peninsula.

It forms part of a UNESCO World Heritage Site listed for its exceptional natural beauty.

Rescuers warn that the mountain, made up mounds of volcanic rocks mixed with snow and ice, is considered particularly hazardous to climbers due to its altitude and the risk of volcanic eruption.