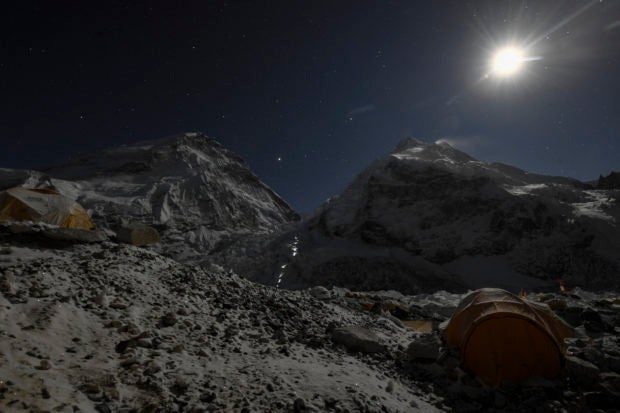 In this photograph taken on May 4, 2021 mountaineers make their way along the Khumbu icefall of Mount Everest aided by headlights in the early morning, as seen from the Everest base camp, in the Mount Everest region of Solukhumbu district, some 140 km northeast of Nepal’s capital Kathmandu. (Photo by PRAKASH MATHEMA / AFP)

Ngimi Tenji Sherpa, 38, was found dead early Thursday on a trail close to an area known as the “football field,” a relatively safe region of the treacherous Khumbu Icefall.

“His body has been brought down. There were no accidents, and initial medical check suggests high-altitude sickness,” said Pasang Tsering Sherpa of Beyul Adventures, the local partner of US-based expedition company International Mountain Guides.

Sherpa was carrying equipment uphill to Camp 2 and was found in a sitting position, still wearing his backpack.

“The events today have been a big shock to everyone. Our thoughts and prayers are with Ngima’s family,” IMG’s expedition leader Greg Vernovage posted on the company’s website.

About a third of deaths on Everest are Nepali guides and porters, underscoring the risk they take for the dreams of hundreds of paying climbers aiming to reach the top of the world’s highest peak.

Most climbers attempting to summit the 8,848-metre (29,028-foot) mountain do so with the help of at least one guide.

For each expedition, many more make several dangerous trips to ferry tents, food, and oxygen bottles to high-altitude camps.

Thursday’s incident follows the death of a Greek climber on the 8,167-meter (26,795-foot) Dhaulagiri on Tuesday.

Antonios Sykaris, 59, fell ill while descending from the summit of the world’s seventh-highest mountain and died at an altitude of 7,400 meters.

Nepal, home to eight of the world’s highest peaks, sees hundreds of adventurers during the spring climbing season, when temperatures are warm and winds are typically calm.

The country only reopened its peaks to mountaineers last year after the pandemic shut down the industry in 2020.

But with coronavirus cases receding, expedition operators in Nepal are hopeful of a busier climbing season this year.

Nepal’s government has already issued permits to 689 mountaineers for the season, including 250 for Everest.