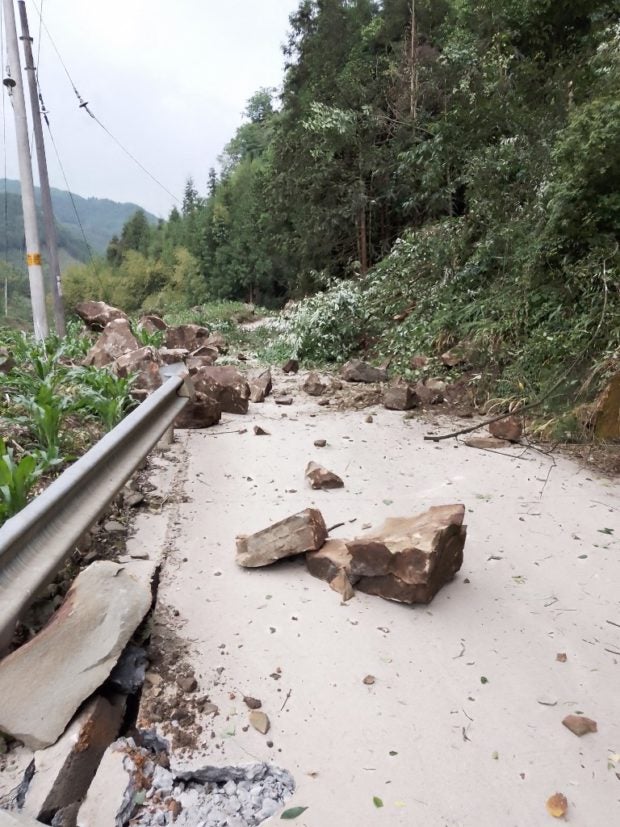 FILE PHOTO: Rocks block a road after a 6.1-magnitude earthquake which killed four people and injured 14 others in Yaan, in China’s southwestern Sichuan province on June 2, 2022. (Photo by AFP) / China OUT

Beijing, China — A 6.6-magnitude earthquake struck southwestern China on Monday, according to the US Geological Survey, shaking buildings in the megacity of Chengdu where a Covid-19 lockdown has confined millions of residents to their homes.

The quake hit around 43 kilometers (26 miles) southeast of the city of Kangding in Sichuan province at a depth of 10 kilometers, the USGS said.

There were no immediate reports of any casualties.

Tremors were felt in the nearby provincial capital Chengdu and the megacity of Chongqing, residents told AFP.

“I felt it quite strongly,” a Chengdu resident surnamed Chen said. “Some of my neighbors on the ground floor said they felt it very clearly.”

A resident of Chongqing said the quake was “pretty noticeable” and shook the lights and furniture in his fifth-floor apartment.

“I was pretty scared,” he told AFP, “but it didn’t seem to faze people here.”

More than 500 rescue personnel have been dispatched to the epicenter, state broadcaster CGTN reported, adding that “several aftershocks have been recorded in nearby areas”.

A smaller Magnitude 4.6 tremor hit eastern Tibet less than an hour after the initial quake, according to the USGS.

Earthquakes are fairly common in China, especially in the country’s seismically active southwest.

At least four people were killed and dozens more injured after two earthquakes in southwestern China in June.

On that occasion, a shallow 6.1-magnitude quake hit a sparsely populated area about 100 kilometers west of Chengdu, which has a population of 21 million.

It was followed three minutes later by a second quake of magnitude 4.5 in a nearby county where the deaths and injuries occurred.

Chengdu extended its virus lockdown on Sunday as it fought a Covid flare-up with hundreds of cases.

The region has also suffered a summer of extreme weather, with a record-breaking heat wave noticeably drying rivers in Chongqing.