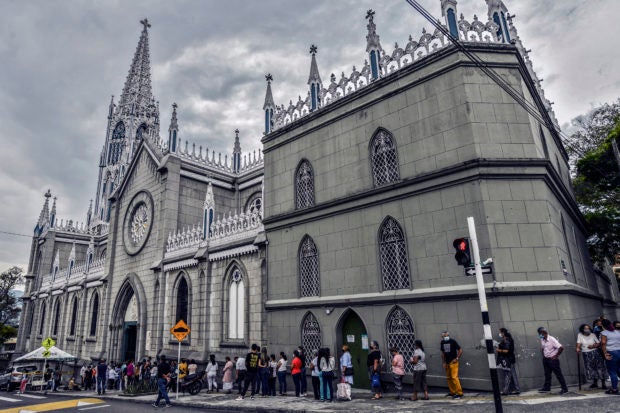 Catholic faithful wait in line to enter the Manrique Church to attend the traditional Holy Thursday mass in Medellin, Colombia, on April 1, 2021, amid the COVID-19 pandemic. AFP

BOGOTA — The Catholic Church in Colombia has released the names of 26 priests who were investigated for alleged sexual abuse of minors there, local media reported Saturday.

The Archidiocese of Medellin revealed the list of those accused between 1995 and 2019 in response to a court ruling in favor of Juan Pablo Barrientos, a journalist investigating an alleged network of pedophile clergy.

“Most of these priests … were suspended for a little while, and went back to being priests again,” said Barrientos, who has been investigating sexual assaults by priests for years, in a video released Saturday.

Barrientos managed to get judges to accept his request and force the Archdiocese of Medellin to make the list public.

The prosecution, which has not commented on the investigations, received 14 of the complaints on Thursday, though the abuses were committed years ago, according to the document published by the Church.

Monsignor Ricardo Tobon, Archbishop of Medellin, said that the institution wants to “show transparency, commitment to the truth and that there is no purpose of cover-up.”

In a video posted on the Archdiocese’s Twitter account, the religious figure accused Barrientos of “an aggressive smear campaign against the Church.”

According to the journalist, the Church divulged the names “because the Constitutional Court has forced it to do so.”

In 2019, Barrientos published the book “Let the children come to me,” an investigation into pederasty and cover-up within the clergy in the South American country, where most people are Roman Catholic.

The Church tried to stop publication of the book with legal actions that failed.

At least six priests have served prison sentences for child rape in the country.