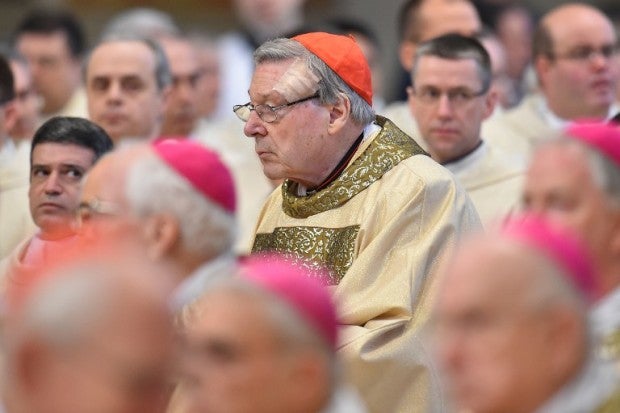 PARIS — The Catholic Church has been repeatedly rocked by child sex abuse scandals over the last three decades.

It is the latest in a series of landmark reports and investigations that have helped lift the “veil of silence” around the crimes.

After a series of scandals, Australia’s government set up a Royal Commission, a top-level inquiry into institutional child sex abuse.

The commission said in February 2017 that most of the abuse took place in churches, with seven percent of Catholic priests accused of abusing children in Australia between 1950 and 2010. It said allegations were almost never investigated.

It found that 4,444 alleged incidents of child sex abuse had been reported to Church authorities. In some dioceses, more than 15 percent of priests were perpetrators.

The commission also heard testimony from the Vatican’s former finance chief Cardinal George Pell, who was found guilty in 2018 of sexually abusing choirboys in Melbourne in the 1990s.

Pell — who had been Pope Francis’ anti-corruption tsar — was released from prison in 2020 after a court quashed his conviction.

In June, Pope Francis rejected an offer by top German bishop Reinhard Marx to resign over the Church’s “institutional and systemic failure” in handling child sex abuse in the western city of Cologne.

It found that 1,670 clergymen had committed some type of sexual attack against 3,677 minors, mostly boys under 13, between 1946 and 2014, while saying this was almost certainly an underestimate.

Most perpetrators have not been punished and the Church grants compensation on a case by case basis, without transparency.

In 2002, the Boston Globe revealed the massive scale of sex abuse on children in the Boston diocese and efforts by the Catholic hierarchy to cover it up. The paper’s investigation was the subject of the Oscar-winning film “Spotlight”.

In 2004, a Church commission published a report requiring clergy to report suspicions of sexual assault.

According to lawyers, more than 11,000 complaints have been lodged in the US by victims of priests.  Dioceses have paid out hundreds of millions of dollars in out of court settlements.

Victims associations say that these payouts allow the church to escape justice.

A grand jury investigation into Pennsylvania dioceses in 2018 exposed the systematic cover-up by the Church of abuse by “over 300 predator priests”. More than 1,000 child victims were cited.

In 2019, Pope Francis defrocked former American cardinal Theodore McCarrick in a first for the Church.

Several dioceses have since opened their archives, revealing that hundreds of priests had been suspected of abusing minors.

Accusations of large scale sex crimes in Ireland’s Catholic institutions go back decades, with the number of underage victims estimated at nearly 15,000 between 1970 and 1990 alone. Several bishops and priests accused of covering up abuse have been punished.

The official Ryan Commission report in 2009 found widespread abuse of children in Catholic-run institutions between the 1930s and the 1970s.

It said Church-run orphanages and industrial schools were places of fear, neglect and endemic sexual abuse.

The 2009 Murphy report into the Dublin archdiocese said that between 1975 and 2004 the Church had “obsessively” concealed abuse. And after another highly critical report in 2011, into the Cloyne diocese the Vatican recalled its ambassador after the then Irish premier accused it of obstructing investigations into sex abuse by priests.