In Cordillera, fewer poor families in first half of 2021 | Inquirer News

In Cordillera, fewer poor families in first half of 2021 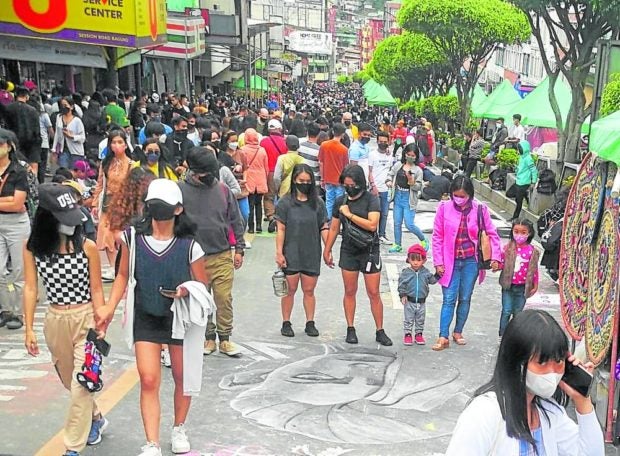 FOOT TRAFFIC Crowds in Baguio’s business district during weekends reflect the improved economic growth in the city and the rest of the Cordillera since the pandemic first shuttered business activities in 2020. —EV ESPIRITU

BAGUIO CITY — The number of poor families in the Cordillera region dropped in the first six months of 2021, according to the latest report of the Philippine Statistics Authority (PSA).

The poverty statistics report showed a slide from a poverty incidence of 13.8 percent of the Cordillera population in the first half of 2018 to 12.1 percent during the same period last year, said PSA statistical analyst Aldrin Federico Bahit Jr. during a press briefing here on Monday.

The reduction is equivalent to “the graduation of approximately 7,500 Cordillera families from poverty” at least from January to June 2021, after a three-year period, he said.

PSA measured the magnitude of poor Cordillera households and saw the number dwindle from 61,500 poor families from January to June 2018 to 54,000 during the same period in 2021.

The threshold represents the lowest yet adequate income earned by an individual, so “if your take-home pay is much lower than P14,023 in the region, you are poor,” Bahit said.

In 2018, Mountain Province had the highest poverty threshold of P13,366 because of a high cost of living, while the lowest threshold was measured in Apayao province at P11,523, Bahit said.

The region’s first semester food threshold, or “the minimum amount of money required to purchase basic food needs,” was P9,796 which was up from P8,622 in 2018.

This meant that the magnitude of subsistence poor was reduced from 26,900 to 21,400, “which is still high because we don’t want anyone to be hungry,” Bahit said.

“While the region’s poverty incidence has become low, our food subsistence incidence shot up from 5.4 percent of the population in 2018 to 6.3 percent last year,” he said.

The PSA saw poverty incidence among families reduced in most Cordillera provinces, particularly in Abra and Apayao, where more poor families managed to “move away from poverty,” Bahit added. —VINCENT CABREZA

July inflation heats up further to 6.4%