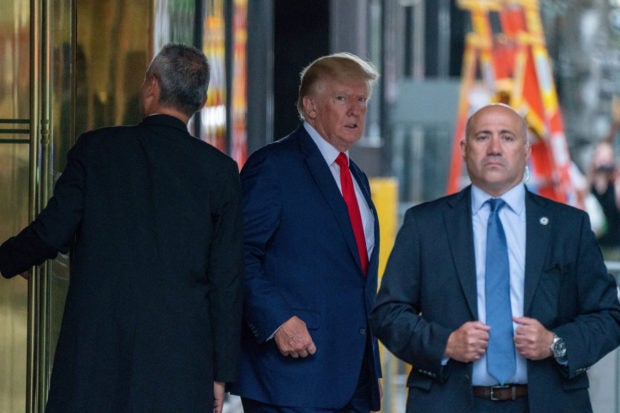 WASHINGTON — The U.S. Justice Department asked a judge on Thursday to make public the warrant that authorized an FBI search of Donald Trump’s Florida home, after the former president attacked the search as an act of political retribution.

Attorney General Merrick Garland confirmed for the first time that agents had searched Trump’s Mar-a-Lago resort in Palm Beach. The search is part of an investigation into whether he illegally removed records from the White House as he was leaving office.

Garland, the nation’s top law enforcement official, said he had personally approved the decision to order the search.

His confirmation was highly unusual since U.S. law enforcement typically does not discuss ongoing investigations. But it came after Trump himself announced the search on Monday night, alleging that it was an act of political retribution by Democratic President Joe Biden.

Garland said the Justice Department had asked a court to publish a sealed search warrant “in light of the former president’s public confirmation of the search, the surrounding circumstances and the substantial public interest in this matter.”

It was not clear whether Trump’s legal team would object to the release of the warrant, which could shed light on the nature of the investigation.

In a statement on his Truth social network, Trump said: “My attorneys and representatives were cooperating fully, and very good relationships had been established. The government could have had whatever they wanted, if we had it.”

The unprecedented search marked a significant escalation in one of the many federal and state probes Trump is facing from his time in office and in private business.

FBI agents visited Trump’s property earlier this year to investigate boxes in a locked storage room, according to a person familiar with the visit. The agents and a Trump lawyer, Evan Corcoran, spent a day reviewing materials, the source said. A second source who had been briefed on the matter told Reuters that the Justice Department also has surveillance footage from Mar-a-Lago in its possession.

Garland’s Justice Department has faced fierce criticism and online threats this week following the search. Trump supporters, and some of his fellow Republicans in Washington, have accused Democrats of weaponizing the federal bureaucracy to target Trump.

The FBI said an armed person had tried to breach its office in Cincinnati early on Thursday in what it called a “critical incident.” Local law enforcement said officers traded shots with a male suspect wearing body armor.

Garland condemned the attacks on employees of the FBI and Justice Department. “I will not stand by silently when their integrity is unfairly attacked,” he said.

READ: FBI search of Trump’s Florida home was ‘by the book,’ ex-prosecutors say

Some Democrats, meanwhile, have criticized Garland for being overly cautious in investigating Trump over his attempts to overturn his 2020 election loss to Biden.

Republican reaction to Garland split between those ready to attack the attorney general and the FBI for the Trump search and others who warned against rhetoric that could undermine federal law enforcement.

“I have been ashamed to hear members of my party attacking the integrity of the FBI agents,” Representative Liz Cheney, the Republican vice chair of the House committee investigating the Jan. 6, 2021, attack on the U.S. Capitol by Trump supporters, wrote on Twitter. “These are sickening comments that put the lives of patriotic public servants at risk.”

Republican Senator John Cornyn mocked Garland for suggesting the search could have been conducted quietly.

“Who would possibly believe that an application and issuance of search warrant for a former President’s home and subsequent search could be done ‘quietly?'” the Texas Republican asked on Twitter.