FBI search of Trump’s Florida home was ‘by the book,’ ex-prosecutors say 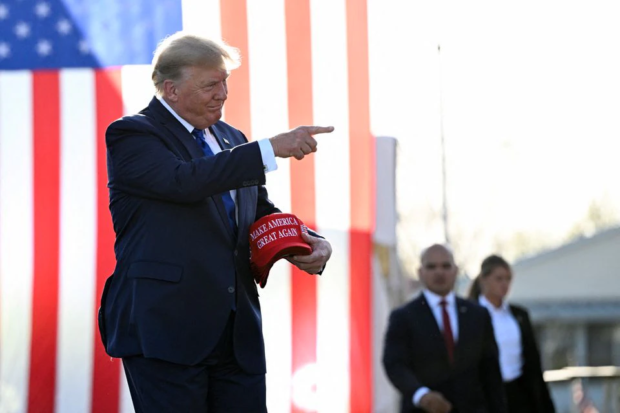 Former U.S. President Donald Trump gestures during a rally to boost Ohio Republican candidates ahead of their May 3 primary election, at the county fairgrounds in Delaware, Ohio, U.S. April 23, 2022. REUTERS FILE PHOTO

WASHINGTON — The U.S. Justice Department’s silence about its search of former President Donald Trump’s Florida home is a sign of an investigation being run “by the book,” former federal prosecutors said on Tuesday.

Trump disclosed on Monday that FBI agents were at his Mar-a-Lago resort in Palm Beach.

The search was part of the Justice Department’s investigation into Trump’s removal of presidential records considered official government property from the White House at the end of his term in January 2021. The department was notified this year that Trump had taken classified material after the National Archives, the agency tasked with preserving government records, revealed it had recovered 15 boxes of records from Mar-a-Lago, some marked as classified national security information.

The Justice Department and Attorney General Merrick Garland have said nothing about the search, not even confirming that federal agents were at Trump’s property. Former federal prosecutors said that by remaining silent, the department is playing by rules intended to ensure fair treatment for targets of investigations.

“Their job is to conduct investigations in accordance with the law and to not prejudice the rights of the people they are investigating while they do it,” said Kristy Parker, a former federal prosecutor now working with the advocacy group Protect Democracy. “What we are seeing is a by-the-book process, and that is a good sign that we have an independent Department of Justice.”

President Joe Biden was not given advance warning of the search, according to a White House official.

Much is still unknown about the search warrant, which remains under seal, or the sworn statement that an FBI agent had to present to a magistrate judge to win court approval to search a former president’s home.

“It’s such an enormous, unprecedented thing to search a former president’s home that I am confident they wouldn’t do it unless they felt they had a pretty compelling reason,” said former prosecutor Randall Eliason, who said he believes the Justice Department is wise to remain mum.

“They are not going to do this for some nickel-or-dime case involving a guest list from a state dinner that got improperly removed from the White House,” Eliason said.

Garland has also received criticism from the left, with some Democrats calling for his department to be more aggressive in investigating Trump and the Jan. 6, 2021, attack on the Capitol by Trump supporters.

“I remain very concerned that Garland and (Deputy Attorney General) Lisa Monaco are not doing enough to hold the Jan. 6 higher-ups accountable,” said Richard Signorelli, a former federal prosecutor who said he views Garland as an “extreme minimalist and cautious institutionalist.”

“I do believe they dropped the ball,” Signorelli added.

Former U.S. government attorneys with national security expertise said that a case involving Trump’s removal of classified records could be a relatively simple one for the government to bring, compared with the greater legal challenges of trying to prove that Trump knowingly attempted to overturn the 2020 election and provoke the Capitol assault.

As one former government lawyer put it: “He has either got the top secret documents or he doesn’t.”