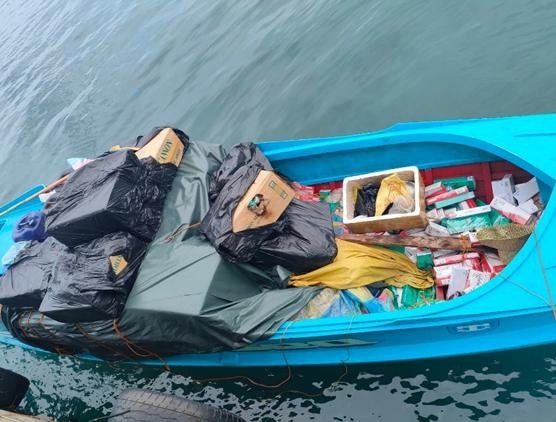 More than P1.5-million worth of smuggled cigarettes seized in a motorized boat off the coast of Zamboanga City on Wednesday, August 10, 2022. (Photo from the Philippine National Police)

MANILA, Philippines — Four individuals were arrested in Zamboanga City after yielding over P1.5 million worth of smuggled cigarettes, the police said Thursday.

The Philippine National Police (PNP) reported that contraband cigarettes amounting to P1,570,800 were seized from a motorized boat off the coast of Barangay Manalipa in Zamboanga City on Wednesday.

Meanwhile, the boat’s captain, Julhasim Said, along with three other suspects – Albaser Said, Akramin Tarawi, and Rahim Said – were arrested by authorities.

“Our personnel asked for specific documents to verify the validity of the transport, but the arrested persons failed to present the legal papers. This is a good sign that our ongoing effort to curb smuggling activities is working well,” PNP chief Gen. Rodolfo Azurin Jr. said in a statement.

The PNP earlier committed to work closely with other law enforcement agencies in strengthening maritime security and intensifying the crackdown against smuggling, especially in the southern Philippines.