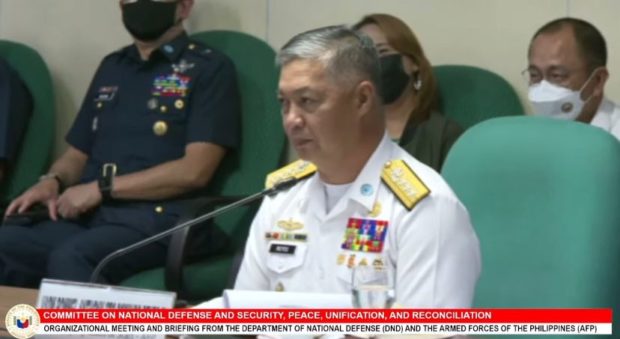 Vice Admiral Rommel Reyes, deputy chief of staff of the Armed Forces of the Philippines (Screengrab during Senate committee hearing on national defense)

MANILA, Philippines — In times of war and calamities, the Philippines can rely on 1.2 million reserve force, a military official told senators on Wednesday.

Vice Admiral Rommel Reyes, deputy chief of staff of the Armed Forces of the Philippines (AFP), disclosed this when he and other military officials attended the Senate committee hearing on national defense.

“Right now sir, we have 1.2 million,” Reyes said, responding to Senator Ronald “Bato” Dela Rosa’s query during the hearing of the Senate committee on national defense.

(At any given time, can we mobilize that 1.2 million?)

“All in all, 1.2 million— that’s across the armed forces and the whole Philippines already,” the official said.

“Thank you, that’s part of our posturing. Po-posturing natin yan, o sige try us, and we have 1.2 M,” Dela Rosa said.

Before this, Reyes explained that the reserve force would be tapped to deter aggressions and help the country, especially in times of calamities.

“So the development of the mobilizable reserve force is not just only for defense and security, and we’re really looking forward for this to be developed, and for the country to realize that it’s not just for defense but for the overall development of our country,” he said.

This is also why the AFP welcomed the review and possible amendment of the National Defense Act, particularly the revival of the country’s Reserve Officers’ Training Corps (ROTC) program.

The issue of the mobilized reserve force cropped up when neophyte Senator Mark Villar inquired about “minimum credible defense posture.”

Reyes explained that this refers to the country’s ability to deter aggression and defend and defeat enemies.

“So when we say minimum, it’s basically to show perceived adversaries that if ever you have plans, we can also hurt you back, he said.

It was at this point that Dela Rosa asked about the number of reserves the country could mobilize to protect and defend country.

“Well, it’s good to hear ating minimum defense posture pala… natin as far as perceived enemies are concerned ay maramdaman nila na we can hurt them also if they want to hurt us,” the senator added.

(Well, it’s good to hear that our minimum defense posture as far as perceived enemies are concerned is that they would feel we can hurt them also if they want to hurt us)