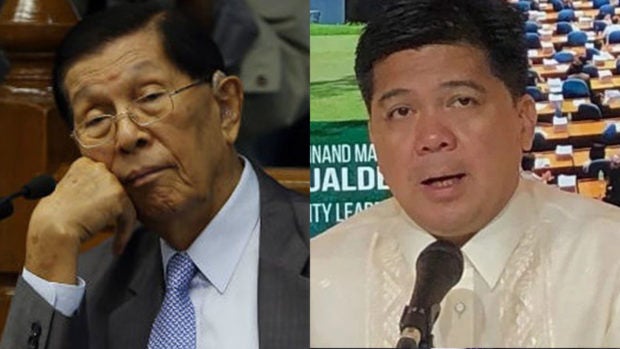 In a Facebook post, Enrile mentioned a photo where Defensor is supposedly seen at an “official function of the [MMDA] that was published in social media.”

“What was Mike Defensor doing in that picture…” he noted. “Was he an official, a consultant, an adviser, a factotum of some sort of MMDA? He was a candidate and loser in the last election, wasn’t he? What was he in that picture? The boss of MMDA? Is that now a proper decorum in our current political world?”

“I suggest we should be very careful in not carelessly showing an arrogance of power in our behavior as public persons, especially if we are somewhat identified with the current regime,” he added.

Enrile issued in a follow-up Facebook post a warning that as legal counsel of President Ferdinand Marcos Jr., he has “a legal and moral duty to protect him from those who tend to take undue advantage of his kindness and their seeming closeness to him.”

“Please! Masyado naman kayo. Huwag naman. (You are all too much. Please don’t.) If you continue with that practice, I assure you, you will be clashing with my office,” he added.

Being the Legal Counsel of the President, I think I have a legal and moral duty to protect him from those who tend to…

It was not clear where Enrile saw the photo, but INQUIRER.net contacted the MMDA for a comment regarding this issue. However, the MMDA has yet to respond to this reporter’s query as of posting time.

To recall, Defensor ran for mayor in Quezon City in the May polls but lost by a wide margin – more than 230,000 votes – to reelectionist Mayor Joy Belmonte.

Read Next
1.2M reserve force ready to defend PH, help during calamities
EDITORS' PICK
Do all the things you do, faster
Motorcycles, smartphones, and cash prizes up for grabs in TNT’s ‘Tuloy Ang Saya’ Raffle in Mindanao
House energy committee chair Arroyo bats for cheap electricity
NCR at increased COVID risk again
New PS-DBM director says DepEd laptop MOA ‘not legal’
House okays budget; ways to go in Senate
MOST READ
Robredo’s tarpaulin portrait at Palace just a ‘placeholder’
Shopee PH gets flak for getting Toni Gonzaga
Robredo supporter tackles elephant in room: No massive fraud in 2022 polls, surveys were just right
DepEd: We are in a crisis situation in education sector
Don't miss out on the latest news and information.