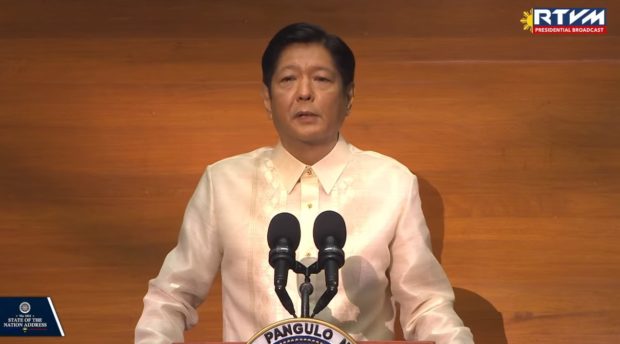 President Ferdinand Marcos Jr. delivers his first State of the Nation Address on Monday, July 25, 2022, at the Batasang Pambansa in Quezon City. Screengrab from RTVM

In his first State of the Nation Address (Sona) on Monday, Marcos Jr. proposed that ROTC be part of the senior high school curriculum in all public and private tertiary schools.

“This seeks to reinstitute the ROTC program as a mandatory component of senior high school programs grades 11 and 12 in all public and private tertiary level educational institutions,” he said.

“The aim is to motivate, train, organize, and mobilize students for national defense preparedness, including disaster preparedness and capacity building for risk-related situations,” he added.

Vice President Sara Duterte earlier expressed hopes that the mandatory ROTC training will be included in the priority legislative agenda of the Marcos Jr. administration.

In 2002, military training was made optional through the National Service Training Program (NSTP) Act of 2001 (Republic Act No. 9163).

In 2001, after he exposed corruption in his school’s military training program, University of Santo Tomas sophomore cadet Mark Welson Chua was killed, which fueled calls to abolish mandatory military training.

What the youth think about mandatory military service