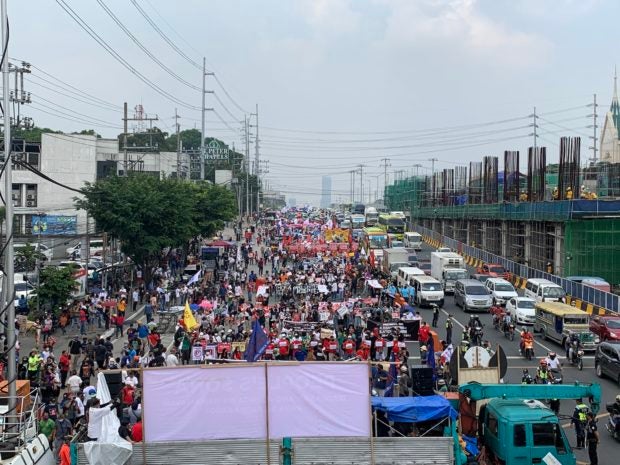 A major highlight of the rally was the destruction of a 12-feet effigy tagged as the “Mad in Malacañang,” which depicted Marcos Jr. as a “party boy” sitting on his throne while feasting on the combined flags of the US and China.

LOOK: Before and after photos of the 12-foot effigy of President Ferdinand Marcos Jr. “Mad in Malacañang” which depicts Marcos Jr. as a “party boy” sitting in his throne.

The effigy was destroyed at the end of the People’s Sona in the middle of the rain. |@zacariansINQ #2022SONA pic.twitter.com/uzvPxcpjv3

Meanwhile, the Quezon City Police District (QCPD) told Inquirer.net in a text message that around 5,000 protesters participated in the event. The same number it first estimated at around 10:36 a.m.

The QCPD also said that it did not record any untoward incidents related to the rallies during the People’s Sona.

The said protest rally dispersed past noon after finishing its program.

It can be recalled that the Quezon City Department of Public Order and Safety initially barred protests along Commonwealth avenue by denying their permit to rally, but was reversed after the city’s local government met with several protest groups, as well as key city administrators, the Philippine National Police and the Department of the Interior and Local Government.

WATCH: What to expect in President Bongbong Marcos’ first SONA?