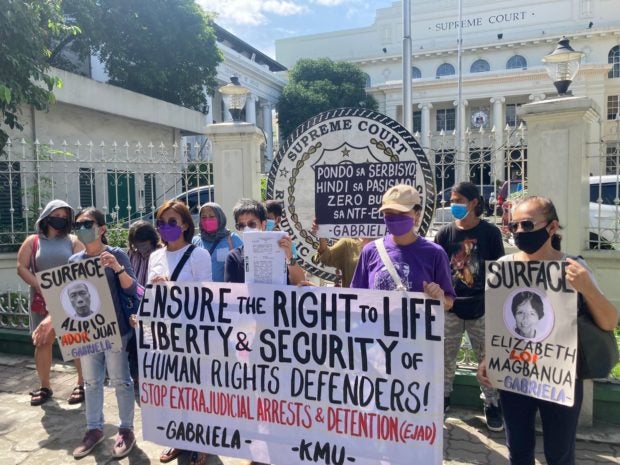 Gabriela and Kilusang Mayo Uno (KMU) members accompany relatives of community workers Elizabeth “Loi” Magbanua and Alipio “Ador” Juat on Wednesday, August 10, 2022, in asking the Supreme Court via writ of amparo to protect and help locate the two individuals who are missing for weeks now. Photo from JUCRA Pool

MANILA, Philippines — Relatives of Loi Magbanua, a women and workers’ rights activist, and Alipio “Ador” Juat, a veteran activist and martial law survivor, on Wednesday asked the Supreme Court to issue a protection order for the two individuals who are missing for weeks now.

Members of Gabriela and Kilusang Mayo Uno (KMU) accompanied the families of Magbanua and Juat in filing the writ of amparo with pleas for a temporary protection order and inspection order.

“We call on the Supreme Court to ensure the right to life, liberty, and security of human rights defenders and labor organizers Loi and Ador by granting them this Amparo. Help us put an end to this new scheme, the extrajudicial arrest, and detention or EJAD employed against activists in the country,” called Gabriela Spokesperson Clarice Palce.

According to the groups, Magbanua and Juat were last seen on May 3 attending a meeting with fellow community organizers in Valenzuela City.

But the daughter of Juat said their father surfaced on May 14, visiting her younger sister, and told her that he is in Camp Aguinaldo, the headquarters of the Armed Forces of the Philippines (AFP). On three subsequent occasions – or on May 27 and June 13 and 27 – Juat also visited his daughters.

Meanwhile, the relatives of Magbanua said they had not heard of her since May 3.

“My father told my sister that on May 3, 2022, he and Loi attended a meeting in Valenzuela. Right after the meeting, they decided to go home together. When they reached the main road, they saw two vehicles on the side of the road. Suddenly, unidentified men grabbed both of them. He fought back, but two heavily built men embraced him tightly and forced him inside one of the waiting vehicles,” said Juat’s daughter Maureen.

Maureen added that her father told them he still could not leave Camp Aguinaldo.

The families believed that both Magbanua and Juat were arrested by the military and detained in a military camp, either at Camp Aguinaldo in Quezon City or Fort Magsaysay in Nueva Ecija.

They said they searched various police precincts and hospitals for Magbanua and Juat, but couldn’t find them. Therefore, they filed a writ of amparo with the Supreme Court to compel the military to let them inspect Camp Aguinaldo and Fort Magsaysay. They believed that their loved ones are being held captive.

The writ of amparo is a remedy available to any person whose right to life, liberty, and security has been violated or under threat. Like a writ of habeas data, it serves as a preventive and curative role in curbing extrajudicial killings and enforced disappearances.

The petitioners were assisted by lawyer Minerva F. Lopez of the Gabriela Legal Services and lawyer Armando C. Teodoro Jr. of the Pro-Labor Legal Assistance Center.