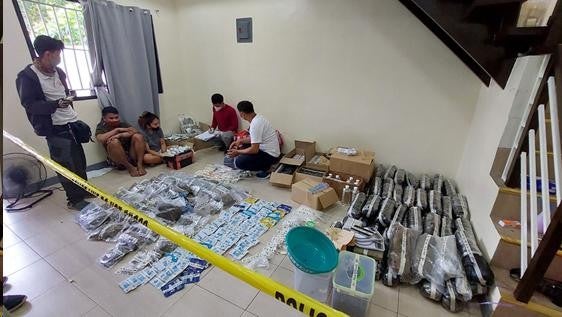 This photo from the Quezon City Police District shows pieces of evidence that they confiscated from a couple in Cubao during a buy-bust operation before dawn on Wednesday, August 10, 2022.

MANILA, Philippines – More than P87 million worth of illegal drugs were confiscated from a couple during a buy-bust operation in Quezon City before dawn on Wednesday, police said.

A Quezon City Police District report said Riza Bilbao, 25, and Alvin Rapinian, 26, were arrested during the operation in Barangay San Roque, Cubao, at around 2:30 a.m. on August 10, after an informant tipped operatives about the two’s illegal drug peddling activities.

Police said a formal complaint for violation of the Comprehensive Drugs Act of 2002 is being readied against Bilbao and Rapinian.

Read Next
SC’s help sought to find missing labor activist, martial law survivor
EDITORS' PICK
Percy Lapid’s kin: ‘We demand that his cowardly assassins be brought to justice’
Nothing’s certain so here’s how everyday Filipinos can make the most out of their Plan B
Do all the things you do, faster
PNP vows to bring justice for slain Percy Lapid; says probe underway
House energy committee chair Arroyo bats for cheap electricity
‘Seniority’ requirement despite vacant posts in DOH bothers senators
MOST READ
Student stabs teacher dead in Samar town
Trixie Angeles quits as press secretary due to health reasons
Not rehired?: Trixie Angeles not on list of reappointed Cabinet execs
Final net satisfaction rating slightly decreases for Robredo, Sotto — SWS
Don't miss out on the latest news and information.