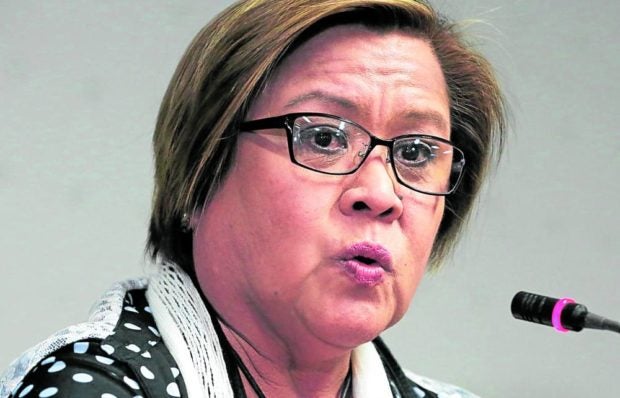 The Office of the Ombudsman has thrown out the complaint filed in 2018 against former Sen. Leila de Lima and her then driver-bodyguard Ronnie Dayan for direct and indirect bribery, citing “glaring inconsistencies” in the allegation that they conspired to raise her 2016 election campaign funds through the illegal drug trade.

The antigraft body’s nine-page resolution was dated Jan. 5 but was received by De Lima’s office only on Monday. It was signed on Feb. 10 by the officer recommending approval, Assistant Ombudsman Jose Balmeo Jr,. and on May 18 by Ombudsman Samuel Martires.

The resolution said there was lack of probable cause to indict De Lima and Dayan despite the testimonies extracted from confessed drug lord Rolan “Kerwin” Espinosa, Ram-Jhon Michael Espinosa and Marcelo Adorco.

“After a painstaking review of the records, it appears that there is no probable cause to indict the respondents (De Lima and Dayan) of the charges against them,” the Ombudsman said in the resolution prepared and signed by Daniel Von Evan Panelo, the assigned graft investigation and prosecution officer.

The testimonies presented by the complainant—a special team of investigators formed by the Office of the Ombudsman—may have appeared to “espouse a well-engendered belief that the respondents had indeed collected bribe money from Kerwin.”

“However, when these statements are read together, glaring inconsistencies become apparent,” the document read. “Inconsistencies which would prevent a reasonable mind from concluding that the respondents are probably guilty of the offenses charged against them.”

It remains to be seen whether the resolution would have an impact on De Lima’s two pending drug cases in the Muntinlupa City Regional Trial Court, for which she has been detained at Camp Crame over the last five years.

Two star witnesses for the government — Espinosa and Rafael Ragos — have earlier recanted their testimonies against De Lima, claiming “pressure” from then Justice Secretary Vitaliano Aguirre II and some his subordinates during the Duterte administration.

De Lima, an opposition leader critical of then President Duterte’s drug war and human rights record, has denounced the drug charges as political vendetta, gaining sympathizers in local and international civil society groups who have clamored for her immediate release.

In his testimony that formed part of the bribery complaint, Espinosa then claimed that he gave Dayan P8 million “in behalf” of De Lima when she was the justice secretary during the administration of the late President Benigno Aquino III.

Kerwin also claimed that he gave money in four tranches — the first handed over in a shopping mall parking lot in Pasay City, the second at a restaurant also Pasay, the third in Baguio City, and the fourth again at the Pasay mall parking lot.

The complaint also alleged that a certain “Juvi Espinido” had called up Kerwin while he was in Batangas, telling him that Dayan wanted to talk to him. Three hours after Espinido called, another person claiming to be De Lima’s aide supposedly called Kerwin “and told him that De Lima instructed him to collect funds in preparation for the 2016 elections.”

“The individual, who Kerwin later on came to know as Dayan, initially asked for P2 million every month but was negotiated to just P700,000 per month with the condition of giving P2 million as ‘good will money’,” the allegation said, as quoted in the resolution.

But the Ombudsman noted that De Lima was “never there” during the alleged transaction and that it was Dayan who supposedly received the money from Kerwin.

In Adorco’s version, it was Espinosa who handed the money directly to De Lima during a lunch in Pasay — which was supposed to be Kerwin and Dayan’s second transaction.

The Baguio transaction, meanwhile, was also “littered with inconsistencies, making it difficult to conclude that Kerwin and the respondents had planned to meet each other there,” the resolution added.

“The inconsistencies in the testimonies of the complainant’s witnesses cannot be brushed (aside) as trivial or inconsequential,” it said. “The incongruities pertain to material details that cast doubt on the veracity of the accusation that De Lima, through Dayan, had collected bribe money from Kerwin.”

The complainants “failed to provide a clear, accurate and consistent narration of facts” crucial in determining whether the elements of direct and indirect bribery were present, it added.

“Preliminary investigation also seeks to secure the innocent against hasty, malicious, and oppressive prosecution. Further, it aims to protect the innocent from an open and public accusation of a crime, from the trouble, expense and anxiety of a public trial,” the resolution stressed. “After all, an acquittal from a manifestly baseless accusation can hardly be considered a situation where justice had triumphed.”