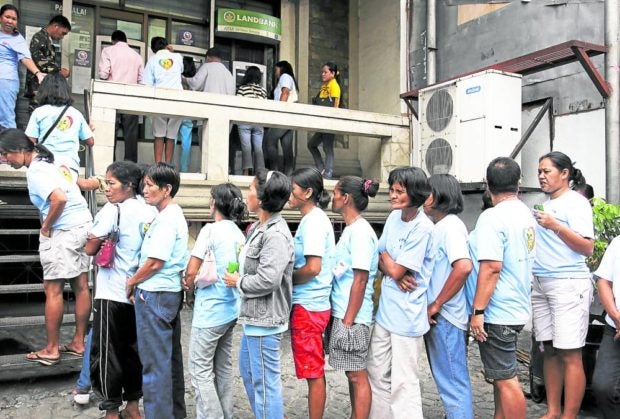 IMPROVING PEOPLE’S LIVES Beneficiaries of the government’s Pantawid Pamilyang Pilipino Program (4Ps) in Lucena City, in this photo taken in 2011, wait for their turn outside a bank to get their monthly cash grants. Families under the program receive assistance to ensure that their children will get health care and education to improve their quality of life. INQUIRER file photo / DELFIN T. MALLARI JR.

MANILA, Philippines — Several lawmakers have condemned the Department of Social Welfare and Development (DSWD) decision to delist some 1.3 million families from the government’s conditional cash transfer program, questioning its timing as poverty is believed to have worsened in recent years.

During Monday’s session at the House of Representatives, Northern Samar Rep. Paul Daza asked what was the basis of Social Welfare Secretary Erwin Tulfo announcement that the 1.3 million families have already graduated from the Pantawid Pamilyang Pilipino Program (4Ps), or they were already out of the poverty threshold.

Daza said that the move is questionable as every indicator pointed to poverty worsening since 2020, due to the combined effects of the COVID-19 pandemic lockdowns and the global economic crisis brought by the Russia-Ukraine conflict and other factors.

“I think we should all be worried that general statements are being said because it’s almost impossible that there are 30 percent of 4Ps families who are now beyond poverty, especially with the recent statistics that poverty incidence in the country rose by 2.6 percent during the pandemic. So mathematically, it doesn’t make sense,” he added.

If anything, the lawmaker said that more families should be included in the 4Ps program, as the lockdowns affected families who had been faring better before the pandemic struck the country.

Including more families in the 4Ps program, Daza noted, would bode well for President Ferdinand Marcos Jr.’s goal of bringing down poverty to single digits before he exits in 2028.

“The President said during the Sona (State of the Nation Address) […] that the target for his administration is to bring down poverty to nine percent. The 4Ps program which is the flagship poverty alleviation program of the government — the policy should be reversed. We probably should be adding more families in 4Ps,” Daza noted.

“So I think there’s some inconsistencies with what we’ve heard from the executive branch, and this is something I think that the House of Representatives should look into,” he added.

Daza was referring to Press Secretary Trixie Cruz Angeles’ statement about Tulfo looking to delist 1.3 million families who have already graduated from poverty, which means they are no longer be eligible to receive cash dole-outs from the government.

Tulfo’s plan is expected to free up P15-billion worth of funds that would be allocated to new members of the program.

Rep. Jonathan Clement Abalos of the 4Ps party-list — the namesake of the program — meanwhile agreed with Daza’s take, stressing that only a small number of families have genuinely graduated from 4Ps prior to Tulfo’s plan, despite many being delisted.

According to Abalos, of the 1.2 million households who are no longer receiving benefits under 4Ps since the Aquino administration implemented it, 516,000 have pending issues to resolve but are still eligible, which means that they are not out of poverty.

Only 619,836 families have been deemed true graduates as their income rose above the poverty line, or are no longer eligible for the program.

“Based on DSWD official reports, the 4Ps has already served 5.5 million poor households nationwide since its inception. As of March 31, 2022, a total of 4.2 million households are still eligible to receive cash grants. This gives us a different of 1.2 million households — 516,000 of which are still eligible to receive grants but on hold pending data updates or resolution of grievance,” Abalos said.

Gabriela Rep. Arlene Brosas and Albay 1st District Rep. Edcel Lagman also supported Diaz’s speech, with the latter noting that self-rated poverty, or the belief that one’s family is actually poor, being even higher than the government data on poverty.

However, lawmakers are not the first to oppose Tulfo’s move. Last July also, several former officials of DSWD said that the system where the government would give cash incentives to people who exposed unqualified 4Ps beneficiaries would make recipients turn against each other, similar to the “Makapili” during the Japanese occupation era.

The Makapili was a dreaded and loathed part of society, as they were Filipinos who sided with the Japanese in spying and exposing alleged guerrilla fighters. Senator Koko Pimentel, meanwhile, said that this system veers away from the goal of the 4Ps, which is to help poor families.