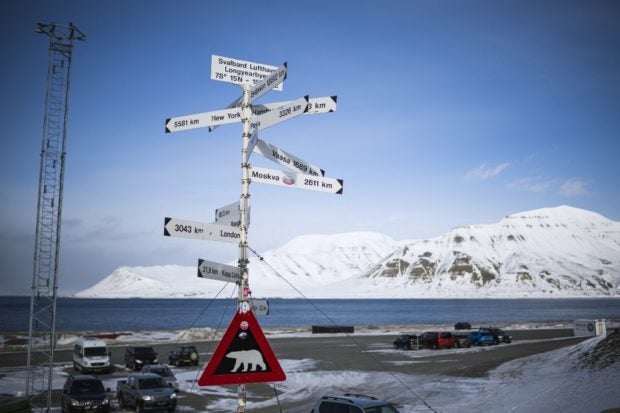 A warning sign depicting a polar bear is erected at the side of a road outside Longyearbyen airport on May 2, 2022, in Svalbard Archipelago, northern Norway. (Photo by Jonathan NACKSTRAND / AFP)

Oslo, Norway — A French woman was injured Monday by a polar bear that entered her camp in the Svalbard archipelago in Norway’s Arctic but her injuries are not life-threatening, authorities said.

The woman, whose identity has not been disclosed, was part of an expedition of 25 people who were camping outdoors on the territory twice the size of Belgium, just over 1,000 kilometers (620 miles) from the North Pole.

“A bear entered a camping area this morning around 8:30 am (0630 GMT) and injured a French woman in the arm”, the head of the local police, Stein Olav Bredli, told AFP.

“Her life is not in danger,” he said.

The woman was evacuated by helicopter to a hospital in Longyearbyen, the archipelago’s main town.

“It’s a woman in her forties who has been lightly injured,” a spokeswoman for the hospital authorities, Solveig Jacobsen, told AFP.

The exact circumstances of the incident have not been disclosed.

“Shots were fired at the polar bear, who was scared off and left the scene,” Bredli said.

The animal was later located and put down, due to the extent of its injuries.

In Svalbard, it is mandatory to carry a rifle outside urban areas in case of an encounter with a polar bear. Males can weigh between 300 and 600 kilos (660 to 1,320 pounds), while females are about half that size.

A tally from 2015 put the number of polar bears on Svalbard at around 1,000. The animals have been a protected species since 1973.

Around 300 of them live in the archipelago year-round. Some have returned to the western part of the territory — the most inhabited area — where they were decimated when they were still allowed to be hunted.

Six people have been killed in polar bear attacks on the archipelago since 1971, the most recent in 2020 involving a 38-year-old Dutchman.

According to experts, shrinking sea ice caused by global warming is depriving polar bears of their preferred food, seals, pushing them to approach populated areas in search of other sources of nourishment.

Polar bear rescued after tongue got stuck in can