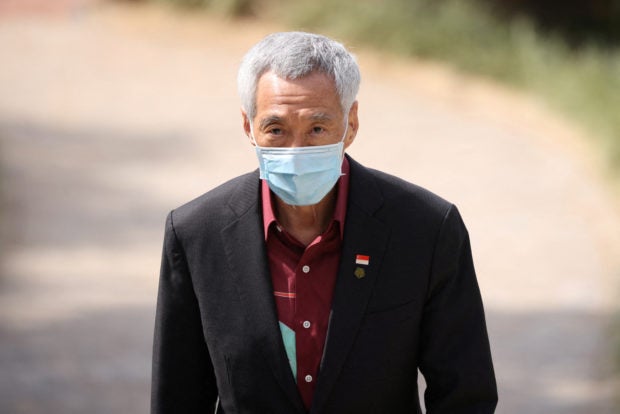 FILE PHOTO: Singaporean Prime Minister Lee Hsien Loong arrives for the Leaders’ Retreat, on the sidelines of the Commonwealth Heads of Government Meeting at the Intare Conference center in Kigali, Rwanda June 25, 2022. Dan Kitwood/Pool via REUTERS

SINGAPORE  — Singapore Prime Minister Lee Hsien Loong on Monday warned of the scope for miscalculations over tensions in the Taiwan Strait, which he said were unlikely to ease soon amid deep suspicion and limited engagement between the United States and China.

In a televised address ahead of the city-state’s national day on Tuesday, Lee said Singapore would be buffeted by that intense rivalry and tension in the region, which should prepare for a future less peaceful and stable than now.

“Around us, a storm is gathering. US-China relations are worsening, with intractable issues, deep suspicions, and limited engagement,” Lee said.

“This is unlikely to improve anytime soon. Furthermore, miscalculations or mishaps can easily make things much worse.”

Lee said economic challenges were more immediate and that Singapore’s outlook has “clouded considerably,” adding that the government will roll out more measures in coming months to help people cope with rising prices.

Singapore’s inflation has reached more than a decade-high in recent months, and its central bank tightened its monetary policy on July 14 in an off-cycle move to cope with the cost pressure.

“The world is not likely to return anytime soon to the low inflation levels and interest rates that we have enjoyed in recent decades,” he said, adding the country of 5.5 million people must plan far ahead and transform industry, upgrade skills and raise productivity.

US eyes de-escalation of tension with China, but will stand with Taiwan