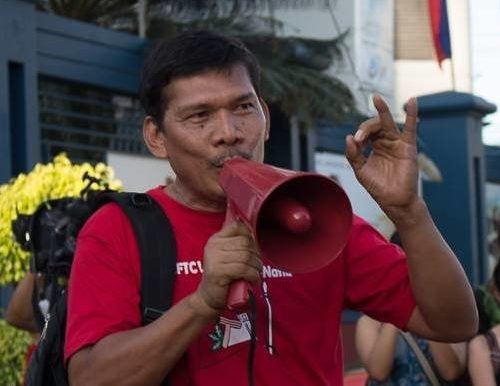 (The cyberlibel case against Walden Bello will never be justified because it is clear that the motivation behind it is political repression.)

(Repression against the critic and all those who are critical of their administration.)

De Guzman then called on the Department of Justice (DOJ) to revoke the warrant against Bello, and also called on lawmakers to decriminalize libel.

Bello was arrested on Monday afternoon due to a cyber libel case filed against him by former Davao City Information Officer Jefry Tupas, who worked under Vice President Sara Duterte during her mayoralty stint in Davao City.

The former lawmaker was then indicted for violation of the Revised Penal Code and the Cybercrime Prevention Act of 2012 in a seven-page resolution dated June 9.

Bello is known as a staunch critic of both the current administration and the Duterte administration, even when he ran in the 2022 national elections against Sara Duterte.

Meanwhile, others have also called for Bello’s release following the arrest. One of which was former senatorial candidate Atty. Luke Espiritu, called on the public to condemn the libel case against Bello as it was obviously “politically motivated.”

(Fight the tyrannical suppression of our rights! Unite to call for the release of Walden.)

Kabataan Rep. Raoul Manuel also called for Bello’s release, accusing those in power of “weaponizing the law” against critics like Bello.

“Those in power weaponize the law (e.g. cyber libel) to attack Bello, a staunch critic of the tyrannical rule of Dutertes, Marcoses. He and all political prisoners in PH must be out of jail!” he said.

Those in power weaponize the law (e.g. cyber libel) to attack Bello, a staunch critic of the tyrannical rule of Dutertes, Marcoses. He and all political prisoners in PH must be out of jail!#FreeWaldenBello#FreeAllPoliticalPrisoners#StopTheAttacks

Other progressive groups like Congress of Teachers, Educators for Nationalism and Democracy (Contend) and the Samahan ng Progresibong Kabataan (Spark) also criticized the arrest, tagging it as an “unjust” attempt to “silence criticism and dissent.”

Progressive teachers of CONTEND UP condemn the arrest of fellow academic and activist Walden Bello in his home at around 4 this afternoon.

Academics, unite and stand for freedom of speech and thought!#DefendAcademicFreedom!#HandsOffWaldenBello! pic.twitter.com/pFgKp9dTYl

Earlier today, labor leader and former vice-presidential candidate Walden Bello was arrested and sent to Quezon City Police Station 8, after reportedly being served a warrant of arrest for a recent libel indictment.