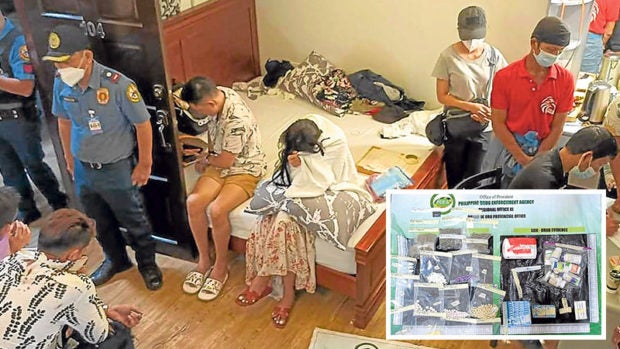 RESORT DRUG BUST Police officers stand at the doorway of a room where some of the drug suspects were arrested in a raid on a beach resort in Mabini, Davao de Oro province, on Nov. 6. In all, 17 were arrested and P1.56 million worth of illegal drugs, including LSD, “shabu” (crystal meth) and marijuana (inset), were seized by the authorities. —PHOTO FROM PDEA-REGION 11

DAVAO CITY, Davao del Sur, Philippines — The Davao City government’s information officer, Jefry Tupas, resigned and was fired on the same day after she attended a birthday party where authorities seized about P1.5 million worth of illegal drugs and arrested 17 people during a raid, Mayor Sara Duterte said on Tuesday.

In a text message, Jefry Tupas, the former information officer and ex-correspondent for the Inquirer, admitted that she was at the party held on Saturday at a beach resort in Mabini town, Davao de Oro province, “because, like the other guests, I was invited.”

“But I left right after dinner with my boyfriend and another friend. I did not even drink,” Tupas said.

Duterte did not elaborate on what Tupas’ involvement was in the antidrug operation which was led by the Philippine Drug Enforcement Agency (PDEA).

The mayor said “details of the raid are known only to the PDEA officers in Davao de Oro and Ms Tupas.”

Photographs showing Tupas at the party circulated on social media over the weekend but her name was not on the list of people arrested at the party.

“Last Sunday, Jefry signified his resignation and on the same moment he was informed that he is terminated from work with the city government of Davao,” Duterte said in a statement on Tuesday.

Tupas, 43, identifies as a woman and the Inquirer abides by an individual’s sexual identity.

Agents of the PDEA, the National Bureau of Investigation and officers from the Mabini town police raided the resort in Barangay Pindasan on Saturday, where 17 individuals “caught in the act having a drug session,” were arrested, the PDEA said in a statement.

It was an exclusive party with a strict “by invitation and no tag along policy,” supposedly organized to celebrate the birthday of Revsan Elizalde, a resident of Davao City, and the PDEA’s main target for the operation.

Authorities arrested Elizalde allegedly in the act of selling a party drug and P6,000 worth of marijuana to an undercover agent, according to the PDEA.

Following the arrest of Elizalde and the 16 others, a rumor spread that some people at the party were not apprehended quickly spread on social media, along with photographs of Tupas, whose presence was not mentioned by law enforcers in their report on the raid.

When asked about the photo showing her holding a bottle after she told the Inquirer that she didn’t even have a drink, Tupas said that it was only to oblige the request of some friends there for a photo.

It is not yet known whether Tupas is a suspect or a person of interest.

In Manila, PDEA spokesperson Derrick Carreon did not comment when asked whether Tupas would be invited for investigation or questioning. 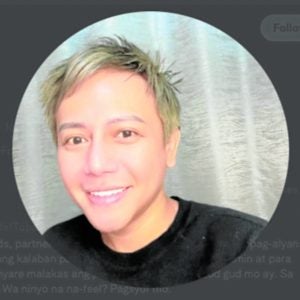 “The suspects are now detained at NBI detention facility,” the PDEA said in a statement, adding that charges of violation of the Comprehensive Dangerous Drugs Act of 2002 were being prepared against the alleged “drug personalities.”

The statement said the seized illegal drugs were sent to the laboratory of the PDEA regional office for examination.

Tupas worked as a correspondent for the Inquirer from 2003 to 2015 before she joined the Davao City government as the mayor’s chief information officer in 2016.

She first used the byline Jeffrey M. Tupas but eventually changed this to Jefry Tupas.

The Nov. 6 raid and Tupas’ alleged involvement was seen as a blow against the controversial war on drugs being waged by the administration of President Duterte, the mayor’s father, which has its roots in Davao City.