7.1% GDP growth in Q3 despite curbs due to Delta surge 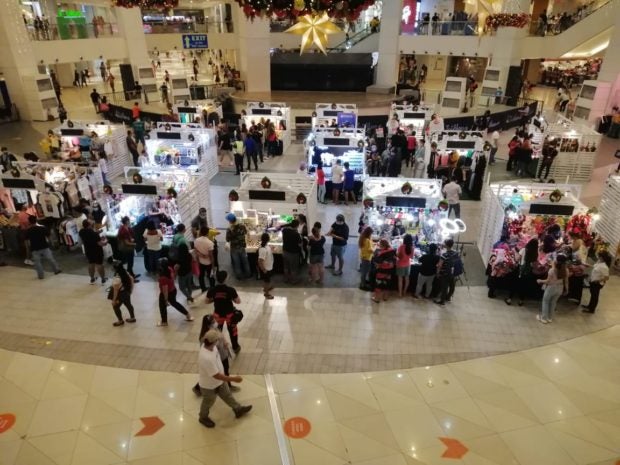 People while their time at a big shopping mall in Quezon City on Saturday, November 6, 2021. The government’s pandemic task force has placed the entire Metro Manila under COVID-19 Alert Level 2 since November 5. INQUIRER.net/Katherine G. Adraneda

The Philippine economy grew by 7.1 percent in the third quarter following the reopening of more businesses and despite the lockdown in August caused by the Delta variant-induced surge in COVID-19 cases, the government announced on Tuesday.

This was above expectations of most private economists polled by the Inquirer, but slower than the second-quarter economic expansion of 12 percent.

In the third quarter of last year, gross domestic product (GDP) shrank by 11.6 percent as many economic activities were stopped by a prolonged COVID-19 lockdown.

National Statistician Dennis Mapa said GDP—a measure of the economy that sums up the total value of goods produced and services rendered in the economy for a given period—grew by 4.9 percent during the first nine months of 2021, or at the upper end of the government’s target range of 4-5 percent.

Mapa said GDP needed to grow by at least 1.7 percent in the last three months to achieve the lower end of the government’s full-year target, and 5.3 percent to hit the top.

“In the third quarter of 2021, we contained the Delta variant and sustained our economic expansion even as stringent quarantines were in place. Our strategy was correct. The results are clear,” said Chua, who heads the state planning agency National Economic and Development Authority (Neda).

Chua said the pace of economic recovery was accelerating and most of the country could move to the least restrictive alert level 1 by the end of this year or early 2022 alongside declining COVID-19 cases.

Malacañang on Tuesday welcomed the third-quarter economic expansion, which the government’s economic team said was among the highest in Southeast and East Asia.

“Even if this was lower than the 12-percent growth in the second quarter, this is still good news because the growth took place in the middle of strict quarantine that we implemented amid the Delta variant,” presidential spokesperson Harry Roque said in a press briefing.

The Palace expected this to improve now that quarantine restrictions have been eased and more businesses have been allowed to expand their operating capacity after Metro Manila was placed under alert level 2, he said.

Presidential Communications Operations Office Secretary Martin Andanar added that the country’s economic performance should encourage more people to participate in the national COVID-19 vaccination program “as we can see the tremendous and positive impact it has on our recovery from the pandemic as one nation.”

Data from the Philippine Statistics Authority (PSA) showed that the services sector expanded by 8.2 percent in the third quarter, reversing the 10.6-percent decline a year ago.

However, the agriculture, forestry and fishing sectors shrank by 1.7 percent during the third quarter, reversing the 1.2-percent growth a year ago.

Chua said the agriculture sector and its employment remained seasonal and vulnerable to bad weather, thus the negative contribution to GDP in the third quarter.

“Growth was primarily driven by household consumption, which grew by 7.1 percent and accounted for 5.2 (percentage points) of overall GDP growth. This strong rebound points to improving consumer confidence. We expect this to be sustained in the fourth quarter given more relaxed restrictions and a higher vaccination rate,” Chua said.

“Government expenditure returned to a positive growth trend at 13.6 percent, reversing its contraction in the previous quarter. Moreover, total investments increased by 22 percent, driven by public and private construction that grew by 55.3 percent and 12.2 percent, respectively. The government’s decision to allow all construction activities to resume regardless of the area’s quarantine status must be credited for this,” Chua added.

“The high growth of imports reflects the strong recovery of consumption and investment spending. The moderate growth of exports reflects both the global recovery as well as global logistics issues,” he added.

Chua expressed optimism that the prepandemic GDP level could be attained by the first quarter of 2022.

Chua also said the move to upper middle-income country status was imminent within 2022 on expectations of a broad-based economic growth in the coming quarters.

“We’re also hoping sectors affected by quarantines will see stronger recovery due to increase in capacity” under targeted and granular lockdowns, Chua said.

Trade Secretary Ramon Lopez said he expected the fourth quarter to show a stronger economic performance since the government has been reopening more sectors and deescalating the community quarantine levels.

“The vaccine rollout to the countryside and the new pharmaceutical treatments also add to the confidence that the recovery momentum will accelerate in the coming months,” he told reporters in a Viber message on Tuesday.

Francis Lim, president of the Financial Executives Institute of the Philippines, echoed this optimism, pointing to increased spending by consumers during the Christmas season.

“We are pleasantly surprised by the better-than-expected performance of our GDP in the third quarter. It was truly a feat considering the reimposition of ECQ and the typhoons in several parts of the country,” Lim said in a Viber message.

—WITH REPORTS FROM LEILA B. SALAVERRIA, JEROME ANING AND ROY STEPHEN C. CANIVEL