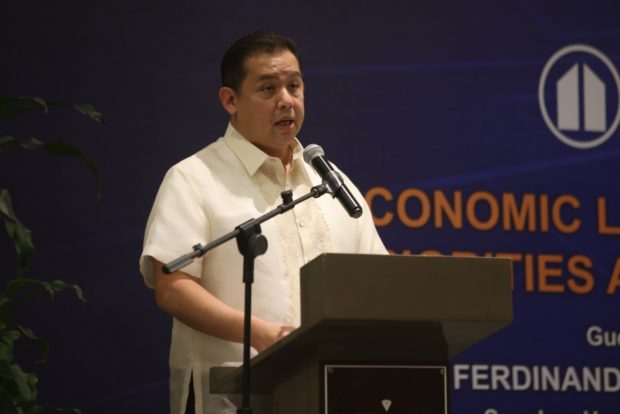 Speaker Martin Romualdez delivers his speech before the members of the Philippine Chamber of Commerce and Industry on Thursday, August 4, 2022. (Photo from Speaker Ferdinand Martin Romualdez’ office)

MANILA, Philippines — Speaker Ferdinand Martin Romualdez has cited the case of Iloilo City as a model for public-private partnerships (PPP), a mode of project-making being sought by the current administration with the private sector.

Romualdez said on Monday that he fully supports the call of President Ferdinand Marcos Jr. for more PPPs in the country, noting that the partnership entered by Iloilo under Mayor Jerry Treñas for the redevelopment of two public markets is a good example.

He said that having the private sector help in such projects is important as it would take away a huge chunk of budgetary and construction burdens from local government units (LGUs).

“I support the appeal of President Bongbong Marcos for LGUs to get into more PPPs to speed up growth in the regions, which in turn will generate employment and livelihood opportunities for our people,” Romualdez said.

“Local governments could tap big companies (like) the Iloilo City-SM market development project (that) would benefit thousands of vendors and small, medium and micro entrepreneurs,” he added, referring to the PPP entered by the Iloilo City government with SM Prime Holdings Inc.

The project involved a 25-year lease agreement for the redevelopment of the Central Market and Iloilo Terminal Market at no cost to the city, and is expected to benefit about 2,800 market vendors.

Recent reports said the company, through its famous SM Supermalls, would redevelop the two markets for P1.5 billion each or P3 billion in total.

Among the changes to the markets that would be implemented are improvements to the internal facilities like ingress and egress points for delivery of the goods, more parking spaces, installation of security cameras, comfort rooms, and implementation of solid waste management and wastewater treatment.

Romualdez pointed out that aside from public markets, there are a number of other projects that the LGUs could offer to private investors for funding and development arrangements, such as toll roads, hospitals, irrigation systems, and housing areas.

These could easily attract private funding because such projects would not run out of customers and users, he added.

LGUs could go into PPPs for diversion roads that would decongest these areas and promote faster travel, he said.

Treñas — a supporter of Marcos’ opponent in the last elections and one of the local officials often criticized by former president Rodrigo Duterte — is back as Mayor of Iloilo after getting over 70 percent of the votes during the last elections.

The local chief executive promised that under his fresh term, the city would improve healthcare facilities and the city’s markets.

The Marcos administration seems to be moving towards PPP as a funding source for projects, as the President told LGUs to partner with private firms more often.

Marcos said that LGUs must be open to the possibility of incorporating PPP into the city’s projects.