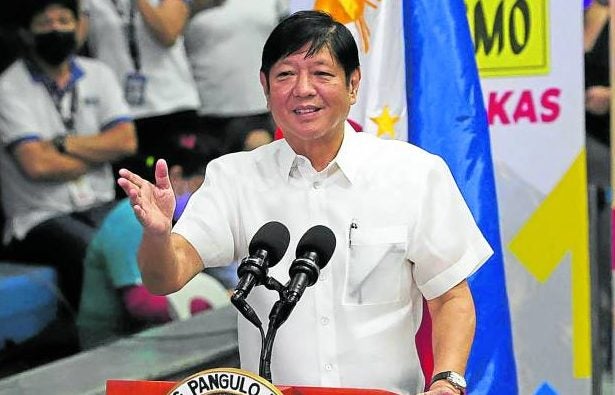 MANILA, Philippines — As mayors and governors now have the burdensome task of implementing programs and projects that otherwise should be done by agencies of the national government, President Ferdinand “Bongbong” Marcos Jr. called on local government units (LGUs) to be open to public-private partnership (PPP) as a mode of financing undertakings in their provinces, cities, and towns.

“I think this is the way forward, and I encourage all our [LGUs] to be open to the possibilities of PPPs, especially in your areas,” he said in a brief meeting with officials of the League of Cities of the Philippines (LCP) in Malacañang on Tuesday.

The president said infrastructure and digitalization were among the focus of his administration and LGUs could join in implementing various projects through PPPs.

“There are plenty of opportunities, especially in infrastructure. We have friends from various countries — especially the ambassadors who paid us courtesy calls — they are offering us a lot of help,” he added.

A PPP is a long-term arrangement between a government unit and private companies. It usually involves using private capital to finance government projects such as toll roads, hospitals, and airports, and then allowing the private financiers to collect fees from taxpayers or users over the duration of the PPP contract.

Aside from helping cash-strapped governments build much-needed public infrastructure at no money outlay on their part, this can help LGUs by tapping private sector expertise in undertaking big projects.

Starting this year, LGUs will be handling big-ticket programs and projects previously carried out by the national government.

This followed the decision of the Supreme Court in 2018 granting the petitions of Batangas Gov. Hermilando Mandanas and the late former Bataan Gov. Enrique Garcia Jr. that the LGUs’ internal revenue allotment or IRA (which is now called the national tax allotment or NTA) should come from 40 percent of “all” national taxes—not only from the Bureau of Internal Revenue as was done in the past but also from the Bureau of Customs’ collections of import duties and other taxes.

The result is that for 2022, LGUs will be getting a record P1.08 trillion of the national budget through their NTA, according to earlier estimates by the Department of Budget and Management. In 2021, this amounted to only P695.49 billion.

Faced with a smaller share of the overall tax revenues, then President Rodrigo Duterte signed Executive Order No. 138 in early June 2021 stipulating that the national government will “devolve” or transfer to LGUs the implementation of formerly national government functions.

In his meeting with the LCP officers, however, the president said he has formed a team headed by the Department of the Interior and Local Government (DILG) to look into issues of devolution and decentralization arising from the implementation of the Mandanas-Garcia ruling.

Marcos recalled that he already had “extensive discussions” with Mandanas and the late Interior Secretary Jesse Robredo on the devolution issue when he was chair of the Senate committee on local government.

The original concept, he said, was to use the IRA for the fourth, fifth, and sixth class provinces or LGUs and provide assistance to provinces that operated hospitals but didn’t have the funds.

The remainder of the IRA would be given according to the provisions of the Local Government Code that varies depending on the LGUs, he said.

However, there were difficulties in applying the ruling to some cities, and the decision-making on fund appropriation was left to the discretion of local executives, according to the president.

“Also, some [functions] have been given to local governments, sometimes it can’t be done because we don’t have a new item [in the budget], we don’t have new funds, and we don’t have training for whatever [purpose] it is for,” he said.

He said one example was the land use plan, wherein several LGUs faced difficulty in implementation because of the lack of money and qualified personnel, adding that this work could be given to the national government.

Even the repair of school buildings was a contentious issue, Marcos said, because it was not clear if the national or the local government should be responsible.

The president suggested that the national government could provide additional allocation to the LGUs mandated by law to conduct school building repairs.

He said the Department of Education did not have enough budget for school repairs, but that he proposed to Vice President and Education Secretary Sara Duterte to just give materials, funds, or other forms of assistance to the LGUs.

IN THE KNOW: The Supreme Court’s Mandanas ruling

DILG: LGUs must use funds from bigger share of PH taxes for development