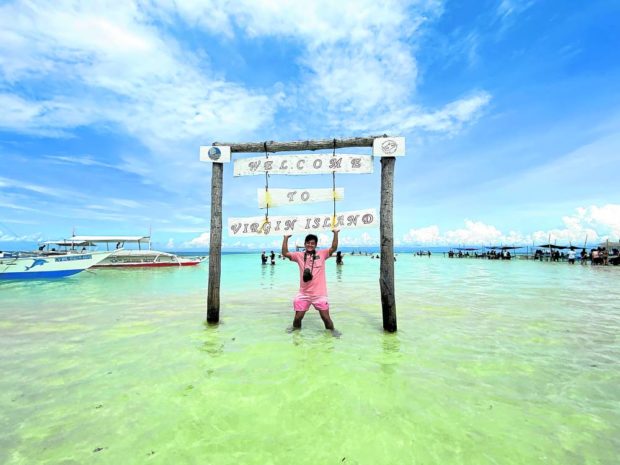 POPULAR SPOT | The sandbar on Virgin Island in Panglao, Bohol, is among the most popular tourist spots in the province. Local vendors set up makeshift seafood stalls there to take advantage of visitor traffic but a complaint over pricing that went viral on social media puts their livelihood at risk. (Photo by LEO UDTOHAN / Inquirer Visayas)

PANGLAO ISLAND, Bohol, Philippines — Gov. Aris Aumentado has ordered the suspension of trips to Virgin Island here while an investigation is being conducted over the alleged overpricing of food sold to tourists at a popular sandbar.

Aumentado on Tuesday expressed dismay over reports that a group of 13 tourists was charged P26,100 for the seafood that they consumed during a recent trip.

“We are grateful to social media because it has given us a solid reason for the Sangguniang Panlalawigan to craft resolutions or ordinances that can provide protection and order to tourists that have been exploited for a long time by some businessmen in Panglao and other cities,” he said in a post on Facebook.

Aumentado said the Department of Environment and Natural Resources (DENR) wanted to close Virgin Island after its officials found out that vendors and tourists violate guidelines on waste management in the area and that businessmen there lacked business permits.

Also among the DENR findings were the unregulated prices of food and the “double collection” of environment user and protected area fees.

“The DENR wants to close the island to tourists. I, as governor, support the plan of DENR because what happened damaged our tourism industry because many people have complained. We will find a solution for this,” the governor said.

Tourism Secretary Christina Frasco, in a statement, said she was grateful to Aumentado and Panglao Mayor Edgardo “Boy” Arcay for immediately conducting an investigation on the matter.

“The alleged overpricing of seafood by vendors [on] Virgin Island … is a matter that the Department of Tourism (DOT) takes seriously, especially as it concerns the welfare of tourists whose continued support for our destinations is critical to the recovery of the tourism industry,” she said.

Frasco said her office also requested the Department of Trade and Industry to ensure that “reasonable pricing standards are upheld for purposes of consumer protection.”

“While the DOT understands the current predicament and challenges faced by many tourism-related businesses and establishments that are gradually recouping losses due to previously imposed travel restrictions, I believe that due care must always be given to the overall experience of tourists whether it concerns upholding the quality of accommodations, attaining a certain level of service, or ensuring the reasonable pricing of products,” she said.

Arcay on Tuesday talked to vendors on Virgin Island and warned them about the implications of overpricing food and other items sold there. 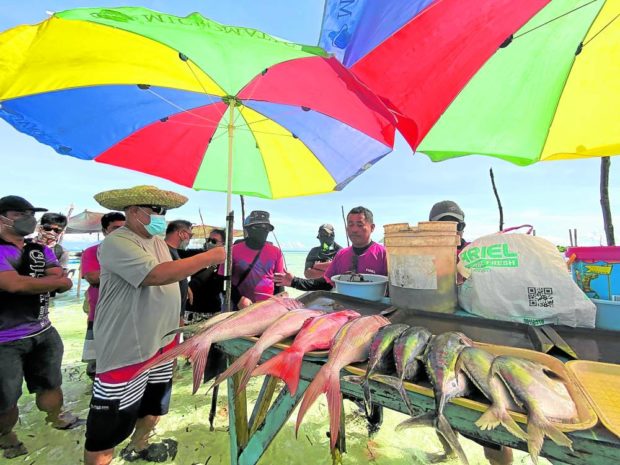 “If you overprice goods, no one will visit Panglao ever again,” Arcay said. “We should take care of the Virgin Island because this is our treasure. Tourists come to Panglao because of beautiful beaches [as well as] honest and hardworking people.”

On Monday, Vilma Uy posted on Facebook that her friend’s group who visited Virgin Island paid over P26,100 for their food. “Is this how expensive food at Virgin Island, Bohol is?” said Uy in her post.

Engineer Eulalio Colubio Jr., who went to Virgin Island with 12 others on July 29 for an island-hopping activity, filed a complaint at the Panglao Tourism Office regarding the high food prices on the island.

Colubio’s wife, Joeper, said they ordered a variety of seafood for lunch and expected to pay only P12,000 to P15,000. After lunch, they were told that their bill reached P26,100.

“We have no intention to ruin their [vendors] reputation. I hope they will put the right price to what they are selling,” she said.

Fidel Clenista, 57, and the vendor from whom the group bought their food, said he informed the Colubios about the price before they ordered the food. He said it was the first time a customer complained about their pricing in his eight years of selling food on Virgin Island.

“We might end up losing our livelihood because of what they (Colubios) did to us. Many vendors will be affected,” Clenista said.

“There is no overpricing here. That’s really the price of the food,” he said in Cebuano.

DOT regional office to give guidance on pricing on Virgin Island