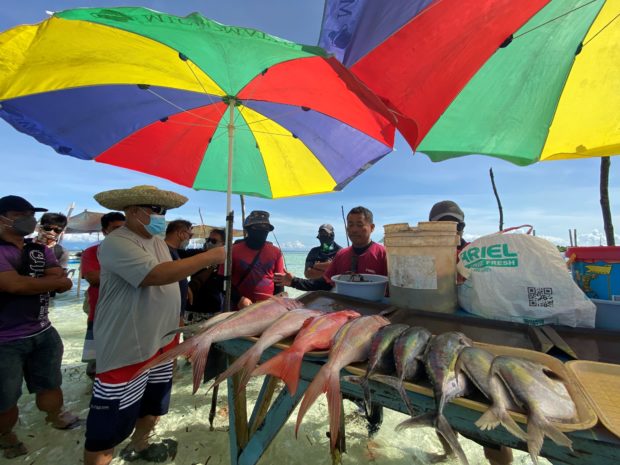 PANGLAO ISLAND, Bohol — The local government of Panglao has launched an investigation over the alleged overpricing of food in a sandbar here.

Panglao Mayor Edgardo “Boy” Arcay on Tuesday personally went to Virgin Island, which was a half an hour’s drive from mainland Panglao.

The local chief executive talked with vendors on the island and warned them about the implications of overpricing food and other commodities.

“If you overprice goods, no one will visit Panglao ever again,” Arcay said.

“We should take care of the Virgin Island because this is our treasure. Tourists come to Panglao because of beautiful beaches (as well as) honest, and hardworking people,” he added.

During his conversation with vendors, it was agreed that vendors would place a price tag on their food.

On Monday, a certain Vilma Uy posted on Facebook that her friend’s group who visited Virgin Island paid over P26,100 for the food they ordered.

Engr. Eulalio Colubio Jr., who went to Virgin Island with 12 other individuals on July 29 for an island-hopping activity, filed a complaint at the Panglao Tourism Office regarding the high food prices on the island.

READ: Victim of overpriced food in Bohol hopes matter will be addressed

Saying they were duped by one of the vendors, Colubio hoped the local government will address the incident.

Colubio’s wife Joeper said they ordered a variety of seafood for lunch and expected to pay only P12,000 to P15,000.

“We heard it’s expensive to dine there,” she said.

After lunch, they were told that their bill reached P26,100.

Since they only bought P19,000, they told the vendor they would pay the remaining balance when they reached mainland Panglao. They subsequently paid P6,000 through GCash.

“We have no intention to ruin their (vendors) reputation. I hope they will put the right price to what they are selling,” she said.

Fidel Clenista, 57, and the vendor from whom the group bought their food, said he informed the Colubios about the seafood price before they ordered the food.

He said it was the first time a customer complained about the price in his eight years of selling food on Virgin Island.

“We might end up losing our livelihood because of what they (Colubios) did to us. Many vendors will be affected,” Clenista said.

Vendors brought their stalls and food from mainland Panglao to Virgin Island. They would set them up in the morning and take them down at the end of the day.

“There is no overpricing here. That’s really the price of the food,” he said in Cebuano.

Despite the viral complaint, tourists kept on swarming Virgin Island on Tuesday.

For Mylene Dayuta, 41, from Imus, Cavite, travel taught her to be flexible.

When asked if the price was right, she said the food was worth the money.

(The food is not that expensive. The price is right. The experience of visiting this wonderful sandbar is priceless).