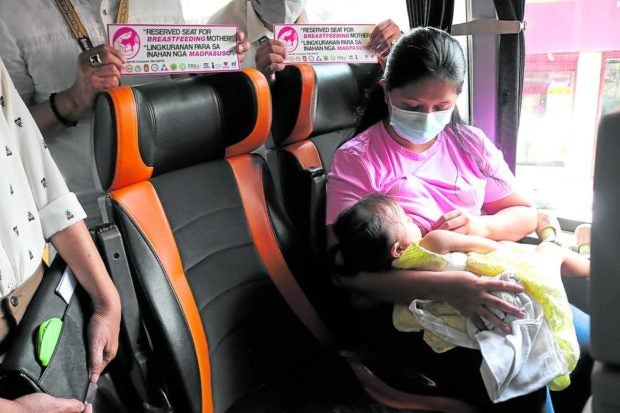 DEDICATED AREA | A mother breastfeeds her child inside a bus during the Aug. 1 launching in Cagayan de Oro City of the designated seats for breastfeeding mothers in public buses in Northern Mindanao. (CONTRIBUTED PHOTO)

CAGAYAN DE ORO CITY, Misamis Oriental, Philippines — Commuter buses here have started reserving seats for breastfeeding moms, a move first implemented in Northern Mindanao but which the Land Transportation Franchising and Regulatory Board (LTFRB) in the region hoped would be replicated as standard for all bus companies across the country.

“This is a very good practice that should be emulated by other LTFRB regional offices. What we have introduced here in Region 10 can be made as a benchmark [for all buses in the country],” said Aminoden Guro, LTFRB-10 regional director.

Reserving seats for lactating mothers will protect and give them dignity inside public buses, he said. “This will [be] convenient to mothers who need to breastfeed their children inside the bus,” he added. “We can expect this to be adopted nationwide, I will have it on the agenda in our next regional management conference so all regional offices can use it as a template. I hope it will be implemented nationwide soon,” Guro said.

The policy to offer seats to breastfeeding mothers was first broached at the Regional Development Council (RDC) here, which in 2020 issued Resolution No. 91 in support of the proposal by the Department of Health (DOH) in the region to include public buses in the implementation of Republic Act No. 10028 (Expanded Breastfeeding Promotion Act of 2009), which encourages, protects and supports the practice of breastfeeding.

One of the mandates of RA 10028 is the establishment of lactation stations accessible to breastfeeding women, either in health facilities or non-health establishments, including public places and public utility vehicles, according to the RDC resolution.

In 2019, the regional DOH had asked the LTFRB to implement the proposal but the COVID-19 pandemic that struck in March 2020 had put it on hold.

On July 23 this year, the LTFRB in the region issued a provisional order directing operators of public utility buses to reserve seats, indicated by a sticker or sign, for lactating mothers.

Guro said bus operators who would refuse to provide a seat for a lactating mother would face a penalty of P5,000 for the first offense; P10,000 for the second offense; and P15,000 for the third offense and the possibility that their franchise would be canceled or revoked.

At least five companies, including the Bachelor Express, one of Mindanao’s biggest bus companies, have committed to following LTFRB’s new policy.

Did You Know: August is National Breastfeeding Awareness Month