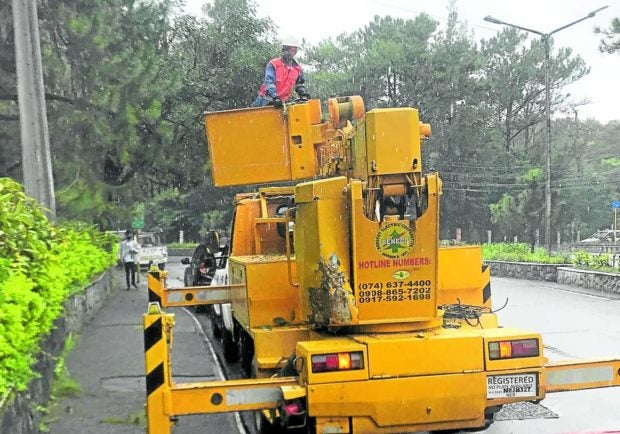 ALL-WEATHER | It’s work as usual for a team from Benguet Electric Cooperative (Beneco) despite rains in Baguio City in late July. Beneco is locked in a leadership dispute with the National Electrification Administration that has escalated into the freezing of the utility’s bank accounts, drawing condemnation from local officials as the cooperative has been defaulting on payments to its power supplier. (Photo by VINCENT CABREZA / Inquirer Northern Luzon)

BAGUIO CITY, Benguet, Philippines — One of the banks dragged into a leadership tussle between the power utility here and its regulator has been restrained by a local court from releasing to unauthorized persons the funds deposited on the electric cooperative’s account, allowing only current managers to access the money.

The restraining order against Bank of the Philippine Islands (BPI) issued by Baguio Regional Trial Court (RTC) Branch 7 Judge Cecilia Corazon Dulay-Archog on July 25 will lapse on Aug. 14, but Archog is currently hearing arguments related to a petition for a permanent injunction filed by Benguet Electric Cooperative (Beneco) against the bank.

The court ruling stemmed from a case filed by Beneco against BPI for violating the Bank Secrecy Law when BPI allowed “strangers” associated with the National Electrification Administration (NEA) to have full access to the utility’s deposits and for breach of contract when it permitted unauthorized individuals to withdraw P8.5 million from its account, which has Beneco manager Melchor Licoben and board president Esteban Somngi as authorized signatories.

BPI had told the court that “[the bank] was legally constrained to recognize the authority of NEA to suspend the authorized signatories in the Beneco account” and to recognize Ana Maria Paz Rafael.

The court, in its temporary restraining order (TRO), however, ruled that BPI was being “restrained from allowing any withdrawals by nonsignatories from the Beneco account.”

The bank’s action came amid an ongoing legal battle between Beneco and NEA, when the power utility sued the regulatory body for supposedly violating its own rules when it replaced Licoben with Rafael.

Archog stressed the court was “[not] recognizing engineer Licoben as the duly elected general manager of Beneco,” as this issue was still pending before the Court of Appeals.

“[The TRO] is only saying that Licoben is currently dispensing the actual functions of a general manager, as in fact, it was admitted that he undertakes the day-to-day and usual operations of Beneco, including the payment of its obligation to Beneco’s power suppliers,” she said.

Archog’s ruling stressed: “The Court takes paramount consideration of the nature of the services provided by Beneco as being vested with public interest. And considering further that its operations are actually under the leadership of engineer Licoben, this Court is constrained to issue a temporary restraining order good for 20 days to restrain defendant from further allowing the withdrawal of funds from what it termed as the Beneco-Licoben account.” 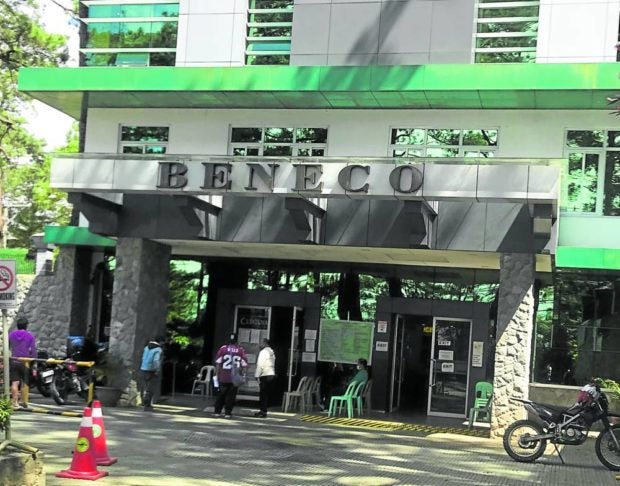 CENTER OF DISPUTE | The main office of the Benguet Electric Cooperative (Beneco) on South Drive, Baguio City, was briefly taken over by a management team appointed by the National Electrification Administration (NEA) in October 2021. Operations have since returned to normal as Beneco and NEA elevate their dispute to the Court of Appeals. (Photo by VINCENT CABREZA / Inquirer Northern Luzon)

Seven banks, including BPI, have frozen access to Beneco funds. RTC Branch 60 in Baguio is handling a similar complaint filed by Beneco against the Land Bank of the Philippines, which has been accused of releasing P58 million that was meant for Benguet’s sitio electrification program funded by NEA. Philippine National Bank is the third government bank charged in court for breach of contract involving the alleged anomalous withdrawal of over P1 million.

Summit Bank, China Bank Corp., and China Savings Bank have filed interpleaders or petitions asking courts to determine who had legal access to Beneco accounts in their bank.

“The cooperative has already defaulted on payments to its power suppliers,” De Jesus revealed, adding: “Penalties from power suppliers… will be passed on to consumers — or worse — there would be province-wide blackouts because [without the utility’s operating funds] the cooperative will continue to default on their power supply agreements.”

Philreca has been supporting Beneco’s right to appoint its own manager.

In a separate statement, Baguio Mayor Benjamin Magalong said suppressing Beneco’s funds was an “unconscionable and despicable act” that will affect Baguio residents. “Pending the decision of the court, this leadership issue must in no way compromise the people of Baguio and other consumers’ interest and right to efficient and dependable service pursuant to Beneco’s status as a gold standard electric cooperative,” the mayor said.