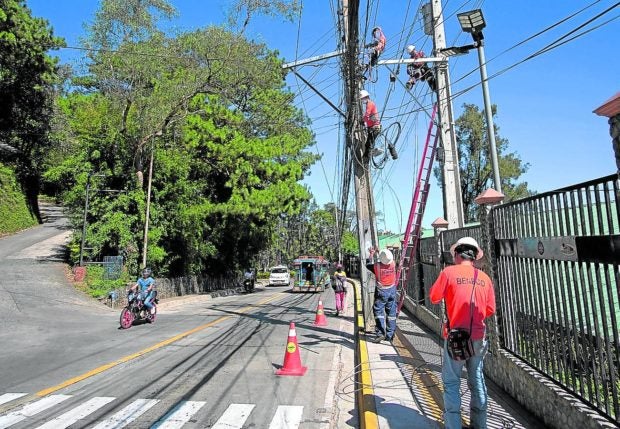 LINE CHECK Employees of the Benguet Electric Cooperative continue doing maintenance and repair work of power lines in Baguio City to ensure a stable electricity supply in the summer capital and Benguet province amid a leadership dispute affecting the utility. —NEIL CLARK ONGCHANGCO

BAGUIO CITY, Benguet, Philippines — Government and private banks have become the new battleground of a leadership dispute between the power utility serving Baguio City and Benguet province and its government regulator.

In the civil lawsuit, Beneco general manager Melchor Licoben and board president Esteban Somngi also complained that PNB refused to honor checks paid to contractors and other business transactions.

PNB’s actions have disrupted Beneco’s operations which are “invested with public interest,” and have “unfairly exposed” the utility to litigation, the petition said.

Earlier on Christmas Eve, Beneco employees lined up at the Development Bank of the Philippines (DBP) to close their personal and payroll accounts as an act of protest.

PNB and DBP are among the seven banks that either froze Beneco’s accounts or have allegedly allowed withdrawals made by non-Beneco personnel.

The biggest of such withdrawals to date was a P58.5-million fund released to Beneco by the National Electrification Administration (NEA) for its sitio electrification program, which was drawn on Dec. 6 from the Land Bank of the Philippines.

In a Dec. 15 letter to LandBank Baguio branch manager Liza Melendez, Licoben said the branch office was now responsible should the money meant for Benguet residents be misused.

“The banks have been weaponized against Beneco,” Licoben said, adding that the NEA could declare it as an ailing rural electric cooperative and justify its takeover by crippling the utility.

Summit Bank, one of the private banks, had petitioned a local court for declaratory relief to determine who has control over the Beneco account in its custody.

Both PNB branch manager Ruth de Guzman and DBP branch manager Olivia Lora said they were not authorized to discuss the Beneco accounts when the Inquirer reached out to them on Wednesday.

But a bank source said recent decisions involving the utility emanated from their respective head offices. The same source said the Beneco issue had been discussed by the local bankers association because the Beneco-NEA dispute had “put all of us in a bind.”

The NEA and its board of administrators have drawn condemnation for the Oct. 18 takeover of Beneco’s headquarters in Baguio City using policemen, purportedly to install Licoben’s replacement, lawyer Ana Maria Paz Rafael.

Rafael resigned as assistant secretary of the Presidential Communications Operations Office in August to assume her duties as Beneco general manager after the NEA board declared her as its sole nominee for that post early this year.

Majority of the Beneco board, the utility’s general assembly and some local government officials had rejected Rafael due to questions about her eligibility and the alleged shortcuts taken by the NEA board to ensure her appointment.

The Beneco officials who opposed Rafael’s designation were subsequently placed under preventive suspension by the NEA. The police were instructed to prevent Licoben, Somngi and seven Beneco directors from entering the building on Oct. 18.

But the Beneco building was taken back by employees and members of the cooperative three days later.

The leadership controversy is being heard by local courts and the Court of Appeals.