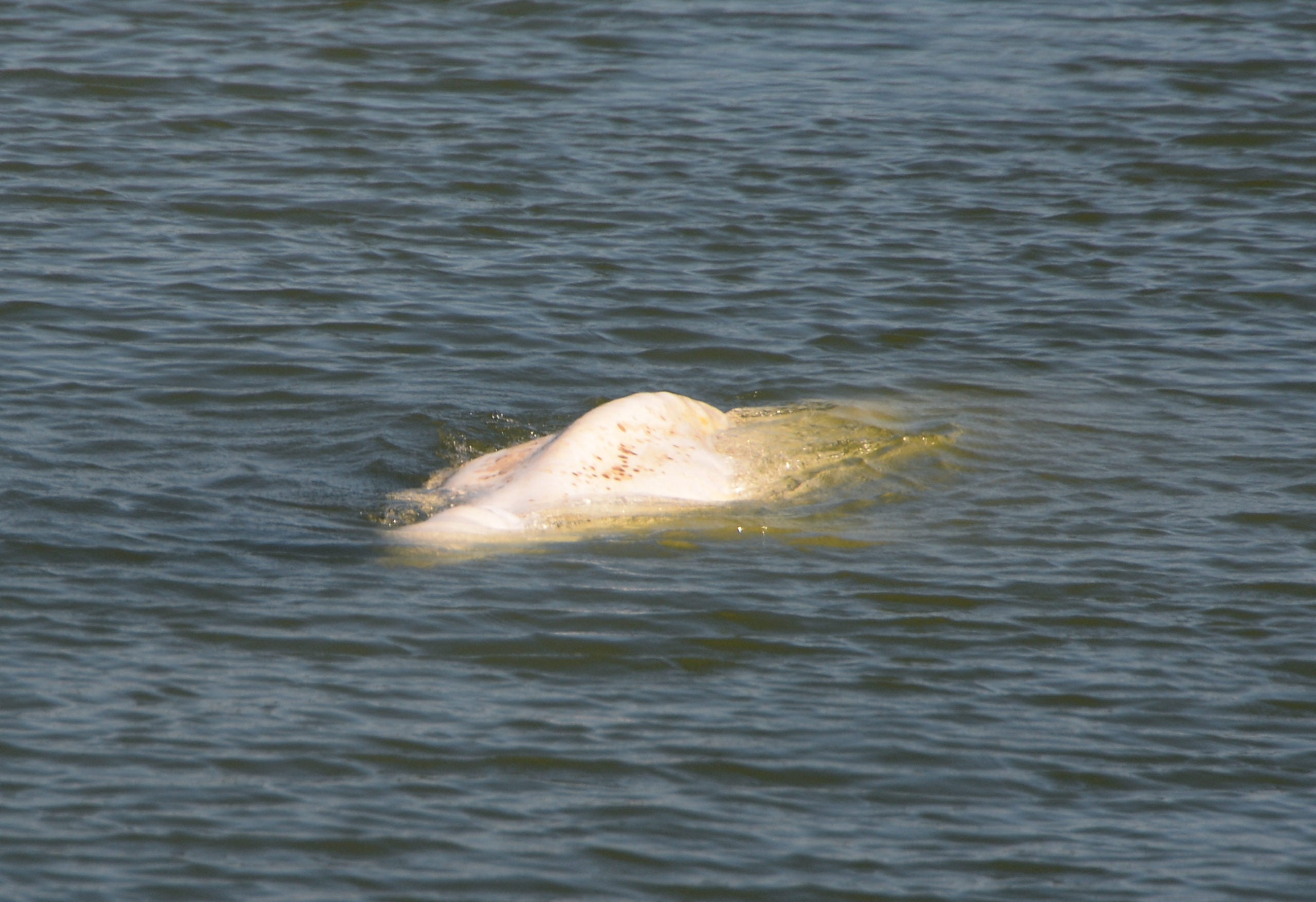 A beluga whale swims between two locks on the Seine river, in Notre-Dame-de-la-Garenne, northwestern France, on August 6, 2022.  (Photo by JEAN-FRANCOIS MONIER / AFP)

RENNES, France — Hopes of saving a malnourished beluga whale that has swum up the Seine river were receding on Sunday, but rescuers said they have ruled out “euthanasia” for now.

The whale was first spotted on Tuesday in the river that runs through Paris to the English Channel. Since Friday it has been between two locks some 70 kilometers (44 miles) north of the French capital.

But leaving it in the warm stagnant water between the lock gates is no longer an option.

“He has to be moved in the coming 24-48 hours, these conditions are not good for him,” Sea Shepherd France head Lamya Essemlali told AFP.

“We are all doubtful about its own ability to return to the sea,” she said. “Even if we ‘drove’ it with a boat, that would be extremely dangerous, if not impossible”.

However, “the euthanasia option has been ruled out for the moment, because at this stage it would be premature,” she said.

The whale still has “energy … turns its head, reacts to stimuli”, she said after a meeting of experts and French officials.

Although rescuers have tried feeding it frozen herring and then live trout, the animal was refusing the food.

“His lack of appetite is surely a symptom of something else… an illness. He is malnourished and this dates back weeks, if not months. He was no longer eating at sea,” Essemlali said.

Small spots that were reported on  its pale skin on Saturday were likely due to the fresh water, Sea Shepherd said.

Another option under consideration would be to take it out of the water, give it vitamins, check the cause of the illness and ship it out to sea to feed.

Belugas are normally found only in cold Arctic waters, and while they migrate south in the autumn to feed as ice forms, they rarely venture so far.

An adult can reach up to four meters (13 feet) in length.

According to France’s Pelagis Observatory, specialized in sea mammals, the nearest beluga population is off the Svalbard archipelago, north of Norway, 3,000 kilometers (1,800 miles) from the Seine.

It is only the second recorded sighting of a beluga in a French river since 1948, when a fisherman in the estuary of the Loire river found one in his nets.

The sighting comes just a few months after a killer whale — also known as an orca, but technically part of the dolphin family — became stranded in the Seine and was later found dead between Le Havre and Rouen in late May.

An autopsy found the animal, more than four meters long, had likely suffered exhaustion after being unable to feed.

Officials said they had also discovered a bullet lodged in the base of its skull — though it was far from clear that the wound played a role in its death.

Read Next
Desperation deepens for families of trapped Mexican miners
EDITORS' PICK
Percy Lapid’s kin: ‘We demand that his cowardly assassins be brought to justice’
Nothing’s certain so here’s how everyday Filipinos can make the most out of their Plan B
Do all the things you do, faster
PNP vows to bring justice for slain Percy Lapid; says probe underway
House energy committee chair Arroyo bats for cheap electricity
‘Seniority’ requirement despite vacant posts in DOH bothers senators
MOST READ
Student stabs teacher dead in Samar town
Trixie Angeles quits as press secretary due to health reasons
Not rehired?: Trixie Angeles not on list of reappointed Cabinet execs
Heart Evangelista to stay abroad ‘indefinitely’: ‘Hindi muna ako babalik’
Don't miss out on the latest news and information.