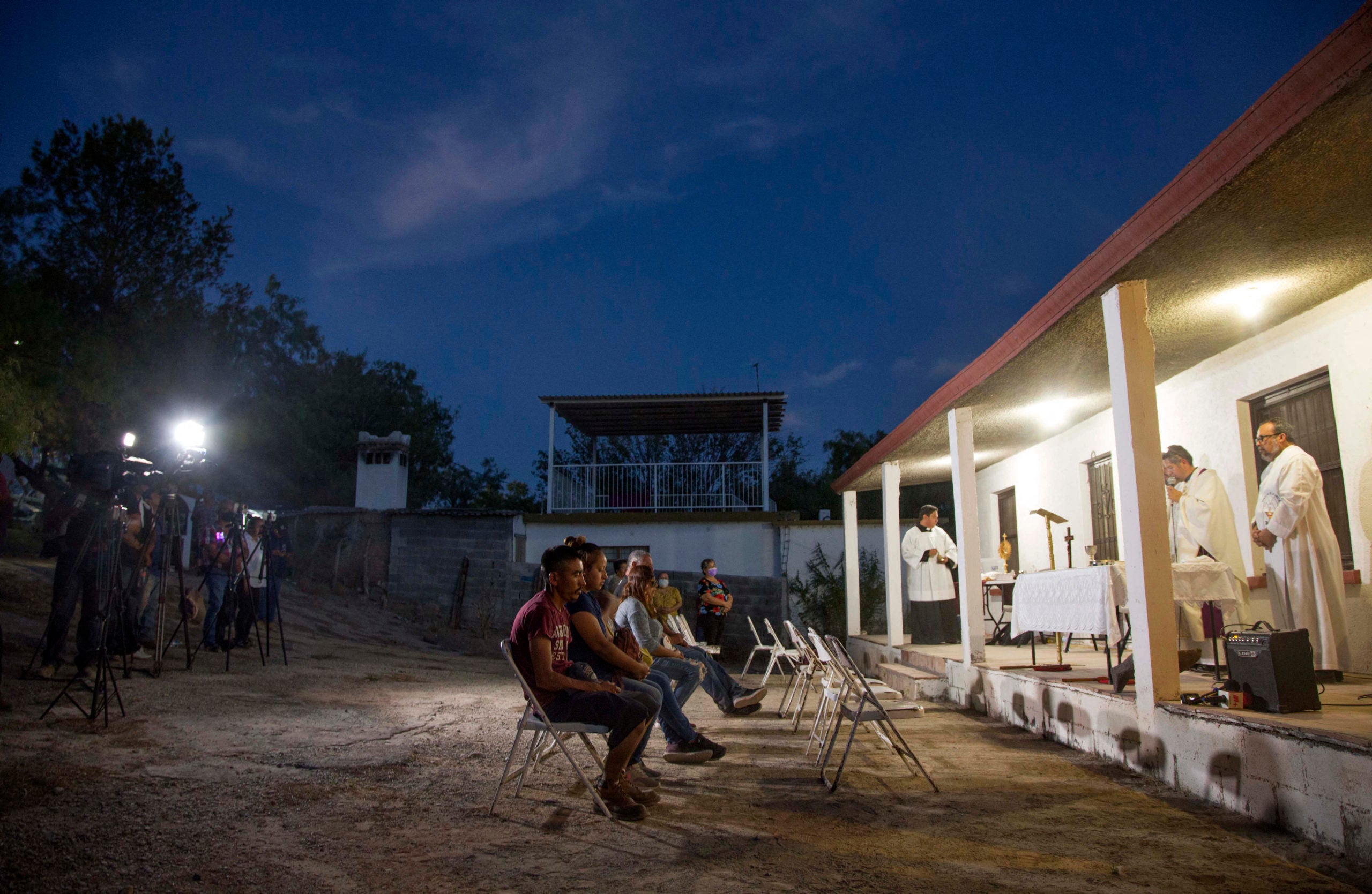 Relatives of 10 miners trapped since Wednesday after a collapse at a coal mine attend a Mass as rescue operations are being carried out at the flooded mine, in the community of Agujita, Sabinas Municipality, Coahuila State, Mexico, on August 6, 2022. Photo by Julio Cesar AGUILAR / AFP)

More than 300 soldiers and other personnel, including six military scuba divers, have joined the bid to free the miners in the northern state of Coahuila following Wednesday’s accident, the government said.

Liliana Torres, the niece of one of the 10 workers, told reporters on Saturday night that she had witnessed the relentlessness of rescuers who “do not stop all day”, but added that the families were increasingly “desperate”.

The water inside the flooded mine has only receded about 9.5 meters (31 feet) from the initial 34 feet, according to a report given to the relatives by the authorities at the end of Saturday’s effort, and divers have been unable to enter.

“According to the experts, we’ll know if it’s possible for the divers to enter safely,” he tweeted.

The main problem has been the flooding, he said, adding that the pumping equipment was working at full capacity.

After Saturday ended without success, some families joined a mass near their improvised camp in the community of Agujita.

The Coahuila State prosecutor’s office said it had interviewed the five workers who managed to escape from the crudely constructed mine.

“Apparently they were expelled by a torrent of water,” Coahuila attorney general Gerardo Marquez told the press.

He added that his office had requested information from the landowner and mine concession holder, but declined to name them.

Authorities said that the miners had been carrying out excavation work on three mine shafts that descended 60 meters (200 feet) when they hit an adjoining area full of water.

Experts detected a leak coming from nearby mines and are trying to find its exact location so they can stop water from flowing into the area where the workers are trapped, said Coahuila’s labor secretary, Nazira Zogbi.

A French company has provided equipment to assist in the task, she said, without naming the firm.

The arrival of more powerful pumping equipment was a reason for optimism, Zogbi said.

Water seen flowing from the mine through drainage channels had initially lifted the hopes of relatives anxiously awaiting news.

“We’re still hoping that they’re in a higher part (of the mine), although there’s too much water… but we trust in God,” Elva Hernandez, mother-in-law of one of the trapped workers, told AFP.

Coahuila, Mexico’s main coal-producing region, has seen a series of fatal mining accidents over the years.

Last year, seven miners died when they were trapped in the region.

The worst accident was an explosion that claimed 65 lives at the Pasta de Conchos mine in 2006.

Only two bodies were retrieved after that tragedy.

Miners and their relatives painted a picture of a precarious profession fraught with risks due to lax safety standards.

“When everything’s fine, you don’t think about the danger, but when things happen you think about quitting,” said Luis Armando Ontiveros.

However, looking for a new job does not seem like a viable option for the 48-year-old, whose father taught him to dig for coal at an early age.

The father-of-three said he needed the monthly salary equivalent to about $500 to pay for his children’s education so they do not have to follow in his footsteps.