France to give vitamins to beluga stranded in the Seine 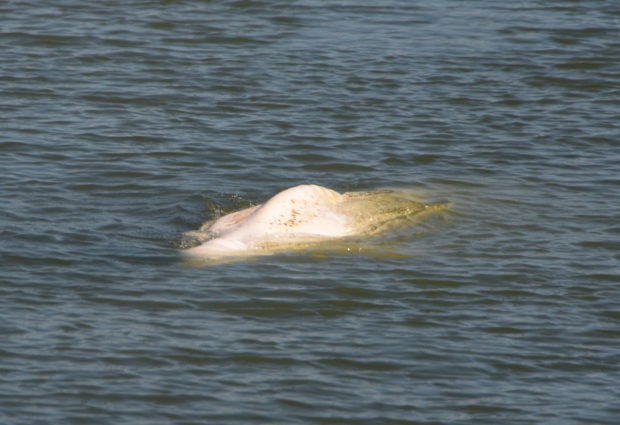 A beluga whale swims between two locks on the Seine river, in Notre-Dame-de-la-Garenne, northwestern France, on August 6, 2022. AFP

RENNES, France — French authorities were preparing Saturday to give vitamins to a beluga whale that swam way up the Seine river, as they raced to save the malnourished creature, which has so far refused food.

The visibly underweight whale was first spotted Tuesday in the river that flows through Paris to the English Channel. On Saturday it had made its way to around 70 kilometers (44 miles) north of the French capital.

“It’s quite emaciated and seems to be having trouble eating,” Isabelle Dorliat-Pouzet, a senior police official in the Eure department in Normandy, which is overseeing the rescue operation, told journalists.

Rescuers had tried feeding it frozen herring and then live trout, but it did not seem to accept either, she said.

It is hoped that injecting the animal with vitamins will stimulate its appetite, she said.

Authorities were deciding whether to keep the animal in the waterway so it could regain its appetite or guide it back toward the sea, she said, adding that no decision has yet been taken.

She said that small spots had appeared on its pale skin, but that scientists hadn’t yet determined whether these were a natural occurrence because of the fresh water or signs of health difficulties.

On Friday, Gerard Mauger of the GECC marine conversation society told AFP that despite being a notably sociable mammal, “it is behaving the same as yesterday, it seems very skittish. It rises to the surface only briefly, followed by long dives.”

Based on sonar recordings, it was also emitting very few of the chirps and quicks the whales are known for, raising further concerns about the animal’s health.

Mauger appealed to the public to stay away from the animal.

“Even trying to approach it with a lot of precautions, it’s difficult,” he said.

Belugas are normally found only in cold Arctic waters, and while they migrate south in the autumn to feed as ice forms, they rarely venture so far.

An adult can reach up to four meters (13 feet) in length.

It is only the second recorded sighting of a beluga in a French river since 1948, when a fisherman in the estuary of the Loire river found one in his nets.

The sighting comes just a few months after a killer whale — also known as an orca, but technically part of the dolphin family — became stranded in the Seine and was later found dead between Le Havre and Rouen in late May.

An autopsy found that the animal, more than four meters long, had likely suffered exhaustion after being unable to feed, though officials said they had also discovered a bullet lodged in the base of its skull — though it was far from clear that the wound played a role in its death.