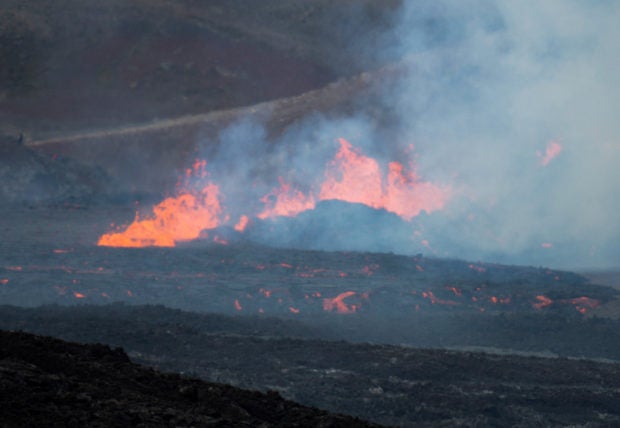 Lava flows at the scene of the newly erupted volcano at Grindavik, Iceland on August 3, 2022. AFP

COPENHAGEN — A volcano has erupted on a mountain near Iceland’s capital Reykjavik after days of rising earthquake activity in the area, the Icelandic Meteorological Office (IMO) said on Wednesday.

Images and livestreams by local news outlets MBL and RUV showed lava and smoke spewing from a fissure in the ground on the side of the Fagradalsfjall mountain, which last year saw an eruption that lasted six months.

Tourists and residents should avoid the area due to poisonous gases, although there was no immediate risk of damage to critical infrastructure, the Department of Civil Protection and Emergency Management said in a statement.

A “code red” was declared to prohibit airplanes from flying over the site although helicopters were sent in to survey the situation, the IMO told Reuters.

If the outbreak was confirmed to be similar to the fissures seen last year, the aviation alert would likely be lowered to orange, signalling less danger, an agency spokesperson said.

“Currently, there have been no disruptions to flights to and from Iceland and international flight corridors remain open,” the country’s foreign ministry said in a statement.

The Reykjanes Peninsula is a volcanic and seismic hot spot, and the outbreak took place just 25 km (15 miles) from Reykjavik and 15 km from the nation’s international airport.

In March last year, lava fountains erupted spectacularly in the area from a fissure 500 to 750 meters (1,640 to 2,460 feet) long, continuing until September and attracting thousands of Icelanders and tourists to the scene.

Unlike the eruption in 2010 of the ice-covered Eyjafjallajokull volcano, which halted some 100,000 flights and forced hundreds of Icelanders from their homes, this eruption is not expected to spew much ash or smoke into the atmosphere.

Located between the Eurasian and the North American tectonic plates, among the largest on the planet, Iceland frequently experiences earthquakes and has high volcanic activity as the two plates move in opposite directions.

Iceland raises alert level for its most active volcano