Fidel Ramos’ family thanks gov’t for assistance in wake, burial 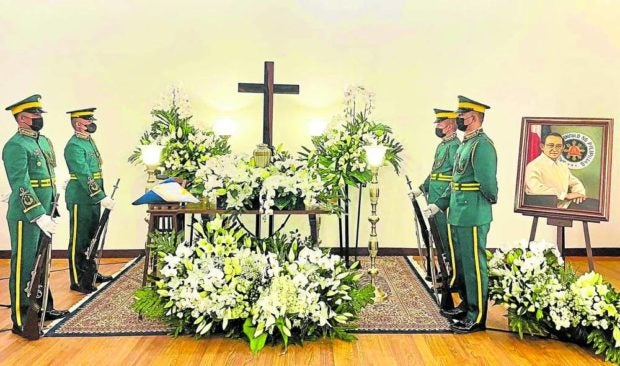 OFFICER AND GENTLEMAN The late former President Fidel V. Ramos, his cremated remains held for viewing at Heritage Park, Taguig City, will be given a state funeral after a 10-day period of national mourning following his death on July 31.

MANILA, Philippines — The family of the the late Fidel V. Ramos expressed gratitude to government agencies for assisting them in the observance of the former president’s wake and state burial.

In a statement released Thursday, the Ramos family said that former and incumbent officials from the three branches of government will be welcomed during the wake.

“The Ramos family would like to thank the Office of the President and other agencies of government for providing assistance and support in ensuring the peaceful, orderly and safe observance of the wake and state burial of Former President Fidel V. Ramos,” the kin said.

“Former First Lady Amelita ‘Ming’ M. Ramos and family will be receiving current and past leaders from the Executive, Legislative and Judiciary during the wake,” they added.

The former chief executive’s wake is set on August 4 to 8 at the Heritage Park in Taguig City, the family earlier announced.

Ramos, the 12th Philippine president, will receive a state funeral with full military honors on August 9. His remains will be laid to rest at the Libingan Ng Mga Bayani.

Malacañang has declared a 10-day Period of National Mourning from July 31 to August 9 for Ramos’ demise.