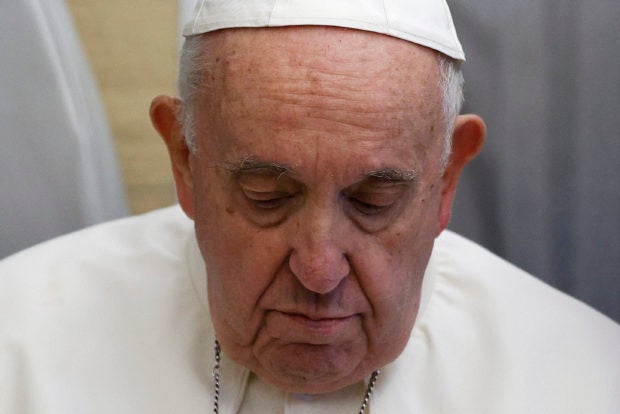 Pope Francis looks down during a news conference aboard the papal plane on his flight back after visiting Canada, July 29, 2022. AFP

VATICAN CITY — Pope Francis on Wednesday likened hearing first-hand tales of abuse at Catholic-run schools from Indigenous victims in Canada to being slapped.

Many children were physically and sexually abused at the schools, and thousands are believed to have died of disease, malnutrition or neglect in what Francis said after his Canada trip was “genocide”.

The pontiff returned Saturday from a six-day visit where he met representatives of the First Nations, Metis and Inuit people to apologise for what he called the “evil” committed at Catholic-run residential schools.

“I assure you that in these meetings, particularly the last one, I had to feel — like slaps — those people’s pain,” Francis said during the weekly general audience at the Vatican.

The 85-year old said hearing from “elderly people who lost children, who don’t know where they are” was “a painful moment”.

He wrapped up his Canadian journey Friday in the capital of the vast northern territory of Nunavut, Iqaluit, where he once again asked forgiveness for abuse at the 139 residential schools run by the church.