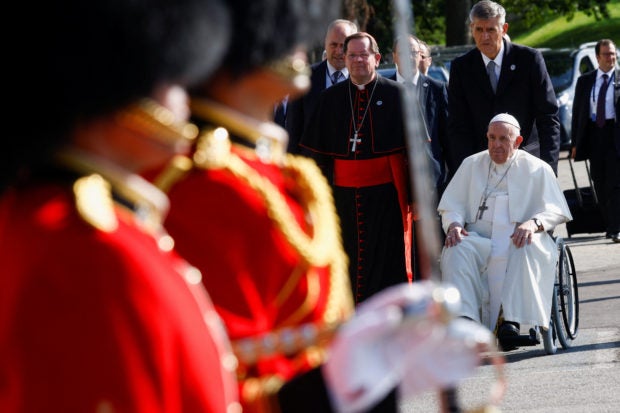 Pope Francis attends a welcome ceremony at the Residence of the Governor General of Canada at the Citadelle in Quebec City, Canada July 27, 2022. REUTERS

QUEBEC CITY — Canada’s leaders on Wednesday pointedly told Pope Francis of the horrors of Church-run residential schools for indigenous and the pontiff lamented that many were still living in poverty in one of the world’s richest countries.

Francis flew east across the country from Edmonton in the prairies of Alberta to Quebec on the St. Lawrence River for meetings with the country’s leadership in one of the oldest cities in the Americas.

Francis is on an apology tour of Canada, seeking forgiveness for the Catholic Church’s role in residential schools that carried out government policies aimed at assimilating natives by trying to erase their cultures.

More than 150,000 indigenous children were separated from their families and brought to residential schools, which operated between 1870 and 1996. They were starved or beaten for speaking their native languages and sexually abused in a system that Canada’s Truth and Reconciliation Commission called “cultural genocide”.

Addressing government officials, including Prime Minister Justin Trudeau at the Citadelle de Quebec, the largest British fortress built in North America, Francis spoke of “the radical injustice” of the unequal distribution of wealth.

“It is scandalous that the wellbeing generated by economic development does not benefit all the sectors of society,” he said, noting that many needy people or homeless had to turn to churches and food banks to survive. 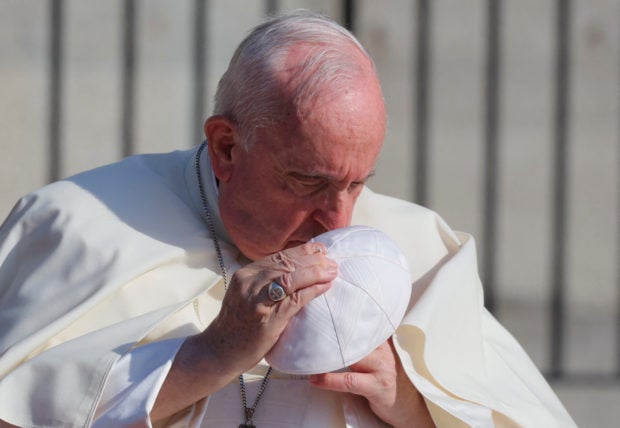 “And it is indeed sad that precisely among the native peoples we often find many indices of poverty, along with other negative indicators, such as the low percentage of schooling, and less than easy access to owning a home and to health care,” he said.

Indigenous people, who make up about 5 percent of Canada’s population, have higher levels of poverty and a lower life expectancy than other Canadians, and are more often victims of violent crime, and more likely to suffer from addiction and be incarcerated.

In their addresses to the pope, both Trudeau and Governor General Mary Simon, who represents Queen Elizabeth II, poignantly and pointedly told him of the tragedies that unfolded in the schools, the last of which closed nearly two decades before Francis became pope.

“As a dad, I can’t imagine having my children being taken away. When my kids are crying, I can console them. When they’re happy, I can share that feeling of joy with them,” Trudeau said.

“But in residential schools, these children were alone and isolated in their pain and sorrow, far from their families and communities. And even worse, stripped of their language, their culture, their identity,” the prime minister said.

At the Citadelle, Trudeau, who has made reconciliation with Canada’s indigenous peoples one of his political priorities, and Simon greeted the pope along with an honor guard wearing red uniforms and black bearskin caps.

“With this visit you’re signaling to the world that you and the Roman Catholic Church are joining us on our path of reconciliation, healing, hope and renewal,” Simon said.

“But these people, these survivors, they defy definition. They are parents who defended their children when no one else would. They are advocates who fought, and are still fighting, for their languages and cultures so that they can thrive for generations to come,” she said. 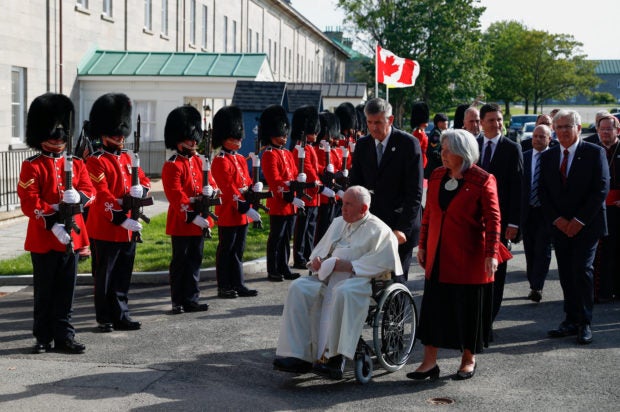 The pope said the Church was “admitting our faults” and wanted to join civil authorities “to promote the legitimate rights of the native populations and to favor processes of healing and reconciliation” between indigenous and non-indigenous Canadians.

On Monday, the pope traveled to the town of Maskwacis, the site of two former schools, and issued a historic apology that called the Church’s role in the schools, and the forced cultural assimilation they attempted, a “deplorable evil” and “disastrous error”.

On Tuesday, he said the Roman Catholic Church should accept institutional blame for the harm done to indigenous Canadians.

On Thursday, Francis will visit the Sanctuary of Sainte-Anne-de-Beaupre, the oldest Catholic pilgrimage site in North America, and meet the archbishop of Quebec, Canada’s largely French-speaking province, in the Notre-Dame de Quebec Cathedral.

On his way back to Rome on Friday, he will stop for a few hours in Iqaluit in the Canadian Arctic, where the pope is expected to discuss the threat that climate change poses to indigenous communities.