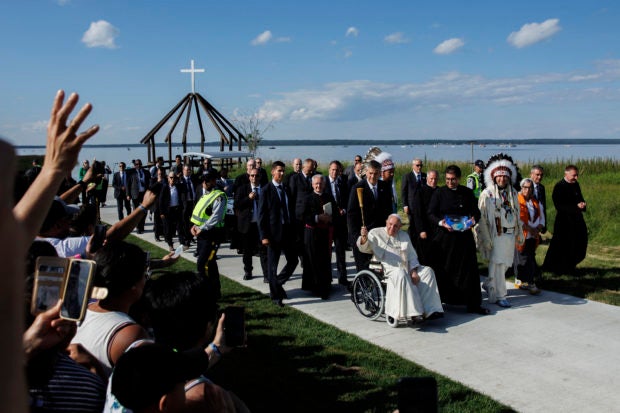 Pope Francis blesses people in the crowd with the water from Lac Ste. Anne on July 26, 2022 in Lac Ste. Anne, Canada. AFP

LAC STE ANNE, Canada — Pope Francis called for “healing” Tuesday as he joined a pilgrimage to a sacred lake in Canada, one day after making a landmark apology for the abuse of Indigenous children at Catholic-run schools.

The 85-year-old pontiff prayed for the Church to choose “truth” over “defending the institution” as he visited Lac Ste Anne, some 80 kilometers (50 miles) west of Edmonton, where some of Canada’s Indigenous people began their relationship with Catholicism generations ago.

The lake is one of the most important pilgrimage sites in North America. Every year since the end of the 19th century, thousands of pilgrims mainly from Canada and the United States have come to bathe and pray in the healing waters, according to Indigenous rites.

Hundreds of faithful, many of them Indigenous, fell silent as the pope, who has been suffering with knee pain, was wheeled carefully to the water’s edge and prayed in silence there for several minutes.

He was then wheeled to a shrine, sprinkling some of those assembled with water he had blessed from the lake on the way, as Indigenous people drummed and chanted. 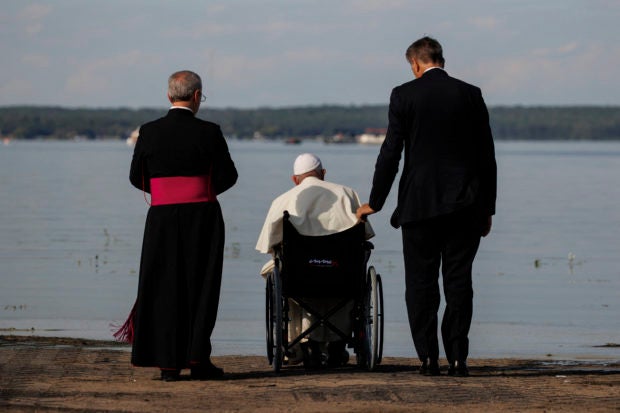 Pope Francis sits at the shore and blesses the water of Lac Ste. Anne as he makes the pilgrimage to the lake on July 26, 2022 in Lac Ste. Anne, Canada. AFP

Lamenting the “terrible effects of colonization, the indelible pain of so many families, grandparents and children,” Francis told those gathered for a liturgical celebration that their presence was “testimony of resilience and a fresh start.”

“All of us, as (a) Church, now need healing: healing from the temptation of closing in on ourselves, of defending the institution rather than seeking the truth,” the pope continued.

Tuesday marked the second day of what Francis has called a “penitential” journey, a major tour of Canada which he began Monday with the long-awaited apology to a gathering of Indigenous people in the community of Maskwacis, south of Edmonton.

From the late 1800s to the 1990s, Canada’s government sent about 150,000 children into 139 residential schools run by the Church, where they were cut off from their families, language and culture.

Many were physically and sexually abused, and thousands are believed to have died of disease, malnutrition or neglect.

‘Part of a process’

For some, the healing had already begun.

Cindy Dearhead, a First Nations woman who was a student in one of the infamous schools, said she felt the pope’s apology was “important.” 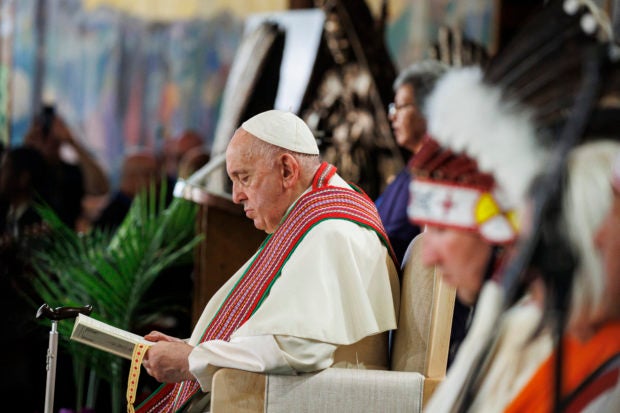 Pope Francis reads along at the Ste. Anne Shrine after making the pilgrimage to the lake on July 26, 2022 in Lac Ste. Anne, Canada. AFP

“It was a long time coming, but finally a pope himself is finally acknowledging yes, I’m sorry,” she told AFP at Lac Ste Anne.

“For those of us that suffered into generations of trauma, maybe we can have healing and can understand what our parents came through and maybe feel better.”

But for many others that healing may well depend on what comes next.

“I think the apology has always been one thing, part of a process of reconciliation. To me, the actions that need to come behind it are very important,” said Chief Peter Powder of the Mikisew Cree First Nations.

At Lac Ste Anne, the leader of the world’s 1.3 billion Catholics appeared tired and weakened by knee pain that has seen him use a wheelchair often in recent months.

His pilgrimage came hours after he delivered a mass to tens of thousands of people thronging a stadium in Edmonton, the capital of Alberta, one of the largest open-air events of his visit.

There he prayed for a “future in which the history of violence and marginalization suffered by our Indigenous brothers and sisters is never repeated.”

At both events traditional music filled the air, while Indigenous people in the crowd were recognizable by their orange shirts — intended to symbolize what they endured in the country’s infamous residential schools.

Francis greeted the crowds both times — in his wheelchair at the lake, and in the popemobile at the stadium — kissing babies and blessing children.

Since May 2021, more than 1,300 unmarked graves have been discovered at the sites of the former schools, sending shockwaves through Canada — which has slowly begun to acknowledge this long, dark chapter in its history.

More than 4,000 children have been identified as dying in the schools, but the true toll is estimated to be at least 6,000.

The abuse created trauma for generations.

On Wednesday the pope will fly to Quebec City, before ending his trip on Friday in Iqaluit, capital of the northern territory of Nunavut and home to the largest Inuit population in Canada.

There he will meet again with former residential school students, before returning to Italy.

Pope Francis in Canada: why his apology for school abuse will be significant

Read Next
Ateneo shooter’s gun traced to Army officer got lost in 2019 – AFP
EDITORS' PICK
House energy committee chair Arroyo bats for cheap electricity
Bongbong Marcos to slain journalist’s kin: ‘We are ready to help’
Score lots of freebies and discounts on vivo 10.10. Sale
Smart awards ‘Subscribe & Get Lucky’ Raffle Promo winners
10,000 to less than 500: How people are driving the tamaraw to extinction
Marcos wants to accelerate efforts to build agricultural sector back
MOST READ
34 people killed in mass shooting at daycare center in Thailand
Marcos admin gets high approval ratings in Pulse Asia survey
Tulfo blasts DBM for ‘acting like God’ in cutting budget
Woman shot dead by live-in partner in Laguna
Don't miss out on the latest news and information.