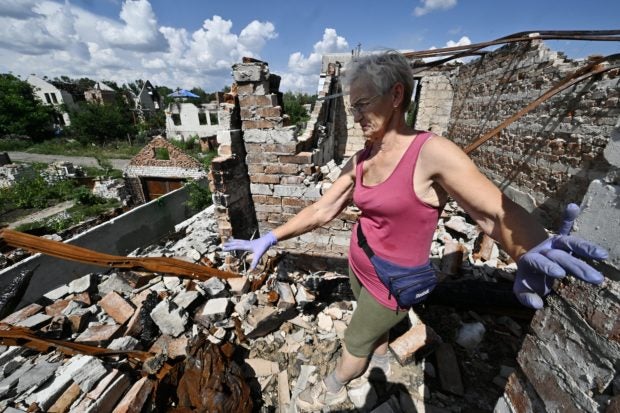 Galyna, 67, shows her heavily damaged house as she clears debris in the village of Mala Rogan, Kharkiv region on July 28, 2022, amid Russian invasion of Ukraine. AFP

MALA ROGAN, Ukraine — Galyna Kios had been surviving with family and neighbours in her gloomy basement, cooking on a makeshift wood-fired stove, when the Russians came.

The troops had been biding their time outside Mala Rogan, 32 kilometers (20 miles) from Ukraine’s northeast border with Russia, but decided to take the village two weeks into the war.

“You have to leave because we need the whole street,” Kios remembers the soldier telling her, just before the invading force took over her two-storey house.

The occupation was short-lived — the invaders were driven out by the Ukrainian army after a fortnight of fierce fighting — but it was enough time to leave Kios’s street in ruins.

“I saw what they had done to my home, what remained of it. What emotions could I afford? Material possessions are not worth your life,” the widowed mother-of-four, 67, told AFP.

“So I thought, ‘I’m happy, that with God’s will, I’m alive.’ Everything lost is material, we can rebuild or renew it.”

Since then she has been shovelling, sweeping, scouring and scrubbing — sometimes with family but often alone — like thousands of Ukrainians returning to liberated but ruined homes in the country’s east. 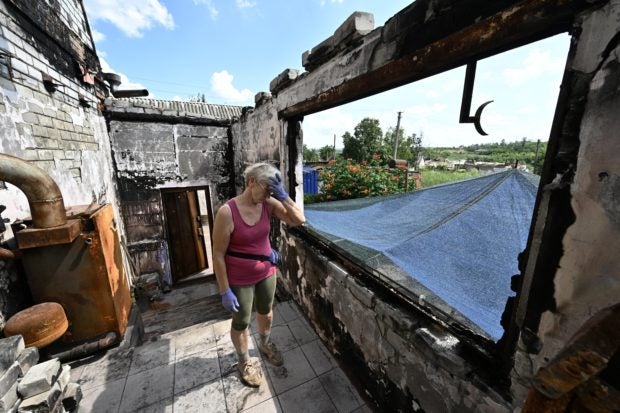 Galyna, 67, reacts as she clears her heavily damaged house of debris in the village of Mala Rogan, Kharkiv region on July 28, 2022, amid Russian invasion of Ukraine. AFP

The Kharkiv region of 2.7 million people that includes Mala Rogan saw 90 percent of housing destroyed in areas taken back from the Russians, local media reported in May, quoting the governor.

There are fewer than a dozen properties in Kios’s dusty road, and each bears the scars of battle — roofs gone, facades pockmarked by shrapnel or rifle fire, chunks bitten out.

At the top of the hill one house is so badly scorched it looks volcanic, obsidian walls rising above piles of personal effects and Russian soldiers’ boots.

Two houses have burnt-out armored vehicles in their driveways, one spray-painted with “Death to the enemy” in Ukrainian.

Nearby, a Soviet-era T-72 tank with its turret blown off lies decaying in the road, the cadaver of a once-formidable beast, greedily picked clean and abandoned to the elements.

Six explosions of varying intensity — almost certainly shell fire a few kilometres away — rang out as Kios worked through lunchtime.

A few houses down, Nadia Ilchenko had brought her daughter and nine-year-old granddaughter out to Mala Rogan at the start of the war.

She reasoned that it would be safer than staying at their home a short drive away in Kharkiv city, but soon realised she had misjudged the situation. 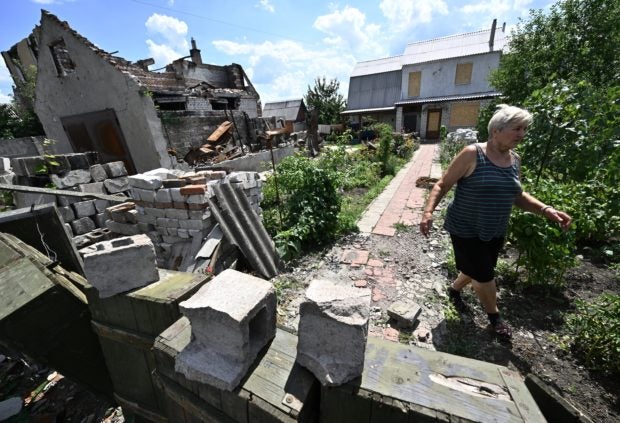 Nadia, 69, walks in a yard of her damaged house in the village of Mala Rogan, Kharkiv region on July 28, 2022, amid Russian invasion of Ukraine. AFP

Amid heavy shelling in the village, the 69-year-old sent them away again and fled with her husband on March 19.

During her exile, she glimpsed a video of her house smouldering, the garage destroyed along with a motorcycle and two kids’ bikes.

“I came back on May 19, and my blood pressure is still high. We have spent almost two months, me and my husband, trying to clean it,” she said.

Humanitarian volunteers helped out with removing the debris but the front of the property is still a mess and much work remains.

“The Russians were in our house and there is so much that was shot through, that burned down, that we cannot use anymore,” she said.

“The only thing I like now, the only thing that makes me warm, is the flowers in the garden — although they even parked a Russian tank on those.”

Ilchenko described her granddaughter’s traumatised reaction as they returned home.

“Why did they do this to you?” the young girl asked, surveying the mess before them.

“I told her I didn’t know and my granddaughter went into hysterics,” Ilchenko said.