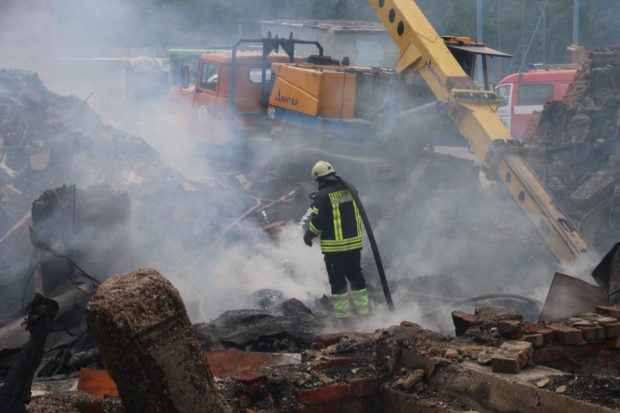 This handout picture taken and released by Ukrainian Emergency Service on July 31, 2022 shows a firefighter pushing out a fire in a building after shelling in Kharkiv, amid the Russian invasion of Ukraine. (Photo by Handout / UKRAINIAN EMERGENCY SERVICE / AFP)

PARIS —Here are the latest developments in the war in Ukraine:

Russian authorities in the Crimean Black Sea peninsula — seized by Moscow from Ukraine in 2014 — say a small explosive device from a commercial drone, likely launched nearby, hit the navy command in Sevastopol.

The local mayor blames “Ukrainian nationalists” for the attack that forced the cancellation of festivities in the city marking Russia’s annual holiday celebrating the navy.

But a spokesman for Ukraine’s Odessa region military administration denies Kyiv — whose nearest positions are some 200 kilometers (125 miles) away — is responsible, calling the incident “a sheer provocation”.

“Our liberation of Crimea from the occupiers will be carried out in another way and much more effectively,” spokesman Sergiy Bratchuk writes on Telegram.

“Mykolaiv was subjected to mass shelling today. Probably the strongest so far,” the city’s mayor Oleksandr Senkevych writes on Telegram.

The authorities say leading Ukrainian agricultural magnate Oleksiy Vadatursky, 74, and his wife Raisa were killed when a missile struck their house

Vadatursky, who was ranked Ukraine’s 24th richest man with a fortune worth $430 million by Forbes, owned major grain exporter Nibulon and was previously decorated with the prestigious “Hero of Ukraine” award.

A spokesman for the Turkish presidency says there is a “high probability” that a first ship carrying Ukrainian grain could leave Ukraine’s port of Odessa on Monday.

That is despite Russian missiles hitting the city in the wake of the July 22 agreement on shipping grain between Russia, Turkey, the UN and Ukraine.

“There is a strong possibility that a first ship could leave tomorrow morning if everything is sorted out by this evening,” Ibrahim Kalin says in an interview with Kanal 7 television Sunday.

Ukraine’s President Volodymyr Zelensky calls for the evacuation of the eastern Donetsk region which has seen fierce clashes between his country’s forces and the Russian military.

“There’s already a governmental decision about obligatory evacuation from Donetsk region. Please, follow evacuation. At this phase of the war, terror is a main weapon of Russia,” he says.

Official Ukrainian estimates put the number of civilians still living in the unoccupied area of Donetsk at between 200,000 and 220,000.

“The decision to leave should be taken at some point. The more people who leave Donetsk region now, the fewer people the Russian army will kill,” Zelensky says.

Kyiv and Moscow trade blame over strikes on a jail holding Ukrainian prisoners of war in Kremlin-controlled Olenivka.

Russia’s military says 50 Ukrainian servicemen died, including troops who had surrendered after weeks of fighting off Russia’s brutal bombardment of the sprawling Azovstal steelworks in the port city of Mariupol.

Ukraine says Russia was behind the attack, with Zelensky accusing the Moscow of the “deliberate mass murder of Ukrainian prisoners of war”.

Russia’s defence ministry says it has invited the International Committee of the Red Cross (ICRC) and the United Nations to visit the site “in the interests of an objective investigation”.