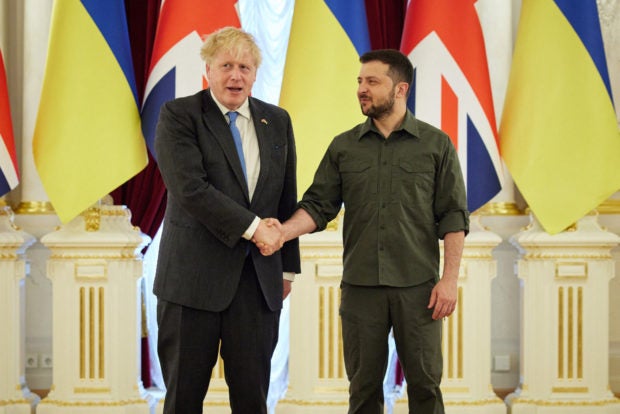 This handout picture taken and released by Ukrainian Presidential Press-Service on June 17, 2022, shows the Ukrainian President Volodymyr Zelensky (R) and Britain’s Prime Minister Boris Johnson, shaking hands prior to talks during his second visit to the capital Kyiv since the beginning of Russia’s full-scale invasion on February 24 2022. (Photo by UKRAINIAN PRESIDENTIAL PRESS SERVICE / AFP)

In an interview airing Wednesday with Britain’s TalkTV, Zelensky also reaffirmed his hope that US President Joe Biden will join other Western leaders including Johnson who have made their way to Kyiv.

Biden failed to do so on two trips to Europe this year, but Zelensky said via an interpreter that a presidential visit “would be the strongest signal which can be given in support of Ukraine”.

Speaking alongside his wife Olena Zelenska, who welcomed US First Lady Jill Biden to western Ukraine in May, he noted such visits boost support in Washington for Kyiv’s struggle against Russia.

Johnson has made two surprise trips to Ukraine since the February invasion, including one last month, but is running out of time for a third before he is booted out of Downing Street in six weeks time.

After announcing his resignation in the face of a cabinet revolt, Johnson urged his eventual successor as Conservative leader and prime minister to continue his own outspoken support for Zelensky and Ukraine.

“I have no right to play in politics inside the UK. What I can say is he is a big friend of Ukraine,” Zelensky said in the interview with prominent TalkTV host Piers Morgan.

“I want him to be somewhere in politics in a position to be someone. I don’t want him to disappear, but the decision is in the hands of the British people,” he added of Johnson.

“But I am sure that whatever position he is going to take he is always going to be with Ukraine. This is from the heart.”

Zelensky noted that he had had contact with Liz Truss, one of the Conservative contenders running to replace Johnson, in her role as Britain’s foreign secretary.

But whether the race is won by Truss or by former finance minister Rishi Sunak, “I would be happy to cooperate very closely like we used to have with Boris”.