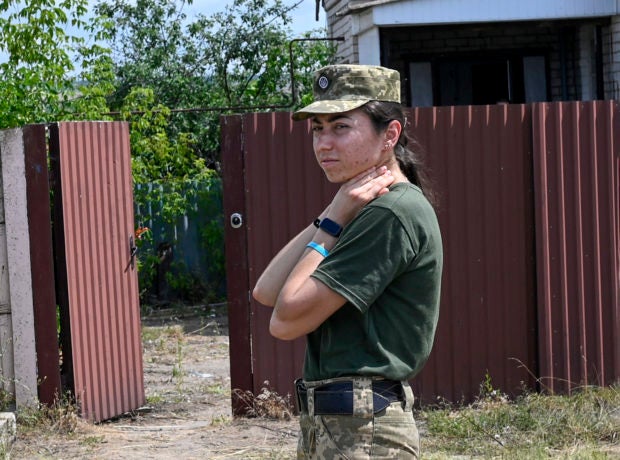 Kateryna Novakivska, 29, deputy commander of a unit in the Donbas region, eastern Ukraine, participates in an AFP interview on July 26, 2022, amid the Russian invasion of Ukraine. AFP

EASTERN UKRAINE — Kateryna never takes pictures with comrades before going to the front line — it’s bad luck. Karina does not tell her mother she is going to the front. Iana uses social media to try and raise the morale at home.

On another day of war in eastern Ukraine, the three are resting with their unit in a village before another rotation.

They agree to talk about their lives on the front line of a war they were not expecting, which has lasted more than five months — and felt like years.

Kateryna Novakivska, 29, is deputy commander of a unit in the Donbas, an industrial region in eastern Ukraine where fighting is raging.

The 29-year-old comes from Vinnytsia in central Ukraine, and had just graduated from an army academy when the war broke out. Her role is to provide the troops with moral and psychological support.

After speaking about the “satisfactory” morale among soldiers and the justness of Ukraine’s cause, she talks more personally about life on the front.

“The hardest thing for them is losing comrades,” she said.

For Kateryna, it is being able to distance herself from the soldiers’ horrific stories.

“They talk more easily with me because there are a lot of things that they cannot tell their loved ones,” she said.

Their biggest fear is being left behind on the battlefield — dead or wounded.

She remembers one day, May 28, when 11 soldiers were killed and around 20 went missing. In the chaos of war, some troops disappear and nobody knows what has happened to them.

Kateryna’s own greatest fear is being kidnapped by Russian soldiers, though she said she has “planned for everything”.

She has a small scar on her nose — left by an explosion in March.

The lotus flower tattoo on her forearm is a memory from her time in Volnovakha in 2017 — a town now in Russian-occupied territory that Kateryna said “no longer exists”.

On social media, Iana Pazdrii plays on the stereotypes of being a soldier, showing off her perfectly manicured nails as she drives an armoured vehicle or clutches a Kalashnikov.

The 35-year-old has been fighting since the start of the invasion in Ukraine and, like all her comrades, has not seen her child for five months.

“I volunteered because I am a patriot and I felt I could be useful here and I am,” said Iana, who speaks of the army as “a family”.

Whenever she has time, she posts little glimpses of military life on Instagram or TikTok.

“Some soldiers have to live on ‘line zero’ under shelling,” she said, using a term frequently used in Ukraine for the front line.

“I try to show that we are keeping up morale despite everything, to tell people not to be afraid and that the army is doing everything to defend the country.

“But to be honest, it’s hard sometimes.”

Dozens of soldiers are killed every day on Ukraine’s eastern front, where Russian forces made major advances in May and June, taking over almost the whole of the Lugansk region.

Since then, the front line has moved little, but ruthless artillery battles between the two sides have intensified.

Karina, a former textile worker of Tajik origin who signed up to the army in 2020 on a two-year contract, drives her armored vehicle back and forth from the front line.

“When we are in position, it’s hard thinking about fellow soldiers, hoping that nobody will be killed or wounded, that you yourself will not come under attack,” said the young woman, who is also a mechanic.

Her husband is anxiously waiting for her at home — but she said “nobody tells me what to do”.

When Karina calls her mother, she said: “I don’t tell her I’m at line zero and she pretends to believe me”.

Karina has no illusions — she does not think the war will be over soon.

“The Russians have already taken a lot of territory” in Ukraine, she said.

Her sister-in-arms Iana insisted there was no option but victory.

“Whatever happens, we will win. We do not have the right to lose,” she said.

After the war, Iana wants to travel to the Caribbean and South America.

“I need to fulfil my dreams. I think I deserve it,” she smiled.